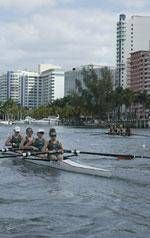 The Hurricanes came in fourth with 19 total team points. Virginia won the varsity 8+, second varsity 8+, and varsity 4+, and finished second in the novice 8+ for a total of 49 points and its sixth ACC title. Clemson finished second overall with 41 points as Duke came in third place with 24 points. North Carolina finished in fifth with 17 points.

The Virginia Cavaliers, who won three of four races on Saturday, have won the ACC title every year since its inception six years ago. Clemson ended Virginia’s stronghold on all the events by winning the novice 8+ race marking the first time the Cavaliers have been defeated in that race in six years.

Despite heavy wind conditions, Miami had its best showing in the Varsity 4+ race. The Hurricane crew of coxswain Meghan Leydecker, Julie Crane (4th), Mackenzie Dove (3rd), Jenny Dunning (2nd) and Marenda Chamberlin (1st) finished third with a time of 8:24.50. Virginia once again prevailed with a strong lead from start to finish ending with a time of 7:55.4. Clemson finished second for the third time in four races, coming in at a time of 8:06.3, while North Carolina (8:33.8) and Duke (8:53.8) completed the field in fourth and fifth, respectively.

The Hurricanes return to action Friday, April 29th when they compete against Duke on the waters of Indian Creek in Miami Beach.