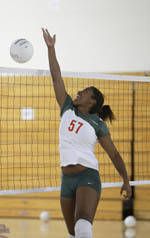 Miami won the first game on the strength of a .417 attacking percentage punctuated by two consecutive kills from senior rightside hitter Valeria Tipiana. Johnson hit eight of the team’s 20 kills in the game.

The Hurricanes fell behind early in the second game before Tipiana’s kill tied the score at 15-15. Her service ace in the next serve would give Miami the lead for good as they connected on 14 of 37 attempts for a .216 attacking percentage.

The Tigers turned the match around in the third game, holding the Hurricanes to .073 attacking percentage and 10 attacking errors; the lowest and highest of the match. Johnson and senior outside hitter Elizabeth Tyson lead the team with six and four kills respectively.

Both teams exchanged leads in the deciding game. The Hurricanes pulled to within one point after a Tipiana kill but a Miami service error let the Tigers regain the ball for the next two points and eventually the game.

The Hurricanes were plagued by attacking errors, suffering 32 as a team for a.193 team attacking percentage.

Robinson continued her record breaking trend by setting a new career record for digs in one match with a 16 dig performance. She also tallied two block assists and three kills.

Miami returns to action when they take on tournament host SMU at 7:00 pm (CST).