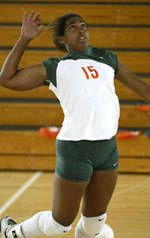 Hurricanes Fall to No. 22 Loyola Marymount, 3-0

Los Angeles, Calf. – The University of Miami women’s volleyball team (1-1) dropped their first match of the of the Furama Hotel Invitational, 3-0, to tournament host No. 22Loyola Marymount, Friday night at the Gersten Pavilion.

“Karla came up big for us and Frannie had a great match,” commented head coach Nicole Lantagne Welch.

The Hurricanes stayed close in the first two games, 30-26 and 31-29 before the Lions pulled away to close the match 30-18. Miami posted a .368 hitting percentage in game one.

Miami rallied in game two to tie the game at 27 after LMU jumped to an early 10-5 lead. But LMU held the Hurricanes to a .116 hitting percentage and took back-to-back points to win game two 31-29.

The Hurricanes could not stop a Lions rally in game three led by LMU’s Dina DeBernardi. LMU pulled away 16-9 before finally taking the game and the match.

The effects of Hurricane Frances were felt even two weeks later, “We battled the first two games and saw a lot of good things,”said Lantagne Welch. “It was unfortunate we didn’t play last week. While everyone was tuning up we weren’t practicing and that really hurt us tonight.”

The Hurricanes continue the Furama Hotel Invitational Saturday morning with a 10:00 am (PST) match against Washington State. Hurricane fans can follow through the WSU radio who will broadcast the game: http://wsucougars.collegesports.com/sports/w-volley/sched/wast-w-volley-sched.html