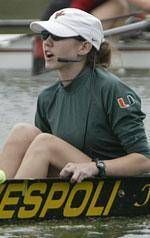 CORAL GABLES, Fla. – The University of Miami rowing team will host Cincinnati in the final dual race of the season Saturday, May 1 at the waters of Indian Creek in Miami Beach, Fla.

The Hurricanes had an impressive day in their last outing, taking second place at the 2004 BIG EAST Challenge April 25. Miami finished second overall, ahead of three-time defending champions Syracuse, and marked the school’s highest finish in school history.

“We are coming off some incredible performances from all of our crews last weekend at the Big East Championships so we look to continue that momentum this coming weekend against Cincinnati,” head coach Debra Morgan said.

This will also mark the last of UM’s dual races this season. Miami’s last dual race came against future ACC rival Clemson March 21. Against the Tigers, Miami was able to split to come away with wins in three of six races.

“This is the part of the season where you really want the crews to find their peak speed and hold it through to the end of the season,” Morgan said. “We’re right on course to have our fastest races of the year at the Central Sprints in three weeks. Our race against Cincinnati keeps us racing and hungry and focused on our goals for Centrals.”

Saturday’s races are slated to begin at 8 a.m. with the varsity four. Admission is free.