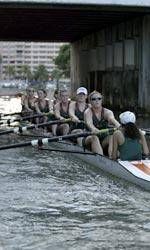 Miami had finished sixth in each of the three previous BIG EAST Rowing Challenges dating back to the 2001 season.

“We had a phenomenal day with some really good racing,” Morgan said. “We haven’t beaten teams like Rutgers and Boston College in the three seasons I’ve been here, and even a couple of years prior to that so for us to come out and finish second overall today was a major accomplishment.”

“Syracuse is one of the best teams in the nation, so for our varsity eight us to finish just a little over a second behind them speaks volumes for our team,” Morgan said.

“Our junior varsity eight beat a good Syracuse team and I was very proud of what our varsity four and novice eight were able to accomplish today,” Morgan said.

The Hurricanes will return to action May 1 in their final dual race of the season, hosting Cincinnati at Miami Beach before heading to the Central Sprints May 15-16 in Oak Ridge, Tenn.