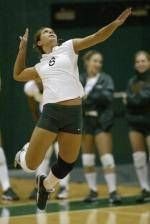 Virginia Tech (13-14, 7-5 BIG EAST) took a 5-4 lead in the first game on a kill by the Hokies Melissa Markowski. UM responded, taking the lead, 7-6 on a service ace by VT’s Katie Esbrook and never fell behind for the remainder of the three-game match. Miami would take the first game, 30-25 on an attack error by the Hokies.

UM opened the second slate with five consecutive service points by junior outside hitter Elizabeth Tyson (Jacksonville, Fla.). The Hokies tied the game at 14 until redshirt freshman Francheska Savage (Ft. Myers, Fla.) powered a shot into the center of VT court on an assist by freshman setter Jill Robinson (Merced, Calif.). The Hurricanes would lead by as much as seven points at 24-17 before eventually downing VT, 30-28 in the second game.

Miami would continue to roll in the third game, taking the match on a kill by Robinson to win the game, 30-21 and securing their spot in the BIG EAST Championships.

Santaella Sante finished the match with five digs and three service aces to go along with her team-high 13 kills. Sophomore middle blocker Karla Johnson (Houston, Texas) lead the Hurricanes with a match-high .647 hitting percentage, turning in 12 kills on 17 attempts and added three blocks. Sophomore Robin Lewullis (Allentown, Pa.) also posted 12 kills for UM in just her second match at the left side.

“I think we were pretty steady tonight,” Head Coach Nicole Lantagne Welch said. “We had a great offensive performance out of Leyre, Robin and Karla. We had three players who were on fire and when you have that many people putting up those kind of numbers, you are in a good position.”

“We secured our spot,” Lantagne Welch said. “We will probably play Notre Dame or Pittsburgh. Both of those teams got us earlier this year and we will be coming in as an underdog and we are excited about being in that position.”

For the second time in as many years, the Hurricanes will compete in the BIG EAST Championship Tournament. UM will travel to South Bend, Ind. to play in the opening round on Saturday, Nov. 22, playing as the No. 3 seed. Notre Dame and Pittsburgh have already clinched spots in the tournament. The two schools are slated to face one another on Sunday, Nov. 16 in a match that will determine who will earn the No. 1 and No. 2 seeds.