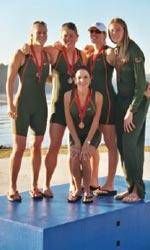 CORAL GABLES, Fla. – The University of Miami rowing team earned 770 total points to take first place at the 2003 Head of the Chattahoochee Regatta at Lake Lanier in Atlanta, Ga. On Nov. 1-2.

“This weekend was a great pay off for the athletes and the coaches,” Head Coach Debra Morgan said. “We have been riding on faith for a while now, knowing we needed to put in a lot of hard work at practice before we would see the better race results. Hopefully this weekend will only be the start of a rise in the national rankings.”

The Hurricanes finished 125 points ahead of second-place Duke, who earned 645 points at the Head of the Chattahoochee. Clemson finished third with 590 points.

“Versatility was the name of the game,” Assistant Coach Cinda Ewton said. “The athletes really stepped up to the challenge of racing in both sweep and sculling events and performed well in new line ups.”

“We had the race we were capable of,” said coxswain Jessica Martin. “Not only did we want to beat our time from last year, we wanted to win. At the starting line I told them how last year we took more than 20 minutes so this year we wanted to break 19. Sarah added that we should break 18 minutes, and we did exactly that.”

“All-in-all, this weekend has been filled with many surprises, most of which were fantastic,” said freshman Sarah Conlon. “I believe that every person that came on this trip learnt some very valuable lessons, and if not we at least grew a lot closer as a group. It was a great time to bond and get to trust each member of the team little bit more.”

Miami placed second in the Women’s Varsity 4+ with a time of 19:42.3 behind Clemson and just ahead of Texas, a team that competed at the 2002 NCAA Championships. The UM Varsity 4+ team consisted of coxswain Laura Comeau (So.), rowers Ashley Marinscin (So.), Jenny Krawec (Sr.), Aoife Forde (So.) and Jordanna Heywood (Sr.).

“The second place finish in the Varsity 4+ event is probably the most exciting finish for us,” Morgan said. “This is the first time we have beaten Duke and Texas at the varsity level. Until you beat a school like Texas they seem a bit untouchable. But once you beat them, the confidence level of our athletes increases and they start seeing themselves and their abilities in a whole new light. It doesn’t mean its going to get any easier to beat Texas. It just means our crew knows its possible now.”

“I think the high light of my weekend was coming down that course in the varsity 4+ and totally rocking,” sophomore Aoife Forde said. “The boat was just flying from the minute we entered the starting chute until the very end. The most amazing thing was just thinking that my heroes rowed here. It gave me goose bumps just to stand and look down at the course and picture Steve Redgrave (a former Olympian) rowing one of his toughest races and winning an Olympic gold medal. I think that is what gave me the drive to push harder.” Forde comes to UM from Galway, Ireland and rowed in the two seat of Varsity 4+ as well as the Varsity 8+.

“We obviously had a great regatta,” Morgan said. “Now the trick is to build on our speed for the spring.”

Miami will return to the water on Saturday, Nov. 8 to participate in the Florida Fall Regatta in Melbourne, Fla.