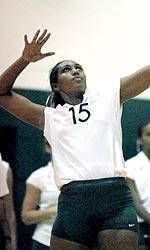 UM jumped out to an early lead in the first game and never held back, taking WVU 30-23. Miami would continue to roll in the second game, out hitting West Virginia .333 to -.022 to win the second frame, 30-17. The Hurricanes would seal the victory downing WVU 30-24 in the third set.

Johnson turned in eight kills to go along with her seven blocks, while Tyson lead all players with a match-high 13 kills and a .385 hitting percentage while adding nine digs. Freshman setter Jill Robinson (Merced, Calif.) led UM with 39 assists and senior outside hitter Leyre Santaella Sante (San Juan, Puerto Rico) had 12 kills and tied a career-best with nine digs in the Hurricanes’ win.

Miami will return to the court on Sunday, Nov. 2, hosting BIG EAST leader Pittsburgh at 2 p.m.