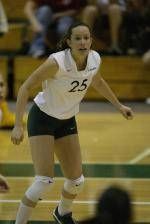 “It was an outstanding team effort today,” Head Coach Nicole Lantagne Welch said. “We hit over 400 as a team, which is really amazing.”

Miami senior outside hitter Leyre Santaella Sante led all players with a match-high 15 kills for a .417 hitting percentage and junior Elizabeth Tyson turned in 13 digs for the Hurricanes for a .500 hitting percentage. Red shirt freshman Francheska Savage had one of her best performances of the season with seven kills on eight attempts for a career-high .875 hitting percentage to go along with two total blocks.

“I was really impressed with Elizabeth Tyson’s performance today,” Lantagne Welch said. “She was very aggressive attacking the ball. It was great to see both of our middle’s – Frannie Savage and Karla Johnson – play well. Jamie Grass also had a great match for us.”

The Hurricanes extended their current win streak to seven matches and remain perfect at home against BIG EAST opponents.

Miami will return to action on Tuesday, taking on in-state rival South Florida at 7:00 p.m. in Tampa, Fla.