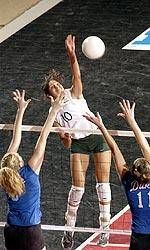 The Hurricanes jumped out to an early lead with a 6-1 run on the Colonels to open the match in game one. EKU battled back to cut the lead to one at 14-13 before the Hurricanes went on 5-0 run to break open the lead 18-13. Miami would go on to down EKU in the first game, 30-27.

The Colonels would prove to be too much for UM in the second game, overtaking the Hurricanes, 30-19 to tie up the match at one game apiece.

The third game saw UM lose an eight-point lead when EKU would take the lead 26-25. The game would go back and fourth until the Colonels took the game, 30-27 and take a 2-1 lead in the match heading into the fourth game.

The fourth game would pick up where the third game left off, with neither team leading by more than two points until EKU went up 20-17. Miami would cut the lead back down to one after two consecutive kills by Elizabeth Tyson. UM would edge out Eastern Kentucky, 30-28 on a game-winning kill by Tyson and send the match to the fifth game.

With the fifth game tied at 3-3, the Hurricanes reeled off four straight points to lead 7-3. EKU would then cut the lead to one at 7-6 with a three-point surge. The two schools would trade points until Tyson clinched the game, 20-18 and the match with her 15th kill of the night.

Six Hurricanes recorded double digit kills in the win and three players had double-doubles in kills and digs. Junior outside hitter Valeria Tipiana led all Hurricanes with 23 kills and junior Jamie Grass led Miami with 16 digs. Freshman Jill Robinson turned in her fourth 40 plus assists performance of the season with 46.

The Hurricanes will return to action on Friday afternoon to face in-state rival Florida State at 8 p.m. Miami’s match with FSU will be televised live on the Sunshine Network.