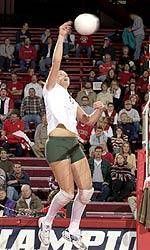 CORAL GABLES, Fla. (hurricanesports.com) – The University of Miami volleyball team fell to Northwestern, 3-1 on Friday night at the Orange and Green Challenge at the Knight Sports Complex.

The Hurricanes fell to 7-3 on the season. The loss to the Wildcats (6-2) marked the first loss at home for Miami in 10 consecutive games dating back to the 2002 season.

“We played a great first game and started out good in game two,” Head Coach Nicole Lantagne Welch said. “Northwestern really picked up the pace like we had seen that in their previous matches and we didn’t respond. We got a little tentative, our passing broke down and we and we let them back in the game. We fought near the end of the game, but it was too little too late.”

Northwestern out hit the Hurricanes .354 to .242 led by Iwona Lodzik who posted 23 kills to go along with Drew Robertson’s 64 assist.

The Hurricanes were led by junior outside hitter Valeria Tipiana who collected 15 kills and nine digs, barely missing a double double. Sophomore Robin Lewullis was second in kills for UM with 14 on the night. True freshman Jill Robinson missed her third straight match with at least 40 assist by one with 39.

Miami will return to action on Friday, Sept. 19 at the Florida State Tournament in Tallahassee, Fla. facing Eastern Kentucky at 2 p.m.