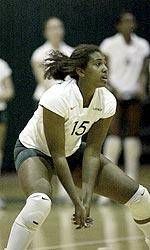 The win over GMU (3-5) gave the Hurricanes (6-2) their ninth consecutive victory at home, dating back to the 2002 season and earned Head Coach Nicole Lantagne Welch her 50th career win in three seasons at Miami.

“This was a great win for us, especially to win in three games,” Coach Lantagne Welch said. “They are an excellent team. They have an excellent player who hits the ball very hard. We played well, but we didn’t play our best. A lot of people contributed to this win.”

Miami jumped out to an early led in the first game before GMU bounced back and held the lead by as much as four points. The Hurricanes rallied to tie the score at 25 before edging out George Mason, 31-29. The second game would follow suit as UM and the Patriots traded off points with Miami escaping to win, 30-28. As the previous two games went, GMU and Miami squared off with neither team falling more than three points behind. The Hurricanes took the game and the match, scoring four consecutive points to win, 30-27.

The Hurricanes had an overall team effort in the win, with four players posting double figures in kills, led by junior outside hitter Valeria Tipiana who posted a team high 13 kills. Tipiana also recorded a double double, collecting 10 digs.

Junior outside hitter Ashley Youngs turned a season high 11 digs to go along with two assists. Newcomer Jill Robinson had a breakout game against the Patriots, posting a season team high 48 assist in the three games from the setter position.

The Hurricanes were strong up the middle with sophomore’s Karla Johnson and Robin Lewullis combining for 19 kills, four solo blocks and six blocking assists.

George Mason’s Aline Pereira had a match-high 21 kills on 49 attempts followed by Milena Racic who totaled 14 kills for the Patriots. Racic also led both teams with 15 digs, posting a double double on the night.

The Hurricanes will return to action on Friday taking on Columbia at 10 a.m. and Northwestern at 7 p.m. The afternoon slate with Northwestern will be broadcast live on WVUM 90.5 FM along with streaming audio live on the web.