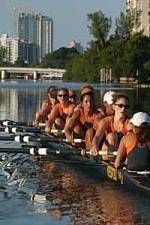 The University of Miami is moving into its third year of competition under Head Coach Debra Morgan, coming off improved performances in 2002-03. The team is ready take the next step to becoming a nationally ranked rowing program and is expected to make a big jump in 2003-04. With the loss of only two seniors, the return of a successful freshman crew and a talented group of incoming freshmen, the future looks bright.

Highlights from spring 2003 varsity racing included a 6th place finish at the BIG EAST Championship and a 12th place finish at the Central South Regional Championships in the first varsity eight. The crew placed 6th overall in the NCAA South region. Hurricane MVP Jenny Krawec earned a position on the NCAA All South 1st team and was named as a 2nd team CRCA All-American. Members of the 4th place BIG EAST Championship second varsity eight competed in the varsity four event at the Central South Regional Championships and also placed 12th.

Miami’s freshman eight finished the season with a winning record, remaining undefeated on home waters as well as taking the Florida State Championship for the first time since 1999. They went on to end the drought of BIG EAST medals, earning the bronze behind Syracuse University and Rutgers University. The crew finished their season placing 12th at the Central/South Regional Championships, which is becoming the most competitive race outside of the NCAA championships.

Senior co-captain Margaret Knuth looks back fondly on her Miami experience. “I’ve really enjoyed rowing at Miami every year I have been here, but this last year was different. Faster boats along with competitive and determined teammates gave me no other choice but to love Miami rowing. Though I’ll miss it, I’m excited to see the new heights the program is soon to reach.” Knuth and fellow senior Dorothy Clay are the only losses the Hurricanes will experience in the year 2003-04. In their place is a talented group of incoming freshmen that will certainly add to program depth and speed.

Four Canadians will be joining the Hurricanes in the fall. Karen Wiley (St. Catharines, Ontario) earned the title of 2003 Senior Women’s Pair Schoolboy National Champion. Argonaut Rowing Club member Laura Coltman (Toronto, Ontario) will join the group after finishing 4th out of nearly two hundred competitors at the 2003 Ontario Erg Championship. Victoria City Rowing Club members Natasha Lejer (Victoria, British Columbia) and Valerie Webb (Brentwood Bay, British Columbia) will be making the big jump from Vancouver Island. Lejer is competing for a spot on the 2003 Canadian Junior National Team. Webb took a season off after suffering an unlucky accident. She will be back in form and brings with her many years of competitive swimming as well as a gold medal from the 2001 Canadian Schoolboy National Championships in the women’s Jr. 4+.

If Canada was not far enough away, the Hurricanes have reached out to recruit in the land Down Under and will bring in Sarah Conlon (Melbourne, Australia). Conlon stroked her Youth Quadruple Scull to victory at the 2002 Australian National Championships.

Americans still make up the majority of the team, and this year’s group stretches far and wide. Experienced sculler Ashley Via (Philadelphia, Pennsylvania) finished her high school career off with a bronze medal in the Senior Women’s Quadruple Scull at the 2003 Scholastic Rowing Association’s National Championship. Newer to rowing and touted as a sleeper is Alicia Alamar (Ann Arbor, Michigan). Team captains and sweepers Molly Wilson (Oconomowac, Wisconsin) and Marenda Chamberlin (Lake Oswego, Oregon) round out the incoming class of rowers. Chamberlin was a grand finalist at the 2003 San Diego Crew Classic while Wilson was a semifinalist at the 2002 Women’s Henley Regatta. To navigate the waterways will be two coxswains who have verified their admission to the University of Miami. Meghan Leydecker (Orchard Park, New York) will join the group along with Hannah Bae (Alexandria, Virginia). Both Leydecker and Bae have four years of experience in the coxswain seat, with Leydecker knowledgeable of Miami’s waterways from her spring break training days with Nardin Academy.

For more information on University of Miami athletics log on to hurricanesport.com, the official site for all Hurricane news, tickets and apparel. For Hurricane ticket information call 1-800-GO CANES.