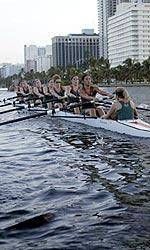 “The athletes are really excited for this regatta,” coach Debra Morgan said. “Everyone is healthy, morale is high, and practices have been very productive. This is the race we’ve been training for all year. We’re ready.”

Morgan is very optimistic about all of her squads, but noted that the novice eight has been particularly solid.

“Our novice eight is probably the fastest novice eight UM has ever fielded in its 16-year history,” the coach said. “The athletes in the crew are definitely enjoying their first year of collegiate racing and are looking forward to making an impact in the varsity program next year.”

She also noted that the varsity eight are racing extremely well.

“The (varsity eight) are looking to perform their best races of the season this weekend,” Morgan said. “Physically and mentally, they are in a good position to do so.”

Results from the competition will be posted Sunday evening on www.hurricanesports.com.