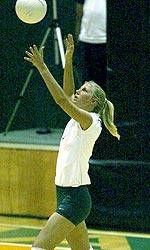 CORAL GABLES, Fla. (www.hurricanesports.com) – – The University of Miami volleyball team finished last season ranked 23rd in the nation and if Saturday’s scrimmage tournament in the Knight Sports Complex is any indicator, the Hurricanes aren’t likely to fall much further once fall rolls around.

Playing against teams from throughout South Florida, UM won each game it played.

For coach Nicole Lantagne Welch, the home tournament, as well as recent similar competitions at Florida and South Florida, the spring has been a good opportunity to experiment with the team in an effort to find places for improvement.

“The spring is a good time to get a lot of people out on the floor and to try and so some different things,” Lantagne Welch said. “We had more people jump serving…that type of thing. (We) experimented with a few things that you don’t necessarily do in the fall.”

The coach noted that the team’s middle blockers (Karla Johnson and Robin Lewullis as well as redshirt freshman Francheska Savage) had made considerable improvement on offense.

“Our middle attack has gotten a lot better and I think that will be a much bigger part of our offense this year especially because we had freshmen in there and now they will have a whole year under their belts,” she said. Both Johnson and Lewullis will be sophomores and Savage will be coming off her redshirt year.

The Hurricanes’ only real concern over the spring has been finding a replacement for departed outside hitter Marcela Gamarra, a First Team All-BIG EAST and an AVCA First Team All-Northeast Region selection.

Outside hitter Ashley Youngs, a reserve in 2002 and the Hurricanes’ first option off the bench, appeared to have taken huge strides toward becoming Gamarra’s replacement.

“Ashley has had a great spring and it started with her practices,” Lantagne Welch said. “She came in in the spring ready to go. She’s coaching some club and I think her experience with that is helping in her game as well.

“I think she’s grown with confidence in each match,” the coach elaborated. “She used the spring to get her teammates to believe in her. She knew that she could do that and now she’s out there. She has the confidence now to go out there and swing hard. She’s an aggressive feisty player and she brings a lot to the court.”