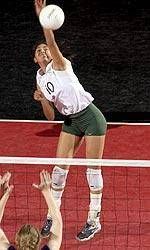 CORAL GABLES, Fla. (www.hurricanesports.com) – – The University of Miami volleyball team will be competing in a number of tournament throughout Florida this spring including those hosted by South Florida, the University of Florida, and one on the Coral Gables campus.

Saturday, March 22, the Hurricanes will travel to Florida and compete against teams from throughout the country. UM will play host Florida at 9 a.m.; Wisconsin at 10:15 a.m.; and Louisville at 1:15 p.m. All matches will be held in the Lemerand Center.