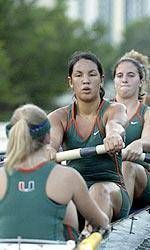 The UM and Navy Varsity and JV 8’s scrimmaged together performing a total of five competitions Thursday at Indian Creek in Miami Beach with the Hurricanes’ varsity unit winning each scrimmage.

“I was excited and pleased with the athletes’ performances today,” said coach Debra Morgan. “Last year at this time, Navy was beating us so today’s outcome is extremely encouraging.”

The Hurricanes race again on Sunday, March 16 when they go head-to-head with Yale in Sarasota, Fla..

Log on to hurricanesports.com for information on the University of Miami’s rowing program, coaches and student-athletes.