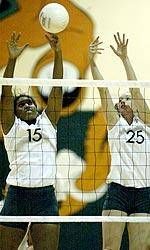 Hurricanes Look To Storm Through Pittsburgh

CORAL GABLES, Fla. (www.hurricanesports.com) – – The University of Miami volleyball team will take on yet another BIG EAST contender Friday when it travels to face the University of Pittsburgh.

The Hurricanes will be attempting to improve their chances to pick up a return ticket to the Steel City as it will host the BIG EAST Conference Tournament this year.

The Panthers (6-4 in conference, 16-9 overall) have been a solid BIG EAST volleyball team for a number of years and will be a stiff challenge for a Miami team looking to get a foothold in the conference tournament.

The Hurricanes are coming off of an important win over UConn Sunday in the Knight Sports Complex and are tied with Virginia Tech for second place in the conference at 7-2.

UM is led by its outstanding senior middle hitter Marcela Gamarra (Medellin, Colombia), who was the BIG EAST Player of the Week for Nov. 4. Gamarra has been the Hurricanes’ top all-around player for much of the season. Going into Friday’s match, she was leading the team in kills with 4.34 per game and was second on the team in digs with 3.22 per game.

Around Gamarra are a number of solid contributors including the team’s most efficient hitter, Valeria Tipiana (Lima, Peru), who boasts a .354 attack percentage and is second on the team in kills with 4.01 per game. Sophomore setter Mallorey James (Tucson, Ariz.) has begun to come into her own and has 13.67 assists per game.

Freshmen Middle blockers Karla Johnson (Houston, Texas) and Robin Lewullis (Allentown, Penn.) have been a force for the Hurricanes inside, combining for a total of 1.2 blocks per game.

After facing Pitt, the Hurricanes will travel to Morgantown, W. Va., to play the West Virginia Mountaineers on Sunday at 2 p.m.