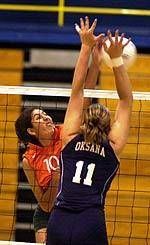 With the victory, the Hurricanes improved their nation-leading win streak to 25 matches and remained undefeated on the season.

The Hurricanes were virtually unstoppable in the match, denying the hosts even a single block and relegating the Friars to a .010 hitting percentage. Coach Nicole Lantagne Welch said that she was pleased with the workmanlike manner in which her team dispatched Providence. “It’s good to see us going in and taking immediate control,” the coach said.

“We played well and we got great play out of our freshmen,” Lantagne Welch said. “It was a total team effort and we played at the best of our ability.”

On the heels of an 11 total blocks performance against Boston College, Robin Lewullis (Allentown, Penn./Allentown Central Catholic HS) led at the net with 9 total blocks.

The Friars were led by Ayana Cadres, who had 13 kills.

Miami’s next contest is Oct. 5 at Villanova followed by another match on the road at Georgetown. The team’s next home match is Friday, Oct. 11 when it will host Rutgers at 7 p.m. in the Knight Sports Complex.