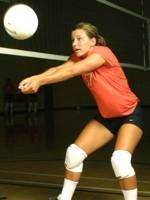 CORAL GABLES, Fla. (www.hurricanesports.com) – – When defending national champion Stanford yielded its first loss of the season to Florida Saturday, the University of Miami volleyball team assumed a unique status as having the longest current win streak in the nation.

Last season, on October 5, the Hurricanes surrendered their last loss since the program was restored, falling 3-2 to Florida International. Since then, UM has accumulated 21 straight wins going into its second season.

Among the Hurricanes’ laurels are victories over two of their key rivals. Last weekend, Miami withstood a two-game deficit to defeat Florida State 3-2 in the Florida International Fall Volleyball Classic. The following evening UM swept host FIU 3-0 to claim the tournament title. Both the Seminoles and the Golden Panthers claimed wins over Miami’s team in its inaugural season.

Other quality opponents that have fallen prey to Miami are Georgia (3-1 in the Wichita State Tournament) and Oregon (3-0 in 2002 Hurricane Invitational).

“I would say that I’m pleasantly surprised that we’re playing at the level we are this early in the season,” said coach Nicole Lantagne Welch.

The only other NCAA Division 1 volleyball teams with at least 10 wins and no losses are Eastern Washington (11-0) of the Big Sky Conference and the Atlantic Coast Conference’s Maryland (10-0).

The Hurricanes are one of just 11 Division 1 teams in the United States that remain undefeated.

One of the common elements among UM’s players is athleticism, a quality that Lantagne Welch says she stresses when identifying talent at the prep level.

“The biggest thing that I look for is athleticism,” she said. “We definitely want to have the best athletes on the court. Those kinds of athletes can cover the court and play great defense. They also can jump and attack at the net, but I really think that athleticism is one of the first things that I look for in a player.”

Defensively, Miami is second among BIG EAST teams in average digs per game with 577 in 35 games (16.49 per game). Sophomore libero player Jamie Grass is third in the BIG EAST in digs with 4.11.

The Hurricanes also have the most assists in the BIG EAST Conference with 519 (14.83 per game).

On offense, Miami is the leader among BIG EAST Conference teams with 591 kills (16.89 per game) and is second behind Notre Dame in hitting percentage (.255).

Senior outside hitter Marcela Gamarra leads the BIG EAST in kills with 4.43 per game (155 overall).

Gamarra is the only senior on a roster that is dominated by freshmen and sophomores just beginning to come into their own.

Freshmen middle blockers Karla Johnson and Robin Lewullis are both among the top 10 in the BIG EAST in blocks.

“I think I really lucked out my first year getting a few kids that wanted to just come in and play right away,” Lantagne Welch said. “(They) were really excited about coming in and starting a program and being a part of history. That kind of stuff helped for the next class. Miami has a lot to offer. It’s a great educational institution and has big-time college athletics.”

The Hurricanes’ next match is Friday at 7 p.m. when they host Florida Atlantic in the Knight Sports Complex on the Coral Gables Campus.

Those seeking ticket information regarding volleyball or any other athletics event offered through the University of Miami may call 1-800-GO-CANES.