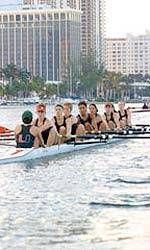 The Spartans were able to get the best of the varsity women’s eight and second eight by winning all four pieces (races) ran. In the varsity fours, the Hurricanes’ one of its pieces against Michigan State. The novice eights did one six-minute piece and two four-minute pieces, tying in the six and with UM falling to MSU in both four-minute pieces.

The Hurricanes women’s novice crew, which had only one eight competing, defeated three boats from Boston College in its piece.