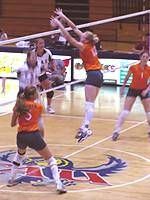 Boca Raton, Fla. – (www.hurricanesports.com) – Florida Atlantic defeatedthe Miami volleyball team 3-0 (30-25, 31-29 & 30-25) on Tuesday evening at FloridaAtlantic Gymnasium in Boca Raton. With the win, the Owls picked up their firstvictory of the season to move to 1-6.

Florida Atlantic went on to win 30-25 in the third game to take the match.

FAU’s Gracie Heim led all scorers with 20 kills on 37 attempts to post an impressive.432 kill percentage.

Miami returns home for a match against the Jacksonville Dolphins on Friday, September21 at 7 p.m. All Hurricane home matches are played at the Knight Sports Complexon the UM campus.