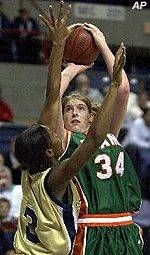 Hurricanes Fall To No. 6 Irish

STORRS, Conn. (AP) – Ruth Riley expected a crowd, and got it.

The Notre Dame center fought through double and triple teams Sunday and cameup with 18 points and 14 rebounds as the sixth-ranked Irish beat Miami 67-52 inthe quarterfinals of the Big East tournament.

“When they double- and triple-team you, there’s got to be other peopleopen,” said Riley. “You just hope to hit them.”

She was the biggest target all night for her teammates and scored eightpoints in the final 12 minutes to seal the win.

“Ruth Riley is probably the best center in the nation,” said Miami coachFern Labati, whose team had few answers for the 6-foot-5 junior.

Notre Dame (25-3) will play either No. 8 Rutgers or Villanova in thesemifinals.

The Irish, playing for the first time since losing to top-ranked Connecticutlast Saturday, struggled early with 14 first-half turnovers and 37 percentshooting from the floor.

Dalia Clarke and Alicia Hartlaub combined for the first nine Hurricanepoints and 9-8 lead in the first seven minutes. With 13:05 left in the firsthalf, Niele Ivey’s 3-pointer kicked off an 11-4 Irish run to put Notre Dame up19-13.

Danielle Green gave the Irish some breathing room, scoring five points in a7-2 run to open the second half with a 39-27 lead.

Clarke kept the seventh-seeded Canes close with nine points in the firstseven minutes of the second half. Her jumper with 12:48 left cut the Irish leadto 44-39, but the Canes would get no closer than five the rest of the way.

Riley converted a three-point play and the second-seeded Irish hit 7 of 12from the foul line to seal the win. Ivey had 13 points for Notre Dame.

Clarke led Miami with 16 and Sheila James had 14 for the Hurricanes.

“We wanted to come out and play hard,” James said. “We knew we were theunderdog. We played like it was our last game.”