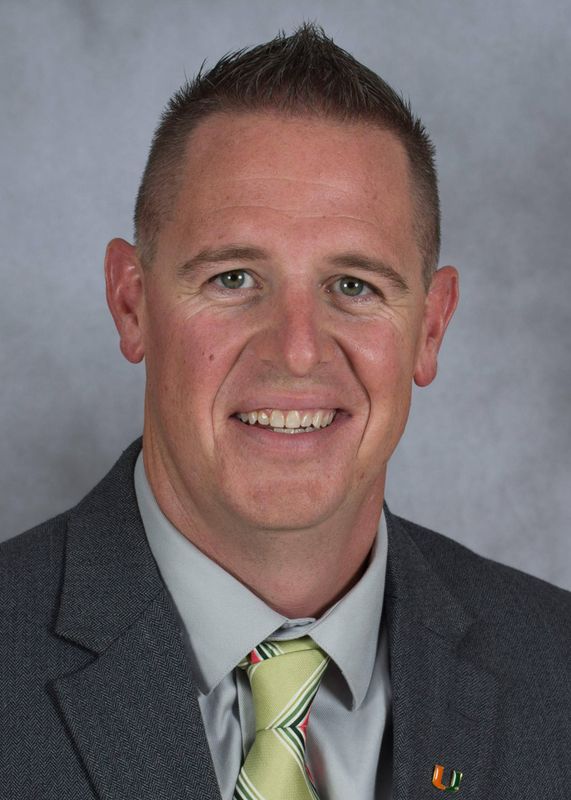 Cory Young coaches throws at the University of Miami, joining the program in the fall of 2012.

Gian Piero Ragonesi concluded his final season with the Canes after reaching the NCAA Championships and finished 20th overall in the discus earning honorable mention in the event. At the ACC Outdoor Championships, Ragonessi was an All-ACC First Team honoree in both the shot put and the discus and won the bronze medal in both events. Like the outdoor season, he won bronze in shot put at the 2018 Indoor ACC Championships earning another First Team All-ACC honor. Ragonessi’s time at UM left his name in the Top 5 marks in the outdoor shot put, discus and hammer throw.

Fellow freshman Debbie Ajagbe also made her way to Eugene and finished 16thoverall in the women’s discus. Ajagbe made it to the NCAA East Preliminary in the shot put, discus, and hammer throw after earning the bronze medal in the shot put at the ACC Championships. Her performance in the shot put earned her All-ACC first team honors and second-team honors in both the women’s hammer and shot put.

Zakiya Rashid finished her junior season with the Canes reaching the NCAA East Preliminary finshing 22ndoverall in the discus, where she garnered All-ACC Second Team honors.

Under Young’s guidance, Miami had another stellar season in the throws. The Hurricanes had six regional qualifiers: Precious Ogunleye, Lea Johnson and Tiffany Okieme on the women’s side and Carlos Mangum, Gian Piero Ragonesi and Daniel Polinski on the men’s side. Ogunleye advanced to the NCAA Championships in the hammer throw.

All three Hurricane women scored at the ACC Outdoor Championships, with Ogunleye earning the ACC Championship in the women’s hammer. The junior earned First Team All-ACC honors in the hammer and second team honors in the discus. Okieme and Johnson were Second Team All-ACC in the women’s hammer, placing fourth and fifth, respectively. The duo were also national qualifiers in the weight throw, with Johnson earning First Team All-America honors and Okieme being named to the second team.

The 2014 season was strong for Young’s throwers. Lea Johnson and Amber Monroe qualified for the NCAA Outdoor Championships, while Isaiah Simmons and Gian Piero Ragonesi earned spots in the NCAA East Preliminary.

Johnson earned All-America, second team honors after placing 16th in the women’s hammer throw at the NCAA Outdoor Championships. An All-ACC selection during both the indoor and outdoor seasons, Johnson claimed the ACC title in both the weight throw and hammer throw. She was also a second team All-America indoors after finishing fifth in the weight throw at the NCAA Indoor Championships.

On the men’s side, Simmons headlined a talented trio of throwers. he claimed the ACC title in the shot put in both the indoor and outdoor seasons for the second consecutive year and was named the Field MVP at the ACC Outdoor Championships for the second straight season. He also improved on his school record marks in the shot put (18.87m indoor, 18.91m outdoor), discus (56.68m) and weight throw (17.91m).

Ragonesi was one of two freshmen to make a significant impact in his first year working with Young. An All-ACC selection after finishing third in the shot put at the ACC Indoor Championships, Ragonesi ranks second in school history in the indoor shot put and discus, while claiming the third-best outdoor shot put, hammer throw and weight throw marks in UM history.

Carlos Mangum also flourished as a freshman at Miami, setting the UM record in the hammer with a throw of 61.11m at the LSU Invitational. Mangum placed fourth at the ACC Outdoor Championships in the hammer throw and ranks second in UM history in the weight throw.

In 2014, Young also had the opportunity to work with some of the top junior throwers in the country. As a member of the USA Track & Field coaching staff, Young helped prepare the United States’ best junior throwers for the IAAF World Junior Championships.

In his first season at Miami, the Hurricane throwers flourished under Young’s guidance with Isaiah Simmons, Lea Johnson and Amber Monroe all qualifying for the 2013 NCAA East Preliminary.

On the women’s side, Johnson climbed the Miami record books in her sophomore season peaking at No. 3 in school history in women’s hammer with a throw of 56.54m. She also set a personal best in the weight throw at the ACC Indoor Championships with a mark of 18.85m.

Monroe also shined in her first season working with Young, earning three wins in women’s discus and one in women’s shot put. She also set indoor personal-bests in the shot put (13.58m) and weight throw (15.77m).

Young joined the staff after spending 2011-12 at the University of Kentucky and will serve as the throws coach at UM. With the Wildcats, he coached two athletes to All-America status at the 2012 NCAA Outdoor Track & Field Championships and guided the SEC discus champion and school-record javelin thrower.

Prior to his tenure at UK, Young sereved as the throws coach at Grand Valley State. Under Young, Grand Valley State won the 2011 NCAA Division II National Indoor Track & Field Championships. During his tenure with GVSU, the team made an impact at the national level, totaling 33 All-America honors and four national champions.

During the 2010 indoor campaign at GVSU, school records were set in the women’s weight throw and men’s and women’s shot put. During the 2010 outdoor campaign, Lakers throwers continued to excel with nine throwers advancing to the NCAA Division II Outdoor National Championships and three student-athletes earning All-America status.

While at Western State, Young also managed and coordinated events at the school’s conference center. Some of Young’s other duties included creating and implementing workouts for the throwers, consulting with other events coaches with their workouts, and teaching weight training courses in the spring.

Young graduated from the University of Indianapolis in 2005 with a bachelor’s degree in computer information systems. As an athlete, Young was a two-time All-American in the weight throw and was also a two-time outdoor national qualifier in the hammer and discus.