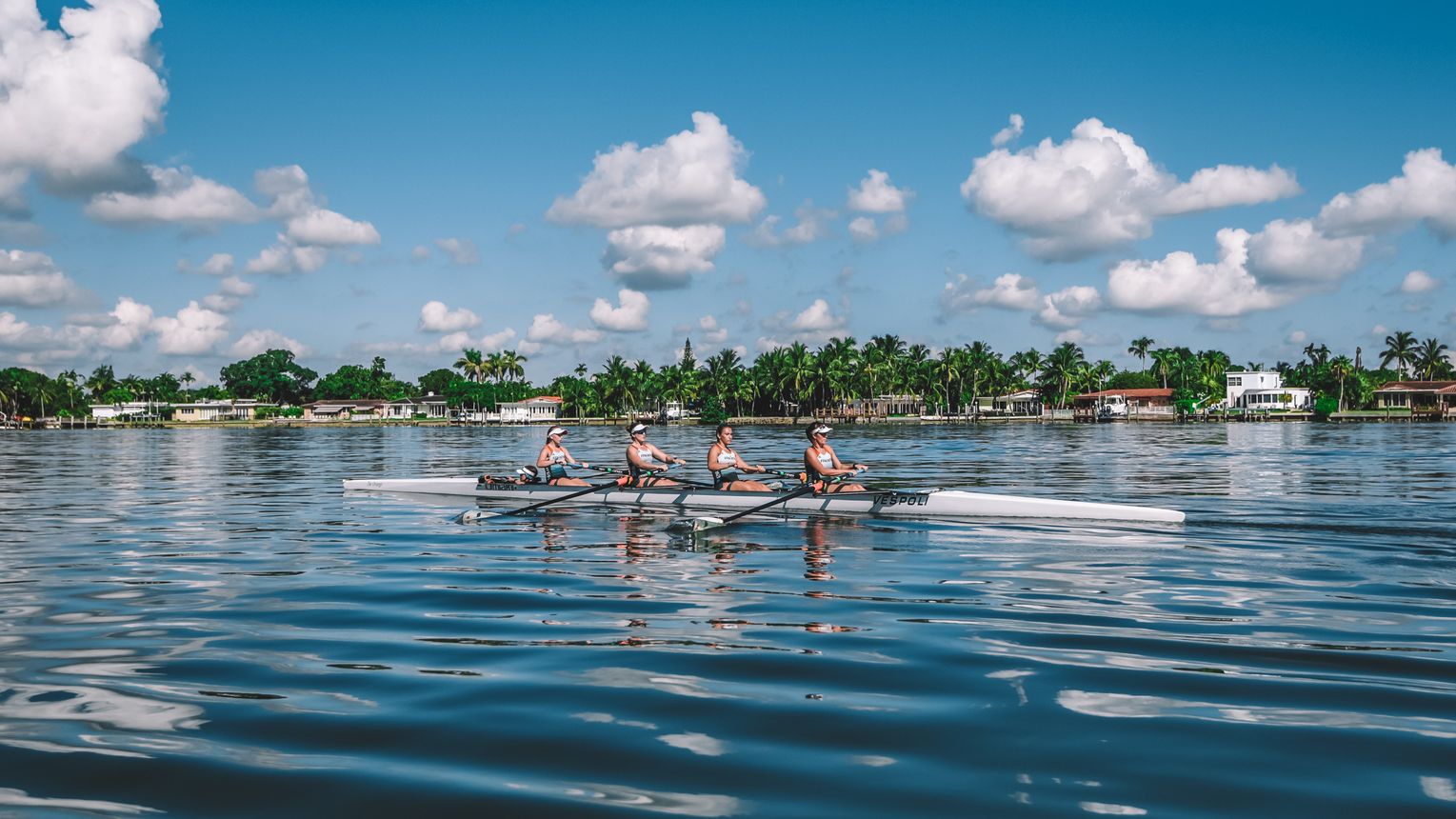 From the Ground Up (1986-2001)
The University of Miami established a rowing club composed of men’s and women’s rowing teams in 1986, tabbing Joe “Okie” O’Connor as the head coach. O’Connor pioneered the UM rowing team, building the club with no scholarships and a limited budget. While the club was not a part of the NCAA until 1996, Miami recognized rowing as a varsity sport from the inception.

Winning Ways
The Canes quickly rose to national prominence over the next few years, especially in the novice and junior categories. The novice eight took home the national title at the 1987 David Vail National Rowing Championships, while the junior varsity eight won the bronze at the same event in 1989.

The Canes continued their winning ways in the early 1990s, posting a varsity eight win at the Florida Intercollegiate Rowing Championships and the Head of the Chattahoochee in 1991. Miami followed up with a varsity eight bronze medal at the 1992 David Vail National Championship.

Home Sweet Home
In October 1993, the Ronald W. Shane Watersports Center became the home of the UM rowing program. The Shane Center, located on the east bank of the Indian Creek, is in the heart of scenic Miami Beach. It is a 4,200 square-foot boathouse, equipped with a fully functional indoor and outdoor boat bay that can house more than 75 shells.

On the inside, the Center holds two spacious locker rooms with shower facilities, coaches’ offices, a weight room with ergometers and a media/lounge room that can be used for film study or to hold social occasions. On the outside, the Center has a state-of-the art 100-foot floating dock large enough to launch four eights at one time.

Welcome to the Big Leagues
In 1996, the NCAA and the University of Miami officially recognized rowing as a varsity sport.

Aisha Chow
A member of the rowing team from 1995-99, Aisha Chow arrived at Miami on an academic scholarship before trying out rowing as a novice. She quickly found success and was thrust into the top varsity boat as a strong, but inexperienced freshman.

In her time at Miami, Chow helped the Hurricanes excel at notable regattas, including Head of the Hooch. As a junior, Chow was part of the Hurricanes’ varsity eight that won a title at the Southern Intercollegiate Rowing Association championship in 1997-98. She excelled off the water as well, being named to US Rowing’s 1999 Collegiate Honor Roll First Team.

A New Era (2001-2007)
In August of 2001, Miami tabbed Debra Morgan as the second head coach in program history. Her impact on the team was quickly made apparent in wins at the Florida Intercollegiate Rowing Championship, in addition to coaching 2001-02 BIG EAST Female Scholar Athlete award winner, Monika Manios.

Racking Up Wins
The Canes excelled on the water during the 2003-04 season, taking home numerous first-place finishes throughout the year including medals at the Hurricane Invitational and the Florida Intercollegiate Rowing Association Championships.

Miami’s second-place finish at the BIG EAST Challenge was the best finish in school history. For the second straight season, Jenny Krawec was named to the CRCA All-America Second Team. Additionally, Krawec, along with Rachel Clausing earned a spot on the CRCA All-South Region Team.

Making Moves
Ahead of the 2004-05 season, Miami made the transition to the tradition-rich Atlantic Coast Conference. In their first season in the league, the Canes placed 11 rowers on the ACCC Academic Honor Roll and were awarded the ACC Spring Sportsmanship award. Sophomore Sarah Conlon was also named an All-ACC selection.

The following season, Miami finished in third with 34 points at the ACC Rowing Championships, while Rachel Clausing and Laura Coltman were named to the All-ACC team. Both rowers also made the cut for the inaugural All-ACC Academic Rowing Team.

Changing Times (2007-09)
Robbie Tenenbaum took up the mantle as head coach for the Miami rowing team on July 25, 2007, a position he would hold for the next two seasons.

The Tenenbaum Years
Under Tenenbaum, the Canes would place several rowers not only on the All-ACC team, but also on the CRCA All-South Region second team (Rachel Sporko and Laura Cordner). In 2008, Cordner became the second Cane in program history to be tabbed a CRCA Division I All-American (second team). The 2009 season marked a high-point for the Canes as Miami tied for its best finish at the ACC Championships with a third-place showing.

Laura Cordner
One of the most prolific rowers in program history, Laura Cordner competed for the Miami Hurricanes from 2005-09. Cordner was a three-time All-ACC selection and made an appearance on the ACC All-Academic Team in her final three seasons with the Canes, as well.

As a freshman, she helped her novice eight boat to a bronze medal at the SIRA Championships and, as a junior, Cordner was selected to the CRCA Division I Pocock All-America Second Team.

Carter Comes to Town (2009-13)
On July 30, 2009, Miami Director of Athletics, Kirby Hocutt, named Andrew Carter the new head coach of the Miami rowing team. Carter served as the head coach for four seasons, during which the Canes had a pair of fourth-place finishes at the ACC Championships.

Six Canes earned All-ACC Team recognition during Carter’s tenure as the head coach and 15 Miami rowers were tabbed to the ACC All-Academic Team.

Success Under Sanderson (2013-pres)
Current head coach Dave Sanderson was hired in September of 2013, returning to UM after spending six years as the head coach at Barry University. Sanderson was a Miami assistant coach during the 2006-07 under Debra Morgan.

Expanding Competition
From 2013 to 2015, the Atlantic Coast Conference expanded to nine teams. Despite the expansion, the Canes still placed a rower on the All-ACC Second Team each year in Sanderson’s tenure.

On the Up and Up
While the Canes finished ninth at the 2017 ACC Championships, Miami has steadily climbed the ladder over the last few years, finishing tied for seventh in 2019. Additionally, the Canes have placed at least three rowers on the ACC All-Academic Team each season over the last six years.