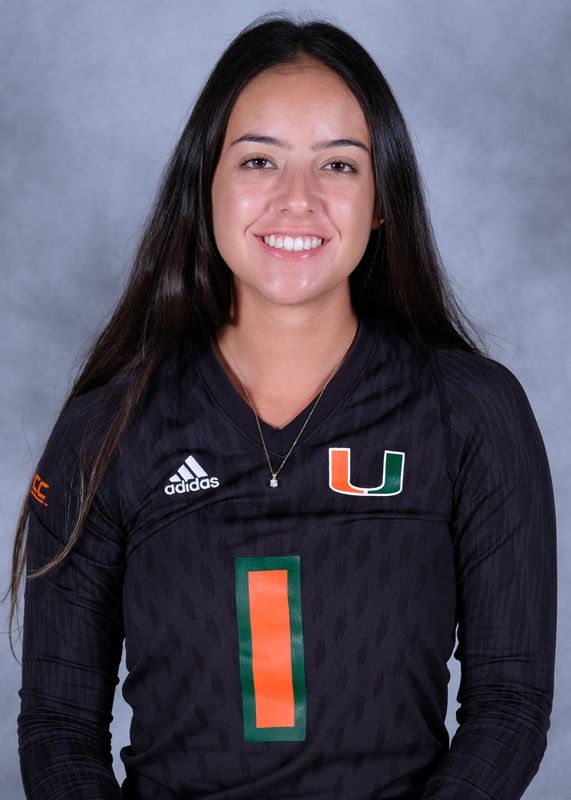 2017 (Sophomore): Played in all but one of Miami’s 12 sets at the Southern Miss Invitational, starting two of the three matches … Started the season with nine digs against Little Rock (Aug. 25) and added eight more digs while also picking up an assist against the host Southern Miss (Aug. 25) later that day … capped off the weekend with three digs in the sweep over Nicholls State (Aug. 26) … Played each set in Miami’s 3-0 weekend at the Sunshine State Classic (Sept. 1-2), accumulating 15 digs and four assists … recorded weekend-best eight digs and career-high three assists against FAU (Sept. 1) … Recorded two digs in ACC opener against Virginia Tech (Sept. 22) and nine more — as well as two assists — in a 3-2 triumph over Virginia (Sept.24) two days later … Put in the best display of her career to date with 17 digs in the four-set win at Notre Dame (Sept. 29), following up with three digs and an assist at Louisville (Oct. 1) two days later … Played in every set at Florida State ( Oct. 4) and Pittsburgh (Oct. 8), recorded a dig in each match … Tied her career high of 17 digs in thrilling win against Duke (Oct.13) and added two more at Wake Forest (Oct.15), while combining for three assists during the 2-0 weekend .. Picked up 10 digs in win against Louisville (Oct. 20) and picked up eight more in five-set heartbreak against Notre Dame (Oct. 22) … Contributed a career-high four assists along with four digs in a win against North Carolina (Oct. 29) after recording one assist and three digs in a sweep of North Carolina State (Oct. 27) … Collected seven digs, two assists and her first service ace of the season in a sweep of rival Florida State (Nov. 1) … Picked up four digs in addition to her second service ace of the season at Pittsburgh (Nov. 3) … Tallied nine digs and a service ace in a win over Boston College (Nov. 9) before recording a career-high three service aces, seven digs and an assist in Senior Day victory over Syracuse (Nov. 12) … Picked up a rare kill  and career-high four assists against Virginia (Nov. 17) and combined for 10 digs against the Cavaliers and Virginia Tech (Nov. 19), in addition to contributing at least one service ace per match for third straight weekend … Combined for 11 digs and two assists in wins over Georgia Tech (Nov. 22) and Clemson (Nov. 24) … Recorded nine digs and two assists in a four set triumph over Charleston (Nov. 30) in the NCAA Championships before picking up nine digs against Florida (Dec. 1) in the next round.

High School: Four-year starter at Pine Crest School, helping her team win the district title in 2015 and finish as the Class 4A state runner-up in 2014 … Recorded more than 1,500 digs and over 120 service aces in her high school career … Three-time Miami Herald First Team All-Broward selection and earned First Team All-Broward honors twice from the Sun Sentinel … Named the 2014 Class 5A-2A Player of the Year by both the Miami Herald and Sun Sentinel … In 2014, was named AVCA Player of the Year in Region 4 of Class 4A … Earned numerous honors on the club circuit, including being named to the 2014 USA Beach High Performance A2 team and earning a spot among the Prep Volleyball Defensive Dandies from 2013-15 … Attended USAV Girls Nationals from the ages of 14 to 18.