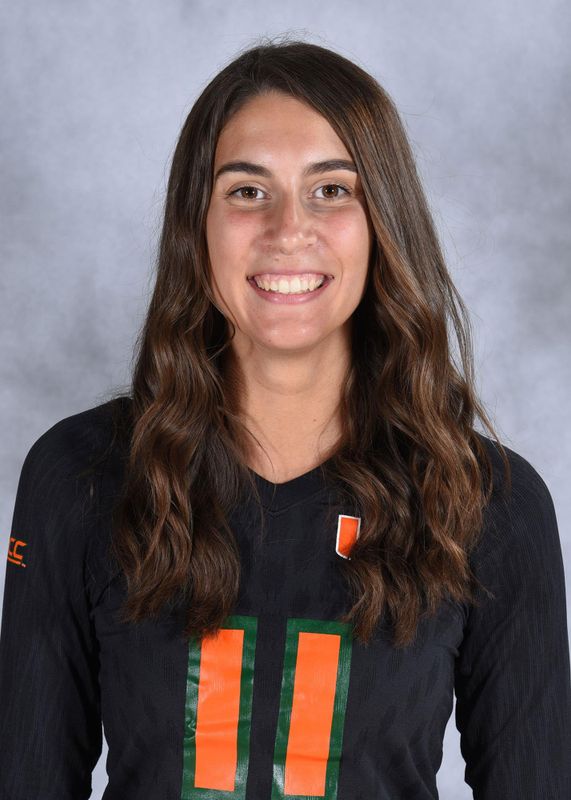 2017 (Junior): Started all 12 sets for Miami at Southern Miss Invitational, accounting for 19 kills (eight against the home team, Aug. 25), nine digs (six at Southern Miss, Aug. 25), 13 blocks (six versus Little Rock, Aug. 25) and an assist … Notched 21 kills in the Sunshine State Classic (Sept. 1-2), including season-high 10 kills in the five-set win against FAU (Sept. 1) … hit a career-best .615 for nine kills on 13 swings in the sweep at FGCU (Sept. 2) and picked up four out of her 10 weekend blocks against the Eagles … tied her season-best of five blocks of five blocks in the home opener against Virginia Tech (Sept. 22) and added two more against UVA (Sept. 24). Pampana had six kills against the Hokies and four against the Cavaliers in the ACC opening weekend, while also contributing a dig in each match … Combined for six block assists in the split weekend at Notre Dame (Sept. 29) and Louisville (Oct. 1), including tying her season-high of five at the Irish. Pampana contributed a total of seven kills in the first weekend of road ACC action … Tallied seven kills (.455 hitting) and a block at Florida State (Oct. 4) … Had four kills and two blocks in the ACC victory over Louisville (Oct. 20) and followed up with eight (.429 hitting) and three respectively against Notre Dame (Oct. 22) while also contributing a dig and an assist in each contest … Combined for nine kills and seven blocks in wins against NC State (Oct. 27) and North Carolina (Oct. 29) … Recorded seven kills and two blocks in a sweep over rival Florida State (Nov. 1) … Tallied four kills, two blocks and a dig at Pittsburgh (Nov. 3) … Contributed six kills, three blocks, one assist and a dig in a win over Boston College (Nov. 9) before recording four kills and two blocks in a victory over Syracuse (Nov. 12) … Helped the Canes see Virginia (Nov. 17) off in five sets with 12 kills on a .450 hitting, season-high seven blocks and three digs, then grabbed five kills and a solo block in the sweep over Virginia Tech (Nov. 19) … Combined for 13 kills, 12 blocks and two digs in wins over Georgia Tech (Nov. 22) and Clemson (Nov. 24) … Tallied eight kills, six blocks, an assist and a dig in a four set victory over Charleston (Nov. 30) in the opener of the NCAA Championship tournament before contributing six kills against Florida (Dec. 1).

2016 (Sophomore): Made an impact at the net, recording a team-high seven blocks to go with three kills in win over Florida A&M (Aug. 26) … Combined for eight kills and three blocks in match against Coastal Carolina (Aug. 27) … Tallied six kills and two blocks against UTSA (Sept. 2) … Hit a team-best .429 to go with her eight kills and three blocks against Lipscomb (Sept. 2) … Tallied three kills against No. 3 Texas (Sept. 3) … Hit a team-best .400 with seven kills and added six digs and two service aces in the win against Loyola Chicago (Sept. 9) … Had two kills, two digs, and a block against Kansas State (Sept. 9) … Had four kills on a .444 attack percentage and added a team-best eight blocks and a service ace against Mississippi State (Sept. 10) … Tallied seven kills on a .333 attack percentage to go along with a team-high six blocks, three digs, two service aces and an assist in match against Delaware (Sept. 16) … Had three kills and two digs in match against Missouri (Sept. 17) … Hit .444 and had a career-high 14 kills to go with three blocks and four digs in win over Duquesne (Sept. 17) … Had four kills, two digs and a service ace at No. 15 Florida State (Sept. 23) … Had three kills, a service ace and a team-high five blocks against Notre Dame (Sept. 25) … Had five blocks and two kills in win over Boston College (Sept. 30) … Had 12 kills, hitting a team-high .500 and added two blocks against Syracuse (Oct. 2) … Tallied six kills and hit .333 with a team-high four blocks at NC State (Oct. 7) … Had four kills and a dig at No. 9 (UNC) … Had four kills and four blocks, while adding a pair of service aces against Pitt (Oct. 14) … Had five kills and hit .556, adding a team-best eight blocks in win over Virginia Tech (Oct. 16) … Had five kills and four blocks against No. 12 Florida State (Oct. 19) … Had five kills, three blocks and two digs in win at Virginia (Oct. 22) … Registered eight kills on a .381 attack percentage and adding two blocks and three digs in win at Notre Dame (Oct. 28) … Had seven kills and three blocks in win at Louisville (Oct. 30) … Led a trio of middle blockers for Miami, recording eight kills and two blocks in match against UNC (Nov. 4) … Had five kills and two blocks in match against NC State (Nov. 6) … Recorded five kills, a team-best five blocks, and a service ace in win at Syracuse (Nov. 11) … Had eight kills on a .438 hitting percentage and tied her career best with eight total blocks in win at Boston College (Nov. 13) … Led Miami middle blockers with seven kills and added three blocks in win at Wake Forest (Nov. 18) … Had six kills and a block at Duke (Nov. 20) … Had six kills and two digs against Georgia Tech (Nov. 23) … Recorded ight kills and two digs in win over Clemson (Nov. 25).

High School: Helped lead her team to the state championship in 2011, 2012 and 2013, where they placed second in each year … Earned recognition nationally for her stellar play, being selected among Italy’s top volleyball players since 2011

Personal: Full name is Lucia Pampana … Daughter of Stefano and Clara Pampana … Was also an elite swimmer, winning a regional championship and competing in the national championships before choosing to focus on volleyball … A leader on and off the court, she was elected class president by her peers.