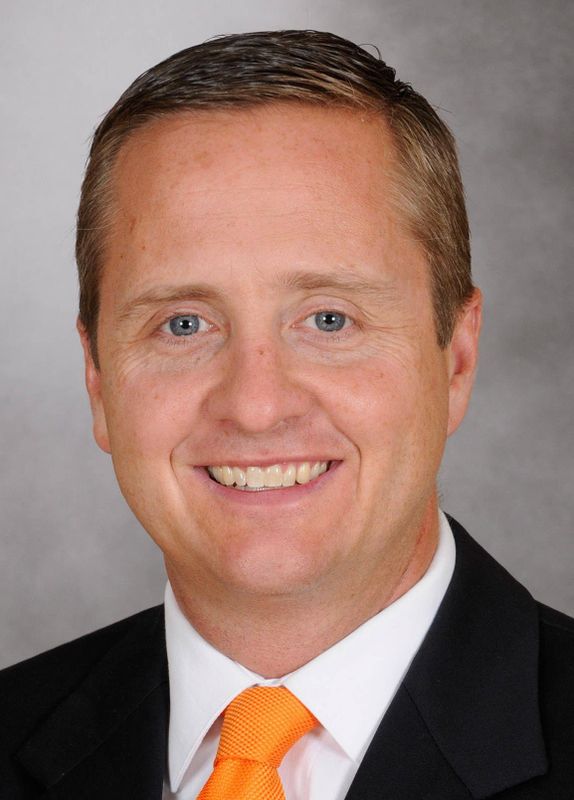 Since taking over as the University of Miami’s Director of Athletics in 2013, Blake James has transformed Miami Athletics, spearheading improvement in all aspects of the department, including postseason appearances, student-athlete support, facility upgrades, ticket sales and academic achievement.

During the 2015-16 academic year, Miami was the only school in NCAA Division I to have its football team play in a bowl game, its men’s and women’s basketball teams advance to the NCAA Tournament and its baseball team advance to the College World Series.  Overall, Miami had 10 sports programs advance to postseason competition to secure its highest finish in the Learfield Directors’ Cup standings in 13 years, an indication of broad-based athletic department success.

That recent success has garnered James and UM national recognition.  In March 2017, James was selected as one of four Division I recipients of the 2016-17 Under Armour Athletic Director of the Year award, an honor given  by the National Association of Collegiate Directors of Athletics (NACDA). In April 2017, James will begin a two-year term as Chair of the NCAA Division I Council, the group responsible for the day-to-day decision-making for all of Division I.

James has placed a strong emphasis on academics during his four-plus years at Miami. In the most recent Graduation Success Rate figures released by the NCAA, Miami student-athletes posted a GSR mark of 90%.  Eight Hurricane teams scored 990 or better out of a possible 1,000 points on the Academic Progress Rates (APR) in 2015-16.  In addition, Miami’s football program received the 2016 AFCA Academic Achievement Award.  In 2016, Hurricane student-athletes also ranked among the nation’s best in time committed towards community service.

Prior to the 2016 football season, James led the university’s football coaching search which resulted in the hiring of Hurricane alum Mark Richt as the football program’s new head coach. Richt paid immediate dividends in 2016 as the Hurricanes posted a 9-4 record, won their first bowl game in 10 years and finished ranked #20  in the final Associated Press poll, their first season-ending ranking since 2009.

In the department’s continuing efforts to better support student-athletes and coaches, the fundraising arm of Miami Athletics, the Hurricane Club, set multiple annual fund records, including $12.2 million raised for the Student-Athlete Excellence Fund in 2015-16 — an increase of 21 percent over the prior year. The Hurricane Club also announced an all-time record of 11,500 active members in 2016, a 155 percent increase in active membership since 2010.

During James’ tenure, Miami has completed several facility enhancements, including the opening of the Schwartz Center for Athletic Excellence; the completion of the student-athlete training table, fueling station and dining hall; new artificial and natural playing surfaces and lights on the Greentree Practice Fields’ and a center-hung scoreboard inside the Watsco Center.

James has also led multiple, multi-million dollar capital renovation projects, including renovations of the Hecht Center and the men’s and women’s basketball offices. Over the past year, Miami Athletics has secured six leadership gifts of seven figures-or-more, including the largest donation in department history – a $14 million gift from the Soffer Family, which will serve as the lead gift for the Hurricanes’ $34 million Carol Soffer Football Indoor Practice Facility, scheduled to break ground this year.

Ticket sales are also at an all-time high. In 2016, Miami sold a school-record 42,000 football season tickets and ranked first among Power 5 programs in attendance percentage increase (23 percent) over 2015 attendance. The Hurricanes have also sold out their men’s basketball season tickets in back-to-back seasons for the first time ever.

In addition, Miami has transformed its broadcast, communications and marketing departments into one of the nation’s leaders in digital media and video production. In 2016, Miami aired more live events on ESPN3 than any other ACC institution. James was also instrumental in helping Miami strike one of the largest apparel deals in the country with adidas.

Prior to being named AD, James served Miami Athletics in the roles of Interim AD and Senior Associate AD for Development and Ticket Operations, where he oversaw the day-to-day operations of development, ticket sales and ticket operations. He also was a member of the Hurricanes’ senior staff and provided sport supervision.

James came to UM after spending seven years at the University of Maine, where he first served as Senior Associate Athletic Director before serving as Director of Athletics from 2005 to 2010. During his tenure at Maine, athletics experienced tremendous success, including three trips to the Frozen Four for the men’s ice hockey program and NCAA playoff berths for football, baseball (two), women’s basketball and softball. James implemented a comprehensive $17 million facility improvement plan at Maine, which included an indoor practice facility and numerous other facility upgrades and renovations. Academically, the program flourished, earning the conference academic cup twice and student-athletes maintaining a 3.0 GPA or above.

Prior to his stint at Maine, James worked in athletic development at Providence College, where he established the “Friars Forever” campaign and the Friar Athletic Fund.

James is no stranger to South Florida, beginning his athletic career with the University of Miami, working in ticket sales, corporate sales and athletic development.  In 1995, he was hired as Miami’s Director of Ticket Sales, serving in that capacity until 1997, when he was named an athletic development officer at the University of Nebraska.  He returned to Miami in 1998 as the Director of Major Gifts and Corporate Sales and was promoted to the Director of Athletic Development at Miami in 2000 before moving on to Providence in 2002.

James graduated from Minnesota State University – Mankato with a Bachelor’s degree in Marketing in 1992 and later received his Master’s degree in Sports Administration from St. Thomas University in 1994. He and his wife, Kelly, have two children: daughter, Haley, and son, Ryan.