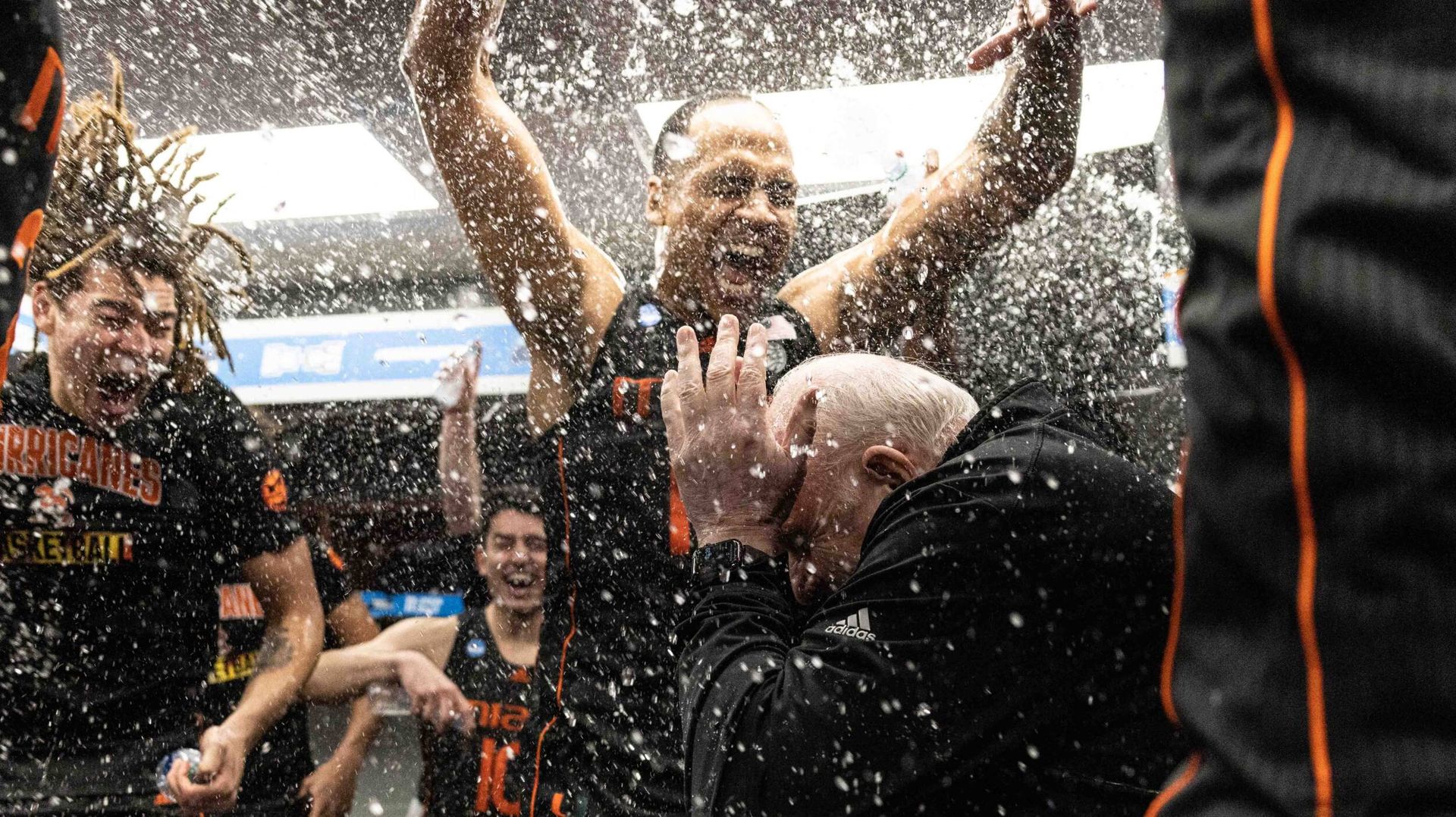 CORAL GABLES, Fla. – A national championship performance. A historic run through the NCAA Tournament. All-Americans aplenty and a memorable homecoming for one of Miami’s own.

Over the course of the last 10 months, the Hurricanes created their share of unforgettable moments from the football field to the basketball court, from the swimming pool to the track and beyond.

Before a new season of competition begins, here’s a look back at some of those moments from the 2021-22 season that was.

In many ways, it was a season of resilience for Miami.

After losing their first two conference games by a combined five points and losing a series of starters to injuries, the Hurricanes notched a pair of Top-25 wins with victories over North Carolina State and Pittsburgh. Miami closed the year with wins in five of its last six games and saw the emergence of a budding star.

Second-year freshman quarterback Tyler Van Dyke was pressed into duty after a season-ending injury to veteran D’Eriq King and wound up finishing as the ACC Rookie of the Year after throwing for 2,931 yards and 25 touchdowns while completing 62 percent of his passes.

In December, Van Dyke and more than a few of his teammates were there when former Hurricanes offensive lineman Mario Cristobal – a two-time national champion at Miami – was announced as the program’s new head coach.

Cristobal’s homecoming has undoubtedly generated plenty of excitement in Coral Gables and beyond and the coach has, on more than one occasion, noted how much it’s meant to return to his alma mater.

“I played here. I played here. I practiced on that field…To be able to play here was an incredible dream. Then it came back and it hit me right between the eyes,” Cristobal said in March. “Twenty-five years of working in this profession has earned you the privilege, the honor of being able to come back to your alma mater and do this.”

After finishing the regular season with a 24-4 mark, the Hurricanes returned to the NCAA Tournament for the first time since 2017 and advanced to the second round before falling to 16th-seeded Florida.

The Hurricanes notched their first victory over rival Florida since 2012 when Taylor Shell scored in overtime and later in the year, Miami picked up its first win at Boston College when Jackie Koerwitz scored with 13 seconds remaining.

Her time of 21:05.98 marked the fastest ever run by a Hurricane at a regional meet and was the second-fastest 6K time in program history behind only the 21:08.2 she ran earlier in the season.

From the start, it was a history-making season for Miami.

In their first game of the 2021-22 campaign, the Hurricanes posted a 72-67 win over Jackson State, giving head coach Katie Meier her 304th win at Miami. The victory made her the winningest basketball coach – men’s or women’s – in school history.

Four months later, the Hurricanes put together a memorable run through the ACC Tournament, beating fourth-ranked Louisville and 20th-ranked Notre Dame to advance to the tournament’s championship game for the first time.

Graduate student Destiny Harden hit a buzzer-beater to give Miami the 61-59 win over Louisville and cap a double-digit fourth-quarter comeback. During the final 4:29, Harden scored all 15 of Miami’s points. A day later, the Hurricanes became just the second seventh-seeded team to advance to the conference title game with their 57-54 win over the Irish.

A week later, the Hurricanes earned the 15th NCAA Tournament berth in program history and their ninth under Meier.

Miami advanced to the second round with a win over USF before the Hurricanes’ season ended with a 49-33 loss to top-seeded South Carolina, which went on to win the national championship.

The 49 points marked the fewest scored by the Gamecocks during the entirety of their 35-2 season.

Graduate student Kelsey Marshall finished the year as a third-team All-ACC selection, while Ja’Leah Williams earned a spot on the ACC All-Freshman Team.

“As a coach, when you play your best in March, you’ve just got to feel great about it,” Meier said. “There’s some really great openings. I liked that. I loved the journey with the players…We are not a team that quits.”

The Hurricanes capped an unforgettable season by making school history and advancing to the Elite Eight of the NCAA Tournament for the first time.

Along the way, Miami – which was picked to finish 12th in the ACC – notched a win over then-No. 2 Duke at Cameron Indoor Stadium. The Hurricanes beat North Carolina by 28. They had a pair of comeback wins over Syracuse and left fans at Virginia Tech stunned when Charlie Moore sank a half-court buzzer-beater to give Miami a 78-75 win.

The Hurricanes earned an at-large berth in the NCAA Tournament as a No. 10 seed and upset both seventh-seeded USC and second-seeded Auburn before beating Iowa State in the Sweet 16.

Miami saw its magical run end after a loss to eventual national champion Kansas, finished the season with a 26-11 record and was ranked No. 16 in the final Ferris Mowers Coaches Poll.

Said Hurricanes head coach Jim Larrañaga, “Being chosen 12th in the preseason, but being one of the final eight teams in the entire country. My hat’s off to them. I love working with them. They’re a great group of kids and they’re always going to be part of our Miami family.”

Mia Vallée arrived at the NCAA Women’s Swimming & Diving Championships hoping to put together the performance of a lifetime.

She did – but it took a little longer than she would have liked.

After a tough second dive during the preliminaries of the 1-meter springboard, Vallée faced an uphill climb on the scoreboard. But she had confidence in her ability to execute the rest of her dives, dives she knew had the degree of difficulty she needed to make that move up the scoreboard.

The third-year diver wasn’t wrong and she not only earned a spot in the finals, she went on to win the national championship – in record-breaking style.

She posted a total score of 365.756 in her event, besting the mark set by Minnesota’s Sarah Bacon in 2019. She became the 14th Miami diver to win a title under head coach Randy Ableman and was later named the ACC Women’s Diver of the Year, while Ableman was recognized as the ACC Men’s and Women’s Diving Coach of the Year.

On the men’s side, divers Zach Cooper and Max Flory earned All-American honors on the platform. Meanwhile, Miami’s 400-yard freestyle relay team of Carmen San Nicolas, Jacey Hinton, Adrianna Cera and Sydney Knapp posted a school-record time of 3:18.28 at the ACC Championships, while Danika Huizinga posted a new school-record time of 1:55.49 in the 200-yard backstroke.

Last month, the Hurricanes posted their best finish at the ACC Championships, placing fifth in the field, with second-year freshman Alyssa Bacchus becoming the first Miami rower to earn a spot on the All-ACC first team. Fellow rower Constance Stirling earned a spot on the All-ACC second team and the duo helped the first varsity eight boat finish fourth in the grand final.

Miami also finished the year earning its first ranking in the Pocock CRCA poll, checking in at No. 20.

At season’s end, head coach Dave Sanderson stepped down to pursue other opportunities. During his nine-year tenure at Miami, the Hurricanes had nine student-athletes earn All-ACC honors, while 40 earned All-ACC Academic nods.

The Hurricanes finished the season placing fifth at last month’s ACC Regional in Tallahassee. Miami finished with a 54-hole score of 896, just five strokes shy of qualifying for the national championship tournament.

Following the season, former Hurricanes All-American Patti Rizzo announced she was retiring as coach of her alma mater. Miami qualified for 11 regional appearances during her 12-year tenure and Rizzo guided Miami to 56 top-five tournament finishes and five tournament victories. Six Hurricanes earned All-American honors under Rizzo’s guidance and the golf team earned a perfect 100 NCAA Graduation Success Rate in each of her seasons as coach.

Janice Olivencia, who most recently served as both an assistant coach and associate head coach at Florida, was named Miami’s new head coach on June 13.

The Hurricanes posted their best regular-season record in six years and were selected as a national seed for the NCAA Tournament.

Miami, which finished the season with a 40-20 mark, was led by All-American pitchers Andrew Walters and Carson Palmquist.

Walters, a finalist for the NCBWA Stopper of the Year, had an ACC-leading 14 saves and posted a 1.65 ERA. Palmquist, meanwhile, emerged as Miami’s ace after moving from the bullpen to the starting rotation. He finished the year with nine wins, a 2.89 ERA and 118 strikeouts.

The Hurricanes qualified for the NCAA Team Championship and advanced to the second round before seeing their season end with a loss to then-reigning national champion Florida.

It marked the first time since 2018 that Miami advanced to the second round of the tournament and the Hurricanes did so with a comeback win over USF in their opening match.

Graduate student Dan Martin posed a 25-7 mark in singles play and earned first-team All-ACC recognition. He had a 6-2 record against ranked opponents and finished the year at No. 60 in the final ITA singles rankings.

Daevenia Achong and Eden Richardson put together a memorable run through the NCAA Doubles Championship tournament, beating three higher-ranked teams before finishing the season one match short of a national title.

Achong and Richardson are the third pair in UM history to reach the national championship match and the first to do it since 1998. Both finished the year as ITA All-Americans.

As a team, the Hurricanes hosted a regional, advanced to the Sweet 16 and finished the year ninth in the ITA rankings after posting a 19-6 record. It marked Miami’s first top-10 finish since 2016, when the Hurricanes finished the season ranked 10th.

“I think we had an unbelievable season. We definitely took steps forward…the season we had, I thought, was exceptional,” said Hurricanes head coach Paige Yaroshuk-Tews. “I think we squeezed everything out of these kids. I think they improved as the season went on. We had a little bit of adversity. We were able to bounce back from it. I love these kids. They’re great kids. They had a great season…I’m really proud of them.”

The women’s track team entered the final day of the ACC Outdoor Championships in sixth place.

The Hurricanes finished the day as conference champions.

Thrower Debbie Ajagbe collected her share of points for Miami at the championship meet, finishing with gold in the discus, bronze in the shot put and placing fourth in the hammer. Moriah Oliveira placed first in the 400-meter sprint, while Kennedy Brace placed third in the same event. And Alfreda Steele posted top-three finishes in both the 100-meter and 200-meter to help the Hurricanes add to their point tally.

“I’m proud of all of our teams, but especially proud of this group…They just really, really wanted it,” Miami director of track and field/cross country Amy Deem said. “We had to work really hard to get to this point. I don’t think anybody coming into the championships, except us, expected us to do this. From the first day to the end, they just kept fighting and kept fighting.”

On the men’s side at the ACC Outdoor Championships, Decio Andrade earned a gold in the hammer throw and Ayman Zahafi won the 800-meter run. Russell Robinson won the gold in the triple jump.

Ajagbe, Andrade and thrower Jeff Williams all went on to finish the outdoor season as USTFCCCA First-Team All-Americans after their solid showings at the NCAA Outdoor Track & Field Championships.

In March, graduate student Isaiah Holmes capped an impressive indoor season by earning recognition as the ACC Men’s Indoor Field Performer of the Year. He became the first male student-athlete to win the award at Miami.

Holmes won gold at the conference indoor championships in both the long jump and the high jump.