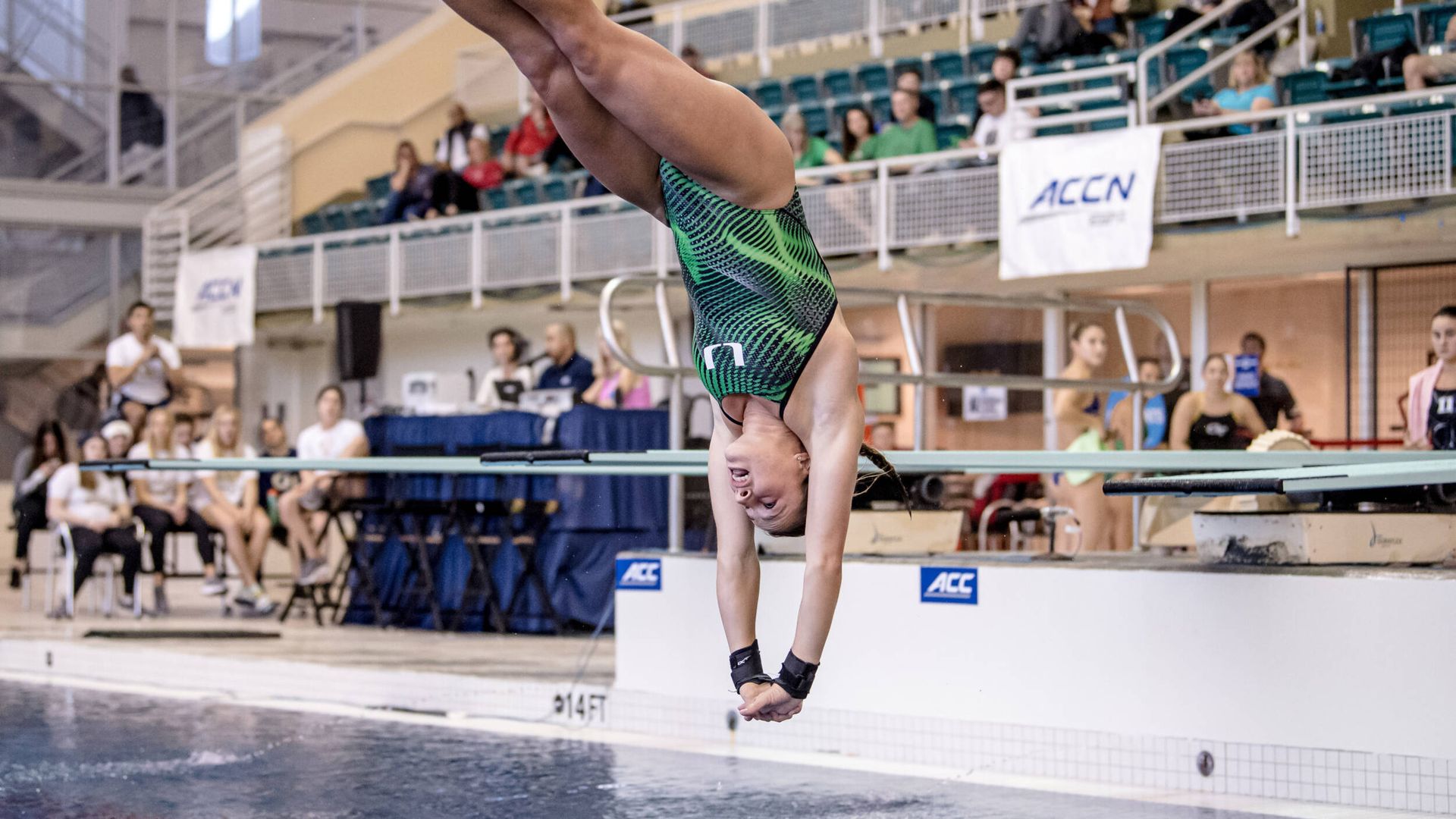 Peaking at The Right Time

ATLANTA – It all comes down to this.

“Both have improved so much this year, and both are peaking at the right time,” head diving coach Randy Ableman said. “That makes me feel good as their coach. We’ve got them to the championship meet in their best form, and now it’s a matter of performing.”

The Hurricanes will compete in the 1-meter springboard on Thursday, with prelims beginning at 12:30 p.m. A field of roughly 45 competitors will be whittled down to eight for the finals, which will begin near 8 p.m.

Both divers will also take part in Friday’s 3-meter springboard event, which follows a similar schedule.

“The way they’ve led up to it and practiced since we’ve been here, they don’t miss dives,” Ableman said. “Their heads are in a good place, they’re rock solid, and I have a really good feeling about the next few days.”

Vallée, who won a gold medal on the 3-meter springboard at the ACC Championships, will feature a challenging list each of the next two days.  Vallée was an ACC silver medalist in the 1-meter and also finished second in both events at the Zone meet – all in the same pool.

“Mia continues to add difficulty to her list,” Ableman said. “She’ll have one of the hardest lists of dives of any of the girls on the 1-meter. She’s gotten stronger and more consistent. Those are two great attributes in this sport.”

Ableman has enjoyed watching a full season of training for Gullstrand, who enrolled at Miami during the spring 2021 semester and competed at last year’s NCAA Championships with less than a full month of training.

Gullstrand won two medals at this year’s ACC Championships – one bronze, one silver – and also finished in fourth place in both springboard events at the Zone meet.

“Like Mia, she’s improved this year,” Ableman said. “She’s in the best shape of her life and peaking at the right time. They’ve really done it together. They push each other in practice every day. They’re very good friends, but they’re both competitors and both champions.

“It’s nice to have a duo like that. I’m very much looking forward to what she does here at the NCAAs.”

Ableman said this year’s large field is unique in its make-up and will provide for a different sort of challenge for both divers.  Due to the COVID-19 affected 2019-2020 season, several divers are competing who wouldn’t have otherwise been participating.

“Every senior from last year is back, and there are a bunch of talented kids here. There’s really a logjam of talent. We have two of the best divers in the NCAA this year but there are a couple women who went to Olympics, the defending champions are here…it’s a really deep field,” Ableman said. “It’s not going to be easy just to make the finals but if we dive right, I don’t care about anyone else. We have to bring it in the prelims and if we can make our way through that, I think we’re going to have a great shot at something special.

“You have to stand up there and get focused…these girls are veterans. It’s not their first rodeo. They come in with more experience than they had last year. Hopefully, that’ll pay dividends in the prelims.”