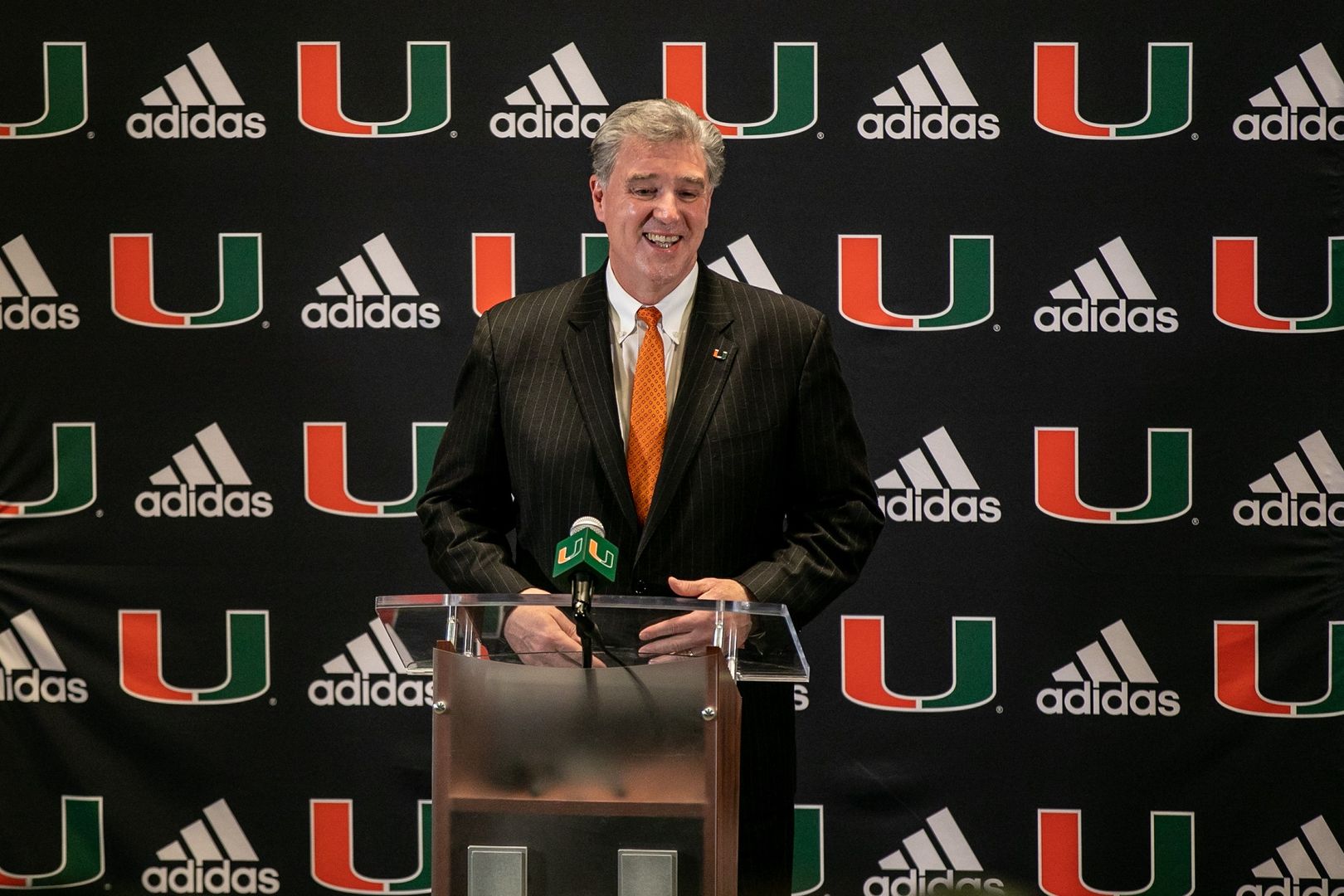 As the calendar flips to March, it is an exciting time for Miami Athletics. Our spring sports are in full swing, our winter sports are making their postseason push and our football team is finishing up its workouts in preparation for spring practice.

Speaking of football, Mario Cristobal has assembled an impressive coaching staff that is making headlines throughout the college football landscape. It speaks to Mario’s leadership and vision, as well as the power and tradition of Canes football, that so many accomplished coaches want to join us in building our championship culture. Spring practice kicks off on Greentree on Monday, March 7.

Our men’s basketball team, currently 20-9 and 12-6 in ACC play, faces Boston College Wednesday night in Chestnut Hill at 9 p.m. on ACC Network. The Canes can clinch a top-four seed and double-bye in the ACC Tournament with a win in either of their remaining regular season games. And Jim Larrañaga is just one victory away from setting UM’s all-time career wins mark. Tune in to cheer on the Canes!

Our women’s basketball team ended its regular season campaign Sunday with a resounding 76-40 over Clemson. The Canes finished 17-11 and 10-8 in ACC play, and now await their ACC Tournament second round opponent, which will be either Duke or Pittsburgh Thursday night at 6 p.m. in Greensboro, N.C. Good luck to Katie Meier and the Canes!

Our 22nd-ranked baseball team has won seven of its first eight games – its best start to a season since 2013. The Canes took two of three games from Harvard last weekend, including a dominating, 10-0 win in the series finale. Next up is a huge, three-game home series this weekend against Florida. All three games are sold out so The Light will be electric. You can watch Friday and Saturday’s games on ACC Network Extra and Sunday’s game on ACC Network.

Our men’s tennis team pushed its record to 9-1 after defeating FAU 4-1 and Liberty 7-0 this past weekend. The Canes, which handed the Owls their first loss of the season, have now won four straight dual matches and only conceded five matches in their nine wins. Our women’s tennis squad has moved up to 15th in the national rankings and opened conference play with two home wins over Georgia Tech and Clemson to improve to 7-1 overall.

Our golf team finished seventh in last weekend’s FSU Match up in Tallahassee, led by Kristyna Frydlova, who shot 3-under in the final round to finish tied for 12th.

Last week we launched our Together 4 Her campaign. Launched in conjunction with the 50th anniversary of Title IX legislation, Together 4 Her is a year-round initiative by UM Athletics that showcases accomplishments of women from around the university while supporting gender equality on and off the field of play. Click here to learn more.

The signature event for Together 4 Her is our eighth annual Celebration of Women’s Athletics presented by adidas. This year’s CWA will take place on Sunday, April 10, at 5 p.m. at the Carol Soffer Indoor Practice Facility. Click here for ticket information. We hope to see you there!

Three of our student-athletes — Selena Fortich (soccer), Abigail Schwenger (rowing) and Priscilla Hernandez (volleyball) – received ACC Postgraduate Scholarship Awards. Congratulations to Selena, Abigail and Priscilla! In addition, I want to commend our student-athletes for their community service efforts. Miami finished third in the nation and first in the ACC in the 2021 NCAA Team Works Community Service Challenge, posting an incredible total of 3,174 hours of community service!

As I mentioned in my last letter we take great pride in Athletics serving as one the University’s three pillars, and we also take great pride in our role in the University’s Ever Brighter campaign. Ever Brighter is UM’s most ambitious fundraising campaign ever, a $2.5 billion initiative that is accelerating our drive to shape a brighter future. As part of this campaign, Miami Athletics has an overall campaign goal of raising $225 million by 2025 which will directly impact our 400-plus student-athletes and equip us with the resources to compete at the highest level. Please click here to learn how you can help!

Thank you again for the support. The passion that our community continues to display for all our student-athletes who wear the orange and green is phenomenal. Go Canes!