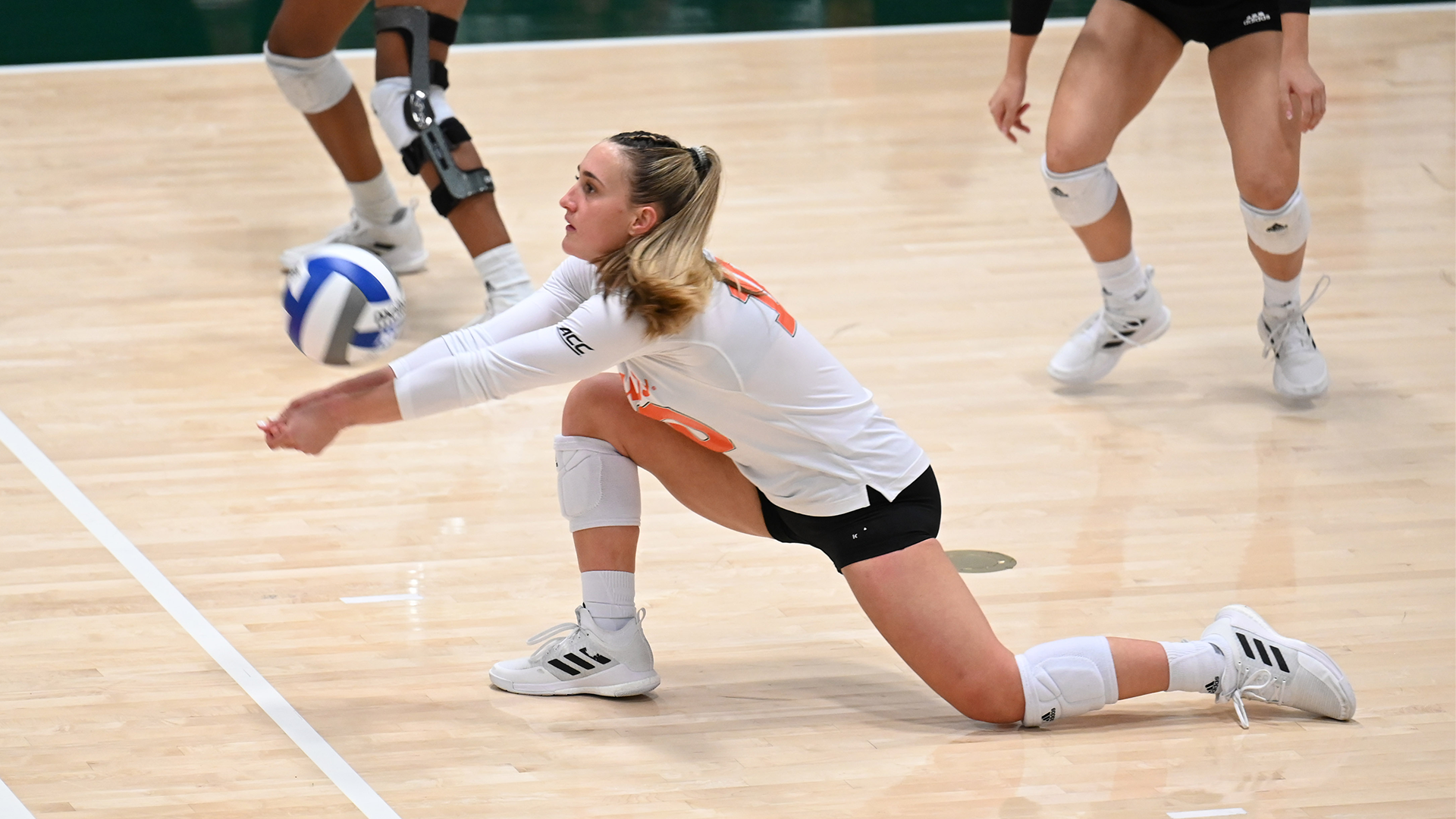 CORAL GABLES, Fla. – The University of Miami volleyball team finished its regular season with a four-set win on Senor Day over Wake Forest inside the Knight Sports Complex on Wednesday afternoon.

“This was not our best performance of the season by any stretch, and a lot of that is credit to Wake Forest,” said head coach Jose “Keno” Gandara. “They’re really good. They have great length and great arms. That’s a good combo, and they’ll only be tougher next year. Hats off to them – we’re thrilled to win this one.
“Senior night is always a wild card. I could wax poetic about this group of graduating girls. They have had some really challenging stretches here at Miami, and they deserve this win, this season, and whatever comes on Sunday night. This class will go down in history as one that has fundamentally altered the trajectory of this program in the best way, and mostly I’ve just had great seats to watch that process unfold. The NCAA tournament is special for so many reasons, but the most underrated one is that you get to extend your time with the seniors. I’ll certainly be savoring every moment from now until the end.”

Savannah Vach registered her 11th double-double of the year with 48 assists and 18 digs.

Angela Grieve notched her 24th match this season with double-digit kills, 14. Janet Kalaniuvalu added in 19 kills in the win.

In a highly competitive opening set, it was Miami who used a 4-0 run to take a 13-9 lead and eventually a 15-11 advantage to the media timeout. Wake Forest rattled off five straight points out of the break to force the Hurricanes to call their first timeout. Kalaniuvalu sparked a 5-1 Miami run, putting the Canes ahead 24-22, as the Demon Deacons spent both of their timeouts. The teams fought a tightly contested set to extra volleyball where Wake Forest earned the win, 28-26.

Miami jumped in front early in the second frame as it took nine of the first 14 points that included two separate 3-0 runs. The Canes utilized a 4-0 run to extend their lead to five, 19-14. The Hurricanes never surrendered the lead in the set despite Wake Forest drawing as close as three two different times late. A service error from the Demon Deacons locked in the 25-21 set victory.

Yardimci began the third set with a kill as Miami bolted in front early, 6-2. The set was evened by Wake Forest at 10 all but the Hurricanes regained the lead at 15-12 to head to the media break. Miami held strong in front to take the set, 25-19.

An ace from Hernandez quickly put the Hurricanes up, 9-5, early in the fourth set to make the Demon Deacons use their first timeout. Miami never let up as Wake Forest pulled within two on two twice late. The Canes took the fourth set, 25-19.

Next up, the Hurricanes will await their postseason fate when the 2021 NCAA Division I Women’s Volleyball Championships bracket is announced during the selection show at 8:30 p.m. on Sunday, Nov. 28 on ESPNU.