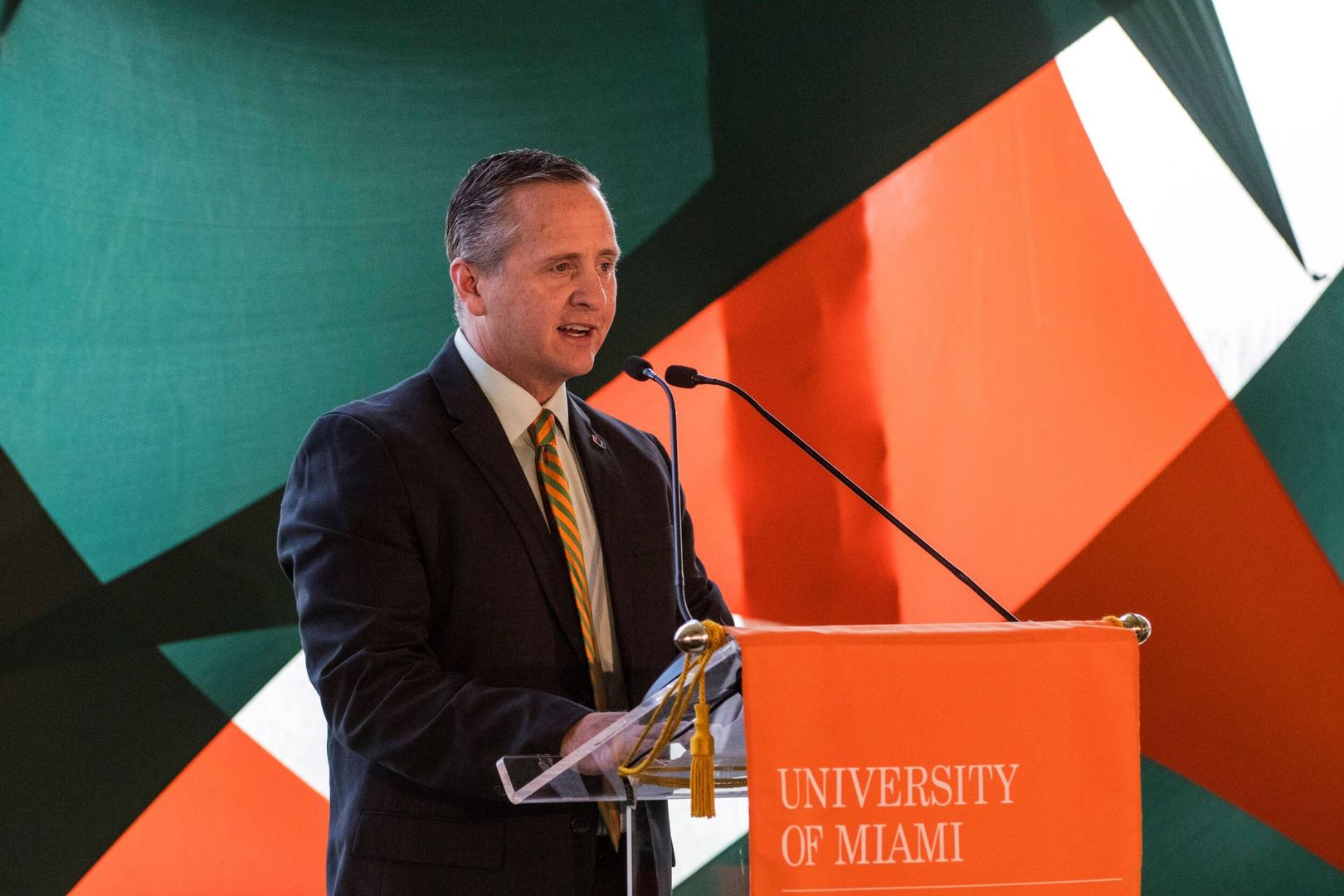 A Message from the Athletic Director: October 2021

It’s a busy and exciting time of the year for Miami Athletics as we have nine teams currently competing while our baseball and basketball teams have started practice in preparation for their upcoming seasons.

Our football team is off this weekend and looks to get back on track next Saturday, October 16, with a key ACC showdown at North Carolina. Kickoff is 3:30 p.m. on either ESPN, ESPN2 or ACC Network. The network designation will be announced this Monday. Good luck to the Canes in Chapel Hill!

We have three more football home games remaining — October 23 against NC State, November 6 against Georgia Tech and November 20 versus Virginia Tech. The NC State game is our annual Pink Game and we will also be honoring the 2001 national championship team on their 20th anniversary. Our Homecoming celebration is slated for November 6. Please click  HERE  for ticket information. We look forward to seeing you at Hard Rock Stadium!

We inducted legendary coach Howard Schnellenberger into our Ring of Honor at halftime of last week’s game against Virginia. Howard’s wife, Beverlee, and sons Stuart and Tim also served as our honorary captains during the pregame coin toss and more than 40 of Howard’s former players were there to share in the special moment. I want to thank the Schnellenberger family and everyone who came out to honor Howard. We miss you, Coach!

Our volleyball team ran its record to 13-2 this week with a 3-1 win over Florida State at home. The Canes, off to their best start in 10 years, now own a 4-1 mark in ACC play. Keno Gandara’s squad looks to continue that momentum tonight when we square off against Duke in Durham at 6:30 p.m. Good luck to the Canes!

Our soccer team lost a heartbreaker at Wake Forest on Thursday night, 2-1 in double overtime. The Canes will look to regroup Sunday when they face top-ranked Florida State in Tallahassee. Kickoff is 12 p.m. on Bally Sports Florida. Tune in to root on the Canes! Goalkeeper Melissa Dagenais is the reigning Co-ACC Defensive Player of the Week honors after posting her fourth clean sheet of the season in our win at Boston College. Congratulations to Melissa!

Our cross country squad is off this weekend before heading to Charlottesville, Va., on October 15 for the XC23 Invitational – their last meet before the ACC Championships. Our women’s team captured their 6K division race at last week’s Paul Short Invitational and are currently ranked 14th in the Southeast Region. Elle Mezzio earned ACC Freshman of the Week honors – the first Cane to do so since the award launched in 2016. Congratulations to Elle!

Our swimming and diving team defeated FIU in its first dual meet of fall competition last weekend. Next up is a trip to Dallas this weekend for the SMU Classic, which features Missouri, Michigan, Arizona and Louisville in addition to the host Mustangs. Good luck to the Canes in Big D!

Our golf team, which finished second in its last outing at the Mercedes-Benz Invitational, returns to action on October 17 at the Jim West Challenge hosted by Texas State. Good luck to the Canes on the links!

Our tennis teams are continuing their fall tournament action this week. Isabella Pfennig advanced to the second round of the ITA All-American Championships in Charleston, S.C., before dropping a tough three-set match to the third seed. The rest of the team is competing at Vanderbilt’s June Stewart Invitational, which also features Kentucky, Illinois and Iowa State. Benjamin Hannestad advanced to the second round of this week’s ITF event in Naples, while Dan Martin dropped his opening match. The rest of our men’s team is heading to Athens, Ga., to compete in the Bulldawg Invitational, which features 12 of the top teams in the nation. Best of luck to all our tennis student-athletes!

If you have any questions or need any assistance, please feel free to contact a member of our staff. For the latest information on UM Athletics, please be sure to visit our website – miamihurricanes.com – download our Miami Hurricanes app or follow us on our various social media channels. I hope that you and your loved ones are staying safe and healthy. Enjoy this month’s magazine!