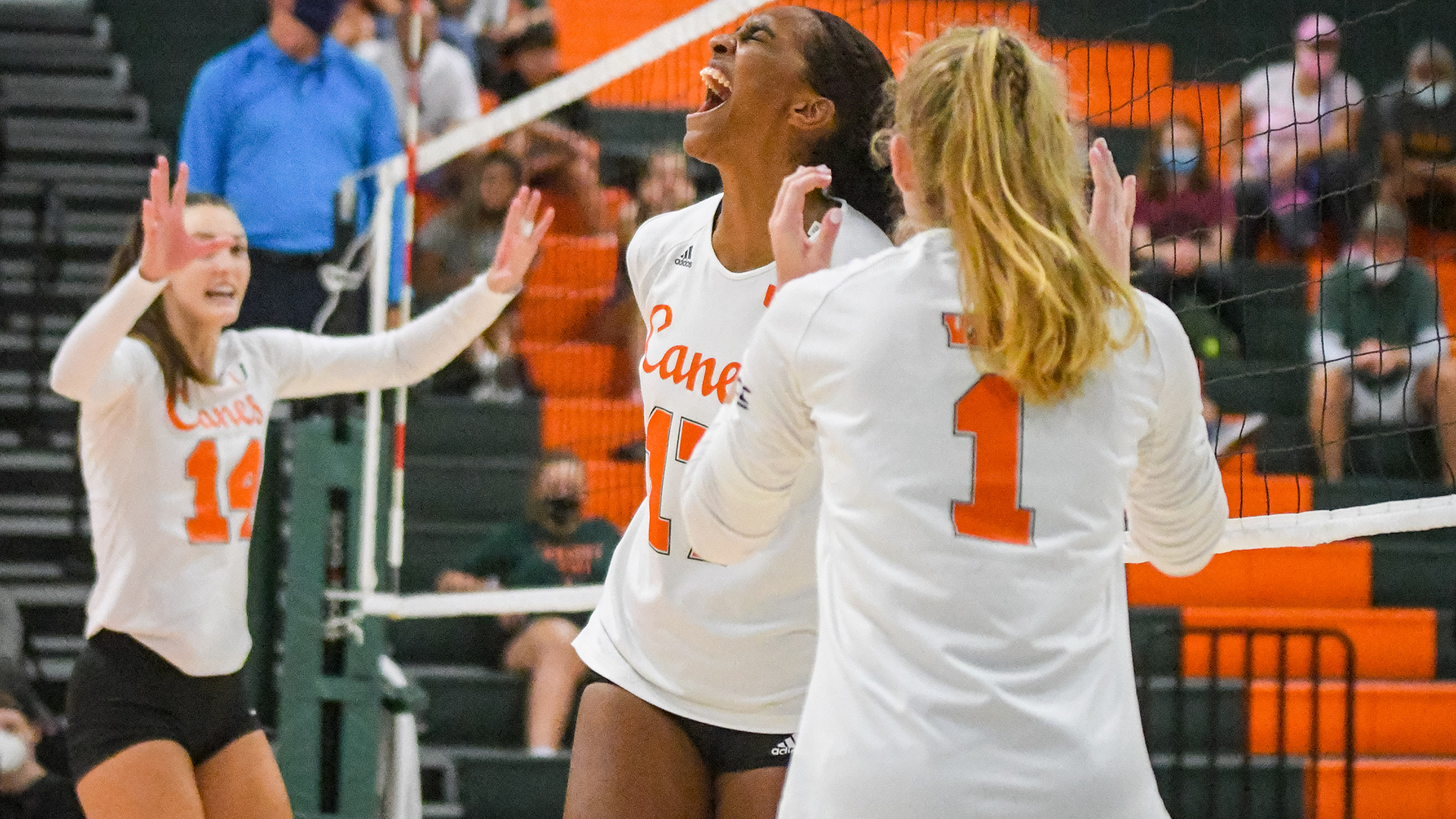 BOCA RATON, Fla. – Junior middle blocker Janice Leao was the spark for the University of Miami volleyball team on Friday afternoon who capped off the Sunshine State Classic with a sweep over Florida Gulf Coast on Abessinio Court.

The Hurricanes improve to 9-1 on the year heading into conference play next weekend, while the sweep is the eighth this season.

Miami finished the Sunshine State Classic with a 2-1 record, earning sweeps over host Florida Atlantic and FGCU, and falling 3-2 to Central Florida.

“It’s been a few since we’ve gotten FGCU, they’re always really tough,” said head coach Jose “Keno” Gandara. “Credit to Matt Botsford – he’s got a well-oiled machine over there. My respect for that program has really grown exponentially since my time here, so to win this one feels great. That team is going to win a lot of matches this season.

“Serving was the whole deal today, and really, all weekend. It’s long been our identity, but this really is a whole different level. The pressure is from all six rotations and the error percentage is low. It gives us a chance in every single match.  The girls were great prepping a plan and then putting it into action. Peyman (Yardimici) did a nice job in all phases today. We needed her to score, and she did. She improved her defense. Her blocking was a positive. We expect so much from her as a freshman – frankly, probably more than we should – and she has handled it wonderfully.”

Leao recorded 11 kills on 17 attempts in the match to tally a .529 attacking percentage. The junior added six blocks, two digs, and an ace to her afternoon stat line.

Redshirt sophomore Angela Grieve notched double-digit kills with 13 to go along with three digs, a block, and an ace.

As a team, the Hurricanes held FGCU to a .078 attacking percentage in the match.

It was an opening set of big runs and strong defensive play at the net for the Hurricanes as they cruised to the first set win. UM held FGCU to an astounding .000 attacking percentage in the set. On offense, Miami had four different runs where it scored three or more straight points, including a 4-0 run to open the match. Four different Hurricanes – Grieve, Nyah Anderson, Leao, and Peyman Yardimici – had three or more kills in the opening set to help the ‘Canes to the 25-17 win.

Set two was déjà vu as UM once again opened a second straight set on a 6-1 run to quickly get out in front. The Hurricane attack was unstoppable in set two, hitting just under .500 with an attacking percentage of .481. For the fourth straight set, after holding FAU to under .100 hitting in sets two and three last night, the ‘Canes once again held the opposing hitters under .100 as FGCU hit just .097 in the second set. Miami coasted to the 25-13 set win to go up 2-0 in the match.

FGCU came out to battle in the third set as the point margin did not exceed more than three points for much of the set. The third set included seven combined ties and lead changes compared three combined between sets one and two. Despite a stronger attack from the Eagles who hit .158 in the third set, Miami pulled away late to close the on a 4-0 run for the 25-20 set win and match sweep.

The Hurricanes will remain on the road next weekend as they open conference play at Louisville on Sept. 24 at 7 pm (ET) followed by a 1 pm matchup in South Bend, Indiana, against Notre Dame.