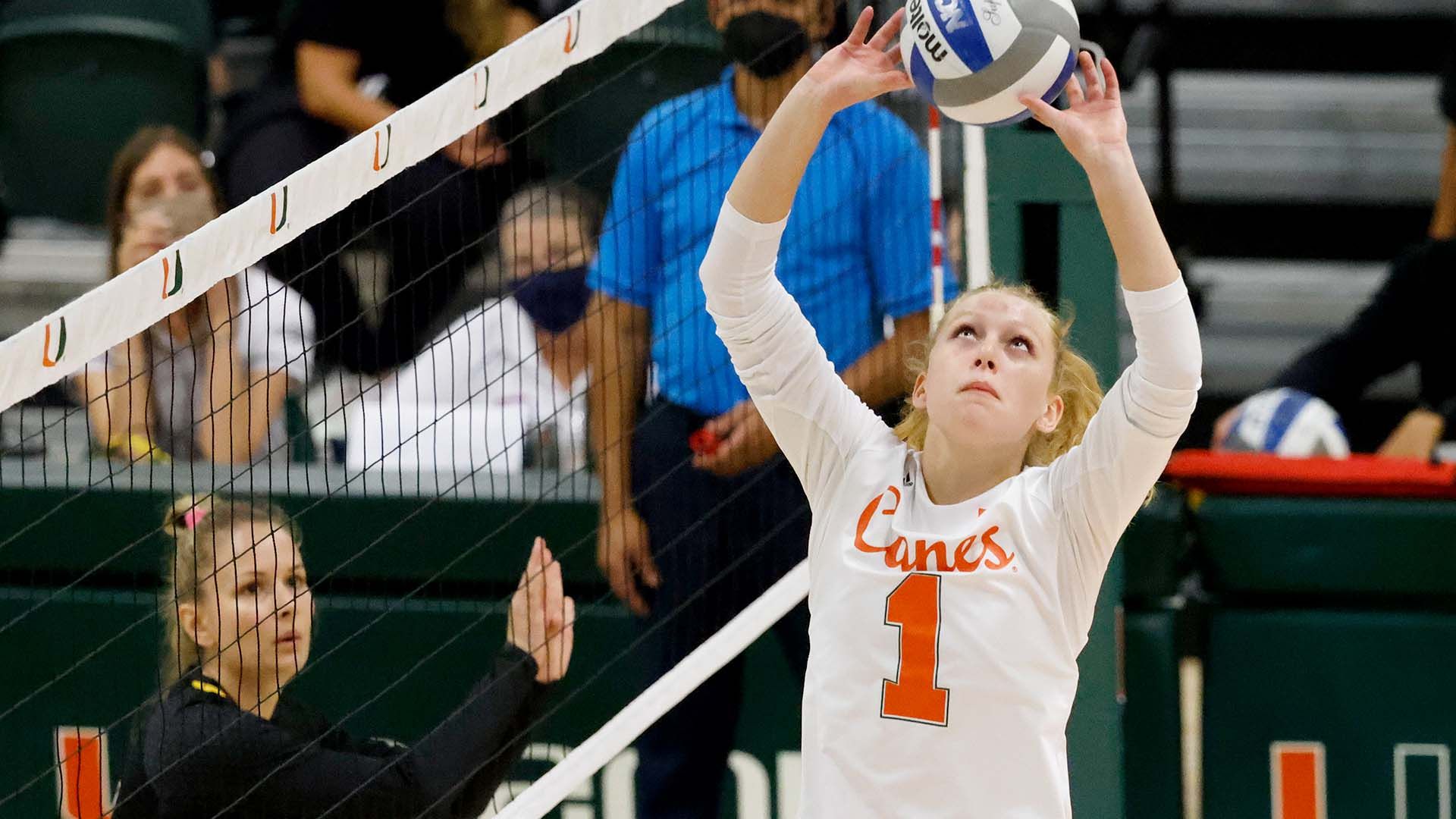 BOCA RATON, Fla. – Junior Savannah Vach served as the catalyst for the University of Miami volleyball team as she recorded her first career triple-double in the opening game of the Sunshine State Classic on Thursday morning on Abessinio Court.

“We knew this weekend would be tough, it has been every year,” said head coach Jose “Keno” Gandara. “Credit to UCF, they were excellent throughout the match, but never more so than the fifth set. Sometimes it’s a flip of a coin to tiebreak, other times a team earns it. They earned it there at the end.

“With two more matches, I’m looking forward to seeing how resilient our group is. That’s our first loss of the season, so there is a question mark to see how we respond. Fragile groups get worse when they’re tested. Resilient groups are unaffected. But occasionally, there are groups who get better when things get hard. That’s our goal and tonight is our first chance to test ourselves in that regard.”

Vach led the way for Miami with 17 kills, 28 assists, and 11 digs. Her triple-double marks the first one since head coach Jose “Keno” Gandara took the helm.

“I’m a bit of a broken record here, but Savannah (Vach) is as good of a player as there is in the country,” Gandara added. “Whatever credit she gets from us or from the outside, she deserves it and more. Any team with Savannah on it has a chance to win, so I’m very grateful that she’s a Cane.”

The match opened in contested fashion as the teams traded runs early before Miami was forced to call its first timeout with UCF up 11-9. After the Knights jumped in front 14-9, UM went on an 8-3 run to tie the game at 17-17. Angela Grieve tallied a kill and two aces, along with a Nyah Anderson kill, to spark a 4-0 Canes run to put them up 21-19 and force a UCF timeout. The Knights closed the opening set out on a 6-2 run for the 25-23 victory.

After UCF took set two, the Hurricanes responded with resilience in set three. Despite a quick 5-0 lead for the Knights, Miami held strong to eventually tie the third set at 14-14 off a 5-0 run that included back-to-back blocks from Janice Leao and Peyman Yardimici and Leao and Anderson.

UCF jumped back in front with a 5-1 run late, but UM answered with three straight points to remain within striking distance at 19-18. Following a Miami timeout with the Knights ahead 23-20, the Canes closed the set out on a 6-1 run to earn the 26-24 set win and make it 2-1 in the match.

Miami jumped in front early 10-6 in the fourth set to force an early UCF timeout. The Hurricanes went on to extend their lead to seven, 17-10. The Knights battled off four straight UM set points before Vach sealed the 25-22 set win to even the match up at two sets aside.

The Knights went on to take the deciding fifth set 15-9.

UM returns to action this evening at 7:30 pm (ET) for its second game of the Sunshine State Classic against host Florida Atlantic.