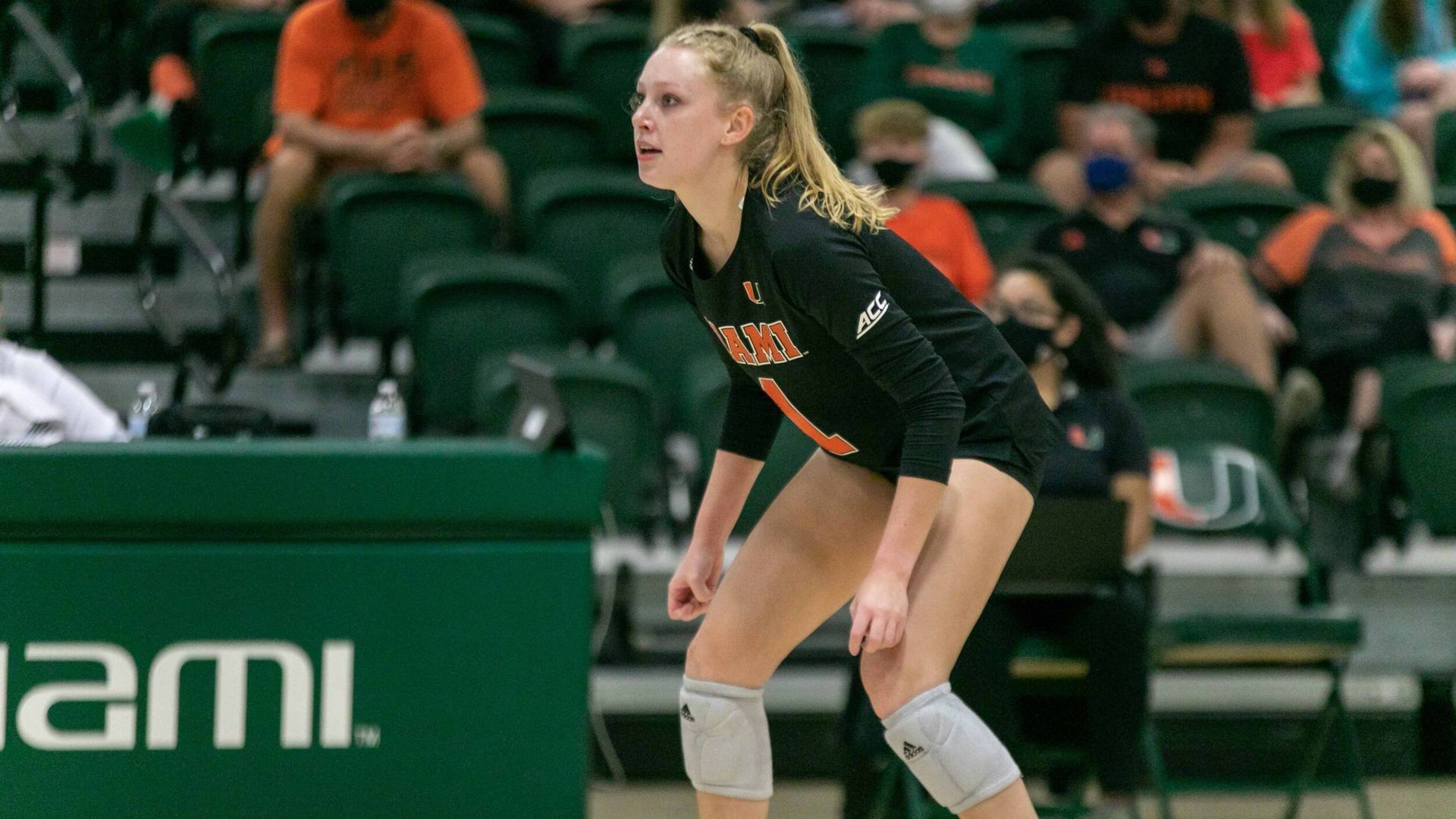 SAN MARCOS, Texas – The University of Miami volleyball team continued it undefeated start to the 2021 campaign Saturday afternoon, notching a 3-0 victory over Alabama in its Bobcat Invitational finale.

The Hurricanes posted seven blocks and held Alabama to a .128 hitting percentage at the Strahan Arena at the University Events Center. Miami (7-0) has now won six of its seven matches in shutout fashion, dropping just one of 22 sets on the year.

“Quick turnarounds can be poison,” Miami head coach Jose “Keno” Gandara said of taking the court under 16 hours after last night’s win over Texas State. “It takes a purposeful, mature effort to not let short rest affect performance. I’ve said it a bunch, but this group has earned the label of mature.”

The Crimson Tide committed five service errors and hit just .212 in set one, while Miami posted marks of two and .281, respectively. Junior outside hitter/middle blocker Kennedy Prince, just two-and-a-half hours from her hometown of Sugar Land, Texas, earned the final point with a kill.

Set two featured a close score for much of the frame, with the teams deadlocked at 16 apiece before the Hurricanes reeled off three straight points to take charge. That trio of points initiated a 9-3 spurt to close the set, as Miami earned a 25-19 win to grab a 2-0 edge in the match.

Miami once again turned in a splendid defensive performance in the final set, limiting Alabama to a mere .064 attack percentage while tallying a whopping seven blocks.

No Hurricane reached double digits in kills, but four had eight-plus. Of the team’s 38 kills, 37 came off assists from junior setter Savannah Vach, who earned Bobcat Invitational MVP recognition.

“We didn’t serve perfectly this weekend, but Savannah Vach was stellar. She was a safeguard for us; we could attack at a high efficiency in spite of not being great,” Gandara said. “She didn’t have her best weekend against USF, so it play like she did in both matches this weekend was awesome, though nothing unexpected. Her tournament MVP honor is well deserved.”

Miami placed two others on the Bobcat Invitational All-Tournament Team, as Prince and junior middle blocker Janice Leao all garnered the distinction.

Prince totaled nine kills and five blocks in the win, while Leao had eight and seven, respectively, of her own. Freshman outside hitter Peyman Yardimci also had five blocks, while Vach had three and redshirt sophomore outside hitter Angels Grieve notched two, giving Miami five players with multiple blocks.

Up next for the Hurricanes is a trip to Boca Raton, Fla., for the Sunshine State Classic, during which they will play three matches in two days, starting Sept. 16 at 10 a.m. versus UCF.