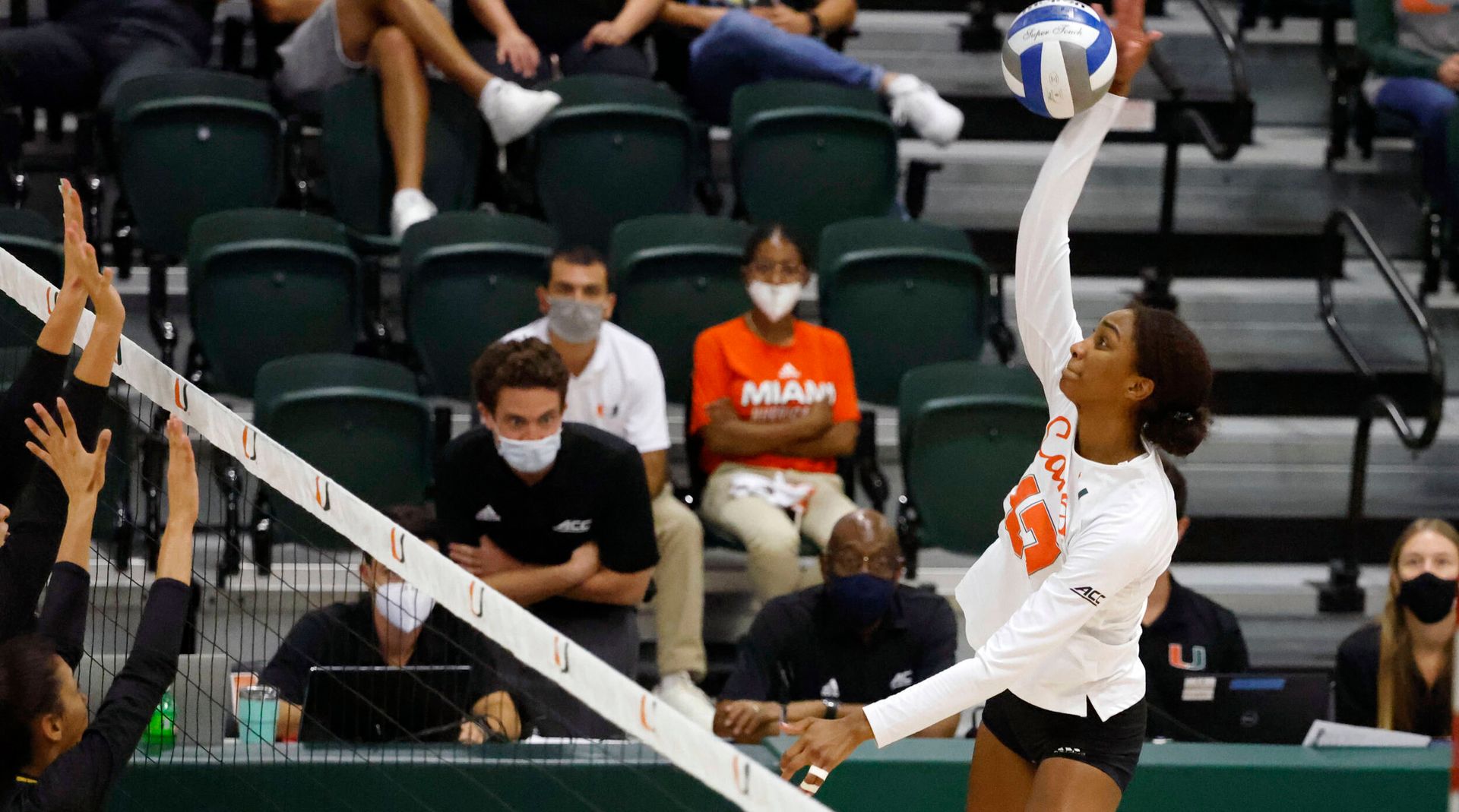 CORAL GABLES, Fla. – The University of Miami volleyball team (3-0) carried its winning ways into the Knight Sports Complex on Sunday when it defeated the UMBC Retrievers (0-4) in three straight sets. The Canes have shutout all three opponents to open the 2021 season, an occurrence that has not happened since 2014.

“This was a really good way to end the weekend,” head coach Jose “Keno” Gandara said. “It felt like a professional performance for all three matches. We learned a lot about what we can do, what needs work and, ultimately, that we can be pretty good.

The Miami offense was firing on all cylinders Sunday, posting a season-best .370 hitting percentage. Redshirt sophomore Angela Grieve paced the Canes in kills, finishing the afternoon with 12 for her second double-digit effort of the season.

Five different Canes hit better than .400 in the match, including an .833 hitting performance from graduate student Aristea Tontai. Both junior Savannah Vach and freshman Alanys Viera were vital members of the Canes’ offense against UMBC, each tallying double-digit assists with 25 and 13, respectively.

“In particular, the serving was excellent against UMBC,” Gandara said. “That’s an NCAA tournament team that we put a ton of pressure on serving, without giving away points on excessive serving errors. Savannah Vach had maybe the most dominant serving performance I’ve ever seen in my time here as head coach. Prissy Hernández and Peyman Yardimci were great back there as well. I’m already looking forward to getting back into training this week.”

The Canes were extremely effective on the service, recording 12 service aces to UMBC’s one. Vach accounted for five of Miami’s aces, while freshman Peyman Yardimci tallied four of her own.

Miami put on a dominant performance in the first set, hitting .423 as a team. The offense was led by Grieve who tallied four of her 12 kills in the first frame. The Canes used an 11-2 run, thanks in part to three service aces, to close out the set, 25-8, in favor of the home team.

It was a balanced effort for the Canes in the second set as both the offense and the defense helped Miami to a 25-17 set victory. Three different Canes recorded a block assist in the set, including three from junior outside hitter Kennedy Prince. On the back row, Miami almost doubled its digs from the first set, posting 18 receptions in the set.

The Canes started the third set on an 11-2 run, highlighted by three kills from Grieve. Miami recorded a match-best 16 kills in the third set and hit an astounding 45.5 percent to clinch the set, 25-11.

Miami hits the road on Friday to take on USF for the first match in a home-and-home series with the Bulls. The match is slated to start at 6 p.m. in Tampa, Fla.