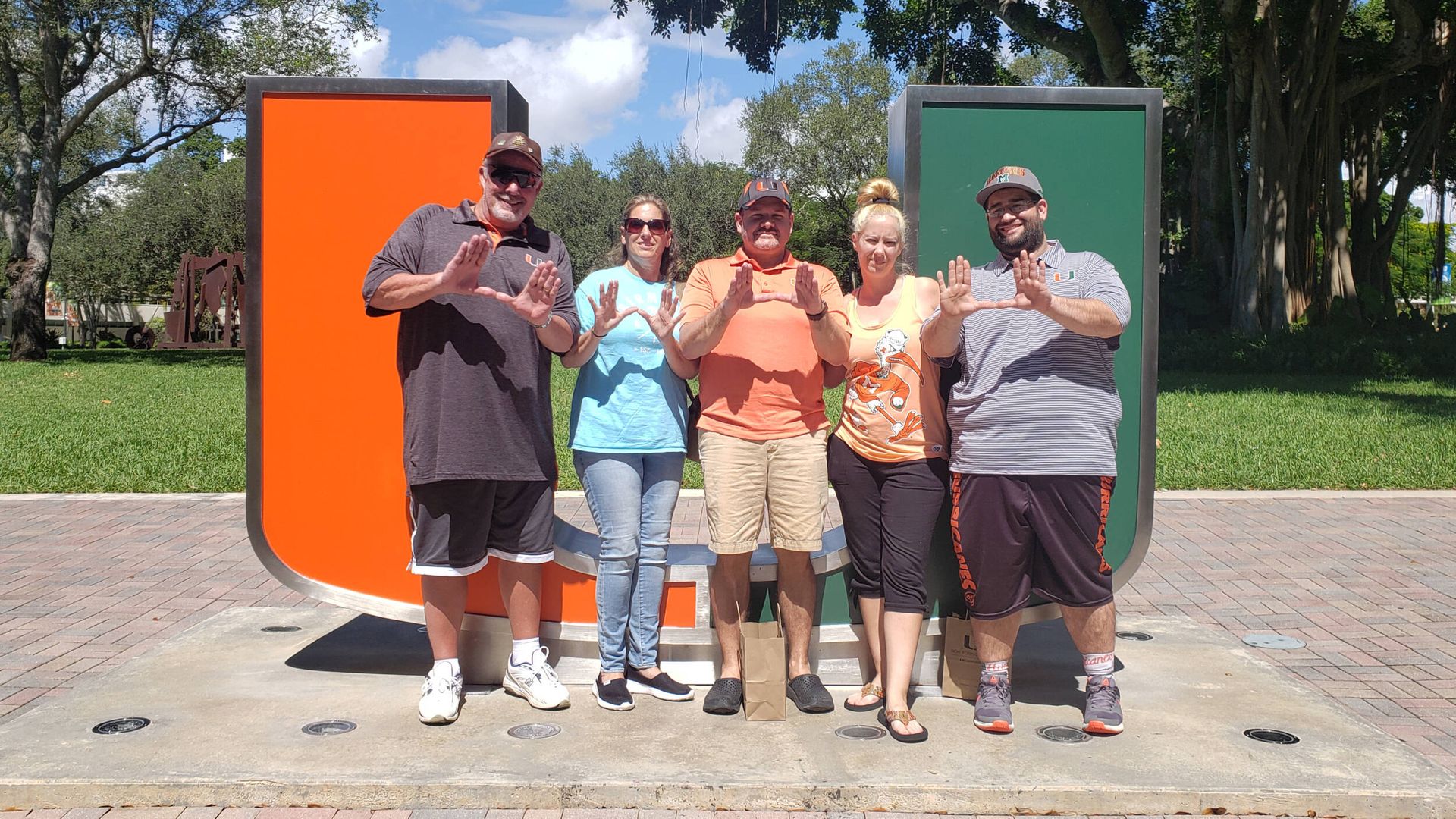 It took ending a vacation for Travis Beach to realize what passion for The U really looked like.

In 1992, with the Hurricanes playing Alabama for the chance at a second straight national championship, Scott Beach – Travis’ father – prematurely ended their vacation to Davenport, Iowa after a disappointing loss.

The Beach Family had to trek back down to Birmingham, Alabama, where they lived.

“That made it much worse,” Beach said with a laugh.

The elder Beach served in Broward County as a police deputy, and upon his retirement, the family relocated to Alabama when Travis was around four years old.

“It’s funny, for me, seeing how my dad got, I wanted him to be happy, so naturally I became a Miami fan along with him,” Beach said. “My sister, on the other hand, started rooting for the Florida Gators.”

Beach, who now lives in Mobile, Alabama, is a season ticket holder, and typically attends three or four home games per year, as well as road games. Some of his favorite memories include watching Devin Hester in the 2004 Peach Bowl and watching Malik Rosier toss the winning touchdown pass to Darrell Langham in Tallahassee in 2017.

“The games I can’t make, I find other fans that don’t have the money to buy tickets but want to go, and I give them my tickets to make sure the seats are being filled,” Beach said. ”Anytime Miami plays anywhere close in driving distance of here, we’re at the games.”

Oftentimes, the Beach contingent – including Travis’ mom, Trina, and wife, Jessica – attend games together as a group. The family passion for the Hurricanes has extended to an adopted brother named Jeremy Stevenson, who started living with Beach Family three years ago. Jeremy has become a part of the family, and now, Beach, his father and Jeremy share the same tattoo.

The word “United”, with the ‘U’ in the shape of the iconic school logo.

“We love the Hurricanes,” Beach said. “They mean everything to us.”

It was spending time with his own father as a kid at the Orange Bowl that put the wheels in motion for Derek Brous.

“When I was younger, I always said that if I had a son, it’s how I’d want my life to be,” Brous said. “The tailgating was always fun. Going with my father, spending that time with him, talking sports with him…it was special.”

Now, Brous shares his lifelong passion for the Hurricanes with his 13-year-old son, Ethan.

“He is as diehard of a Hurricanes fan as you can get at that age,” Brous said. “To go to the games, travel to away games, get to interact with players…he looks forward to that. When I see the smile on my son’s face, that’s what life is all about.”

Brous grew up in the Fort Lauderdale area and now lives in Lakeland, Fla., where there are plenty of early mornings before kickoff at Hard Rock Stadium.

“We make the trip every home game,” Brous said. “We wake up early and hit the road. If we get there early enough to tailgate with our friends, that’s what we do.”

While tailgating can be hit or miss based on kickoff time, the Brous crew always makes the Hurricanes Walk.

“The excitement for my son is something else – giving a high five to one of the players that walk by, or getting a fist bump from Manny Diaz or Mark Richt a few years ago…I remember doing things like that,” he said.

One of the most memorable moments for Brous and his son?

The time his wife scheduled a birthday party for Ethan in 2017 without checking the football schedule, where a crucial late-season matchup with Virginia Tech loomed.

“We left our house in Lakeland at 4:45 p.m. and sat down in our seats in time for kickoff,” Brous said with a laugh.

Now, Ethan reminds his father every day of the countdown clock to Alabama in Atlanta.

“Having the joy of my son experience the same things I did when I was a kid makes it worth it.”

Thanks largely to the University of Miami decorations that populate her classroom walls, Ania Fernandez gets asked the question all the time.

“A lot of the kids in 11th grade who are thinking about college, they ask, ‘How was it? What was it like?’”

For Fernandez, who graduated from Miami in 1990, the answer is simple:

Before arriving in Coral Gables for school, Fernandez graduated from Miami High, where most of her friends were planning on attending UM. Fernandez, who was granted a scholarship, joined the Band of the Hour and never looked back.

At first, she was in percussion before being motivated to join the color guard.

It was during her time in the school band where she first met Raymond Bade, who was in the tuba section. Fast forward more than 30 years later, and the two reconnected through a Band of the Hour reunion a few years ago.

“He was living in Colorado at the time,” Fernandez said. “We were chit-chatting back on Facebook back and forth. I had never been able to go to one of those reunions because I was so busy with work. But that year, it seemed like everyone who graduated from my year was going to go.”

She’s happy she did. Fernandez and Bade were married in December 2019.

“For Christmas, I thought, we’re such UM fans, I’m going to get him season tickets,” she said.

After missing out on the 2020 season due to the pandemic, the duo plans to attend their first games together this fall. Both Fernandez and Bade got matching ‘U’ tattoos on their wrists to commemorate the place that brought them together.

“It was the best times of my life when I was there, some of the best years of my life,” she said. “I loved the people, the teachers, all the experiences I was able to enjoy.

“The fact that we were able to reconnect and we share this passion for the school, it’s really meant the world to us.”