CORAL GABLES, Fla. – Born to be a golfer, John Koskinen may not have witnessed his mother’s club championship in 1979, but he was certainly a part of it.

Seven-months pregnant Lucille Koskinen lifted the trophy at L’Anse Golf Club and it did not take long for her soon-to-be-born son to want to follow in his family’s footsteps.

Born and raised in Baraga, Mich., along the shore of L’Anse Bay on the edge of Lake Superior, the golf season was short due to the extended snow covered winters.

A sport enthusiast, Koskinen spent his winters playing hockey, a game he still loves to this day, and in high school was the football team’s starting quarterback. For several years, he dabbled in baseball and throughout the summer would compete in beach volleyball.

However, despite all of the success in a plethora of sports, it always came back to his first love.

“My mom took a picture of me when I was three years old hitting golf balls outside our house in big boots, a winter coat and huge gloves in very early spring,” Koskinen recalled. “It showed me I had a love for the game that was deeply rooted right from the beginning.” 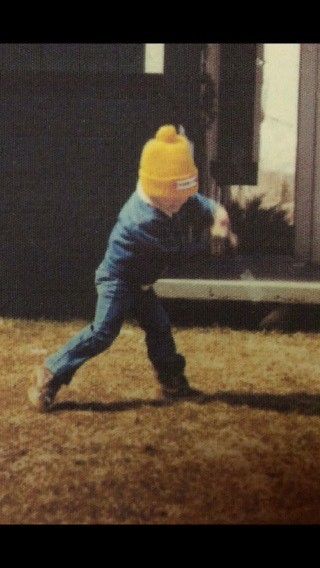 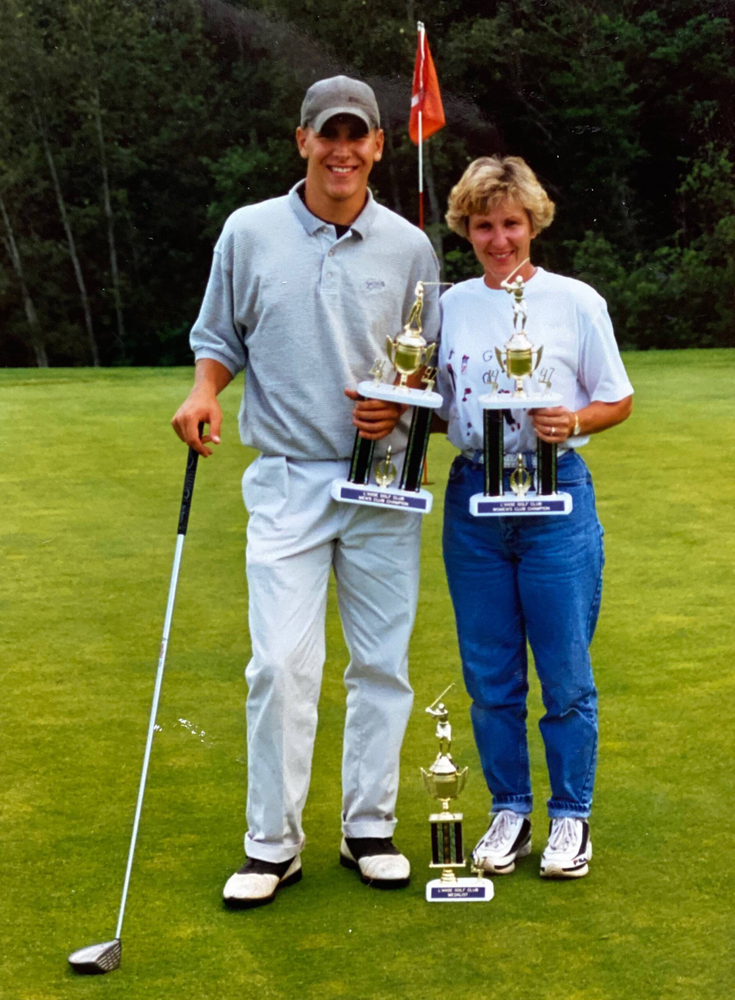 John and his mother Lucille Koskinen after they both won their club championship.

A standout player locally, Koskinen found motivation in his older brother, Jimmer, trying to reach his level of success.

“My entire family plays golf and my mom and brother play very well and both were club champions several times,” Koskinen said. “My goal when I was little was always to someday beat my brother. I’m very grateful I had something to ‘chase.’ That always gave me the motivation to get my butt out to practice.”

Not considering himself an elite player nationally, he continued to practice day in and day out and as a senior in high school, his game reached new heights.

Koskinen dominated the high school landscape winning every event he competed in as a senior and he knew he was ready to take the next step.

Staying within his home state, Koskinen was introduced to the former men’s golf coach at Michigan State, Bruce Fossum, by his older cousin Jenn Brody, a former Spartan golfer.

“If it weren’t for that introduction, I don’t believe I would have been a Spartan,” Koskinen said. “I will forever be grateful for that.

“I loved my time as a Spartan,” Koskinen continued. “It was not all puppies and rainbows, but it taught me a lot and made me better.”

In his first-year at Michigan State, Koskinen made the decision to redshirt as a freshman.

The very next year, he experienced his worst campaign as a golfer. Looking back. Koskinen wishes he would not have taken the 1998-99 season off.

“I completely lost all confidence in my game and could not play the way I had done my whole life,” Koskinen said. “I was literally hitting it sideways. My coach [Mark Hankins] told me at the end of the year that he was cutting me from the team.

“However, when I was leaving the meeting, he told me that if I got my game back over the summer and showed that I improved drastically, he would allow me to come back on the team,” Koskinen continued. “I left, went home and got to work. I practiced on my home course where I always felt comfortable and slowly chipped away at my demons.”

A month after returning to Baraga, he qualified for the state amateur championship, advancing through the first two rounds of stroke play qualifications and headed to match play.

Koskinen began to build some confidence after he won his first two matches, while the third and fourth matchups were set to be against a pair of his Spartan teammates.

He won both and reached the championship match, a battle that came down to the final hole.

“My opponent made his shot from roughly 100 yards out on the last hole to beat me,” Koskinen explained. “So many people consoled me for the dramatic ending. However, deep down I was celebrating something else. I knew I had just earned my spot back on to the team. My coach called me later that week and told me he was proud of my turnaround and that he wanted me back on the team that fall. In the fall of 2001, I ended up being a captain of the team, playing number one for most of the year and had the best year of my career. It is truly one of the things I am proudest of in golf.” 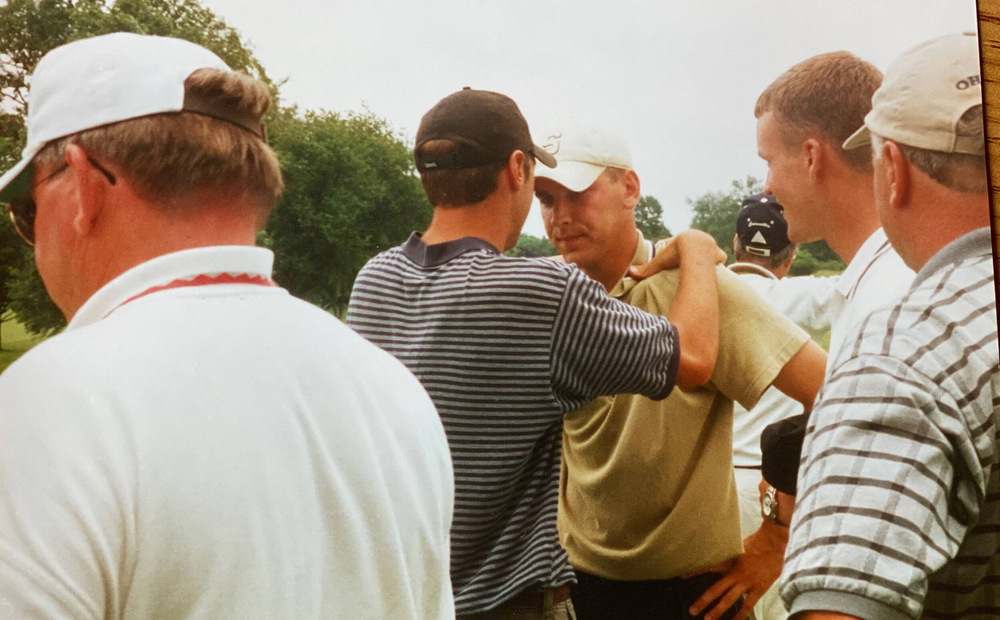 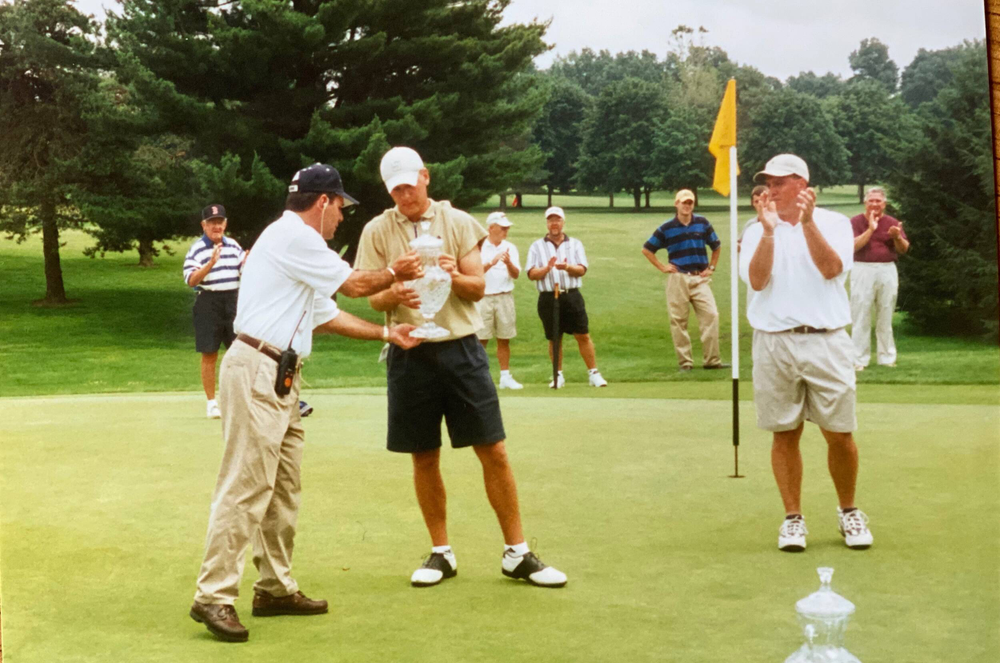 Overall, Koskinen was a three-year letter winner from 2001-03, and in 2001 he had the lowest stroke average on the team with a 74.19 and was named the team’s most improved player. He earned All-Big Ten honors in 2002.

Koskinen also shined off the course while majoring in kinesiology. He was a four-time winner of the Tom Anderson Award, awarded to the top student-athlete on the men’s golf team, a three-time Academic All-Big Ten selection and a two-time NGCA Scholar-Athlete recipient.

After college, he turned away from a possible professional career and worked at a golf course in Michigan for a while, before making the move to Florida in 2004. Relocating to Tampa, Fla., he got a job caddying at an exclusive club, called Old Memorial.

“After working there for two years and playing a lot of money games on the course, I was starting to get my competitive bug back,” Koskinen said. “With the help of my parents and two members at Old Memorial to sponsor me, I decided to head out and give it a shot.

“So, in 2005, I decided to start playing as a professional. In my first event, I was leading after two rounds, but then fumbled the last round to finish somewhere in the top 10,” Koskinen continued. “In 2006, I had the best golfing year of my life. I had a scoring average of just over 69 strokes per round, but only won once. People do not realize how competitive professional golf is.”

His professional journey was highlighted by two appearances in the U.S. Open, in 2006 at Winged Foot, and 2007 at Oakmont. He also competed on the Hooters Tour summer and winter series, finishing second on the 2006 winter series money list. 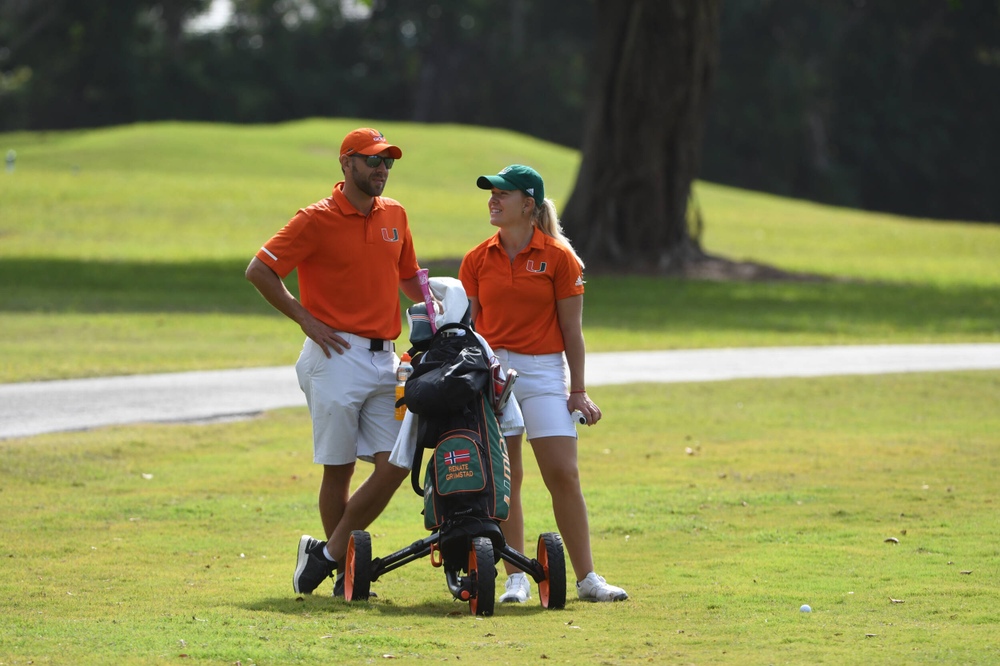 “By 2009, I was starting to get a bit burned out again and looked for other career options,” Koskinen said. “I happened to call one of my former teammates at Michigan State one day and he said the men’s coach at Barry was looking for an assistant coach. The idea sounded intriguing so I decided to give him a call.”

Little did Koskinen know, the opportunity would blossom into a lifelong friendship with the head coach of Barry’s women’s golf program in 2009.

Without an assistant coach on her staff her first four years, Patti Rizzo was informed she could share the soon to be hired men’s assistant coach and was ecstatic for the help that individual could bring to the table.

Making a strong impression in both the initial meeting and during his first year on the job, when Rizzo received the opportunity to return to the University of Miami as a head coach, she did not hesitate to see if Koskinen would be willing to join. Seven NCAA regional appearances and a plethora of memories later, the duo is prepping for their 11th spring leading the Hurricanes.

Over the past 12 years coaching both at Barry and Miami, Koskinen utilizes his experiences as a player to help connect with the next generation of golfers.

“Having lived experiences—both good and horrific—is what allows me to relate to the players,” Koskinen said. “I don’t think there is anything one of our players could ask me about that I have not gone through myself. I’ve played against the best players in the world on the highest stage and I have gone through the worst of slumps that literally brought me to my knees. I believe it’s because I’ve seen and lived both ends of the spectrum that allows me to be a relatable coach.”