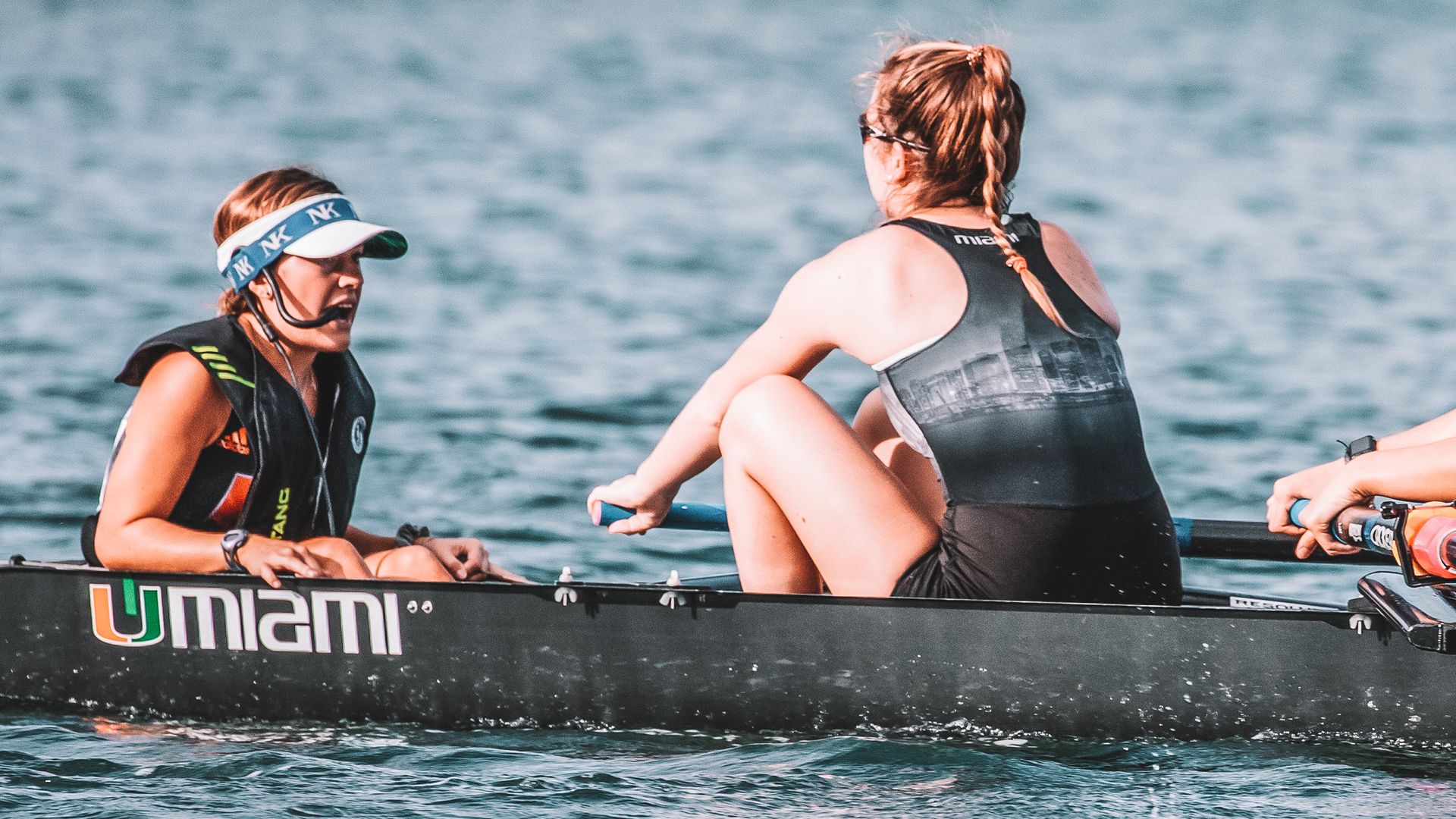 Steering the Canes to Victory

The University of Miami rowing team is composed of 62 student-athletes, but only 53 are true “rowers.” The other nine hold a unique position on the team; they are the Canes’ coxswains.

A role somewhat unknown to those outside the rowing community, coxswains are most often seen lying or sitting in the front of a racing shell. Despite outward appearances, their jobs encompass so much more than solely lying in a boat during a race.

In a nutshell, coxswains (COX-inz) serve as “mini-coaches” on the water, according to Miami junior Maren Stickley.

“I think of [the coxswain] as kind of a middleman between the rower and the coaches,” Stickley said. “Oftentimes, the coxswains will get practice plans at the beginning of practice so, if the coach is doing something else or talking to another coach on the water, I can keep everything on track.” 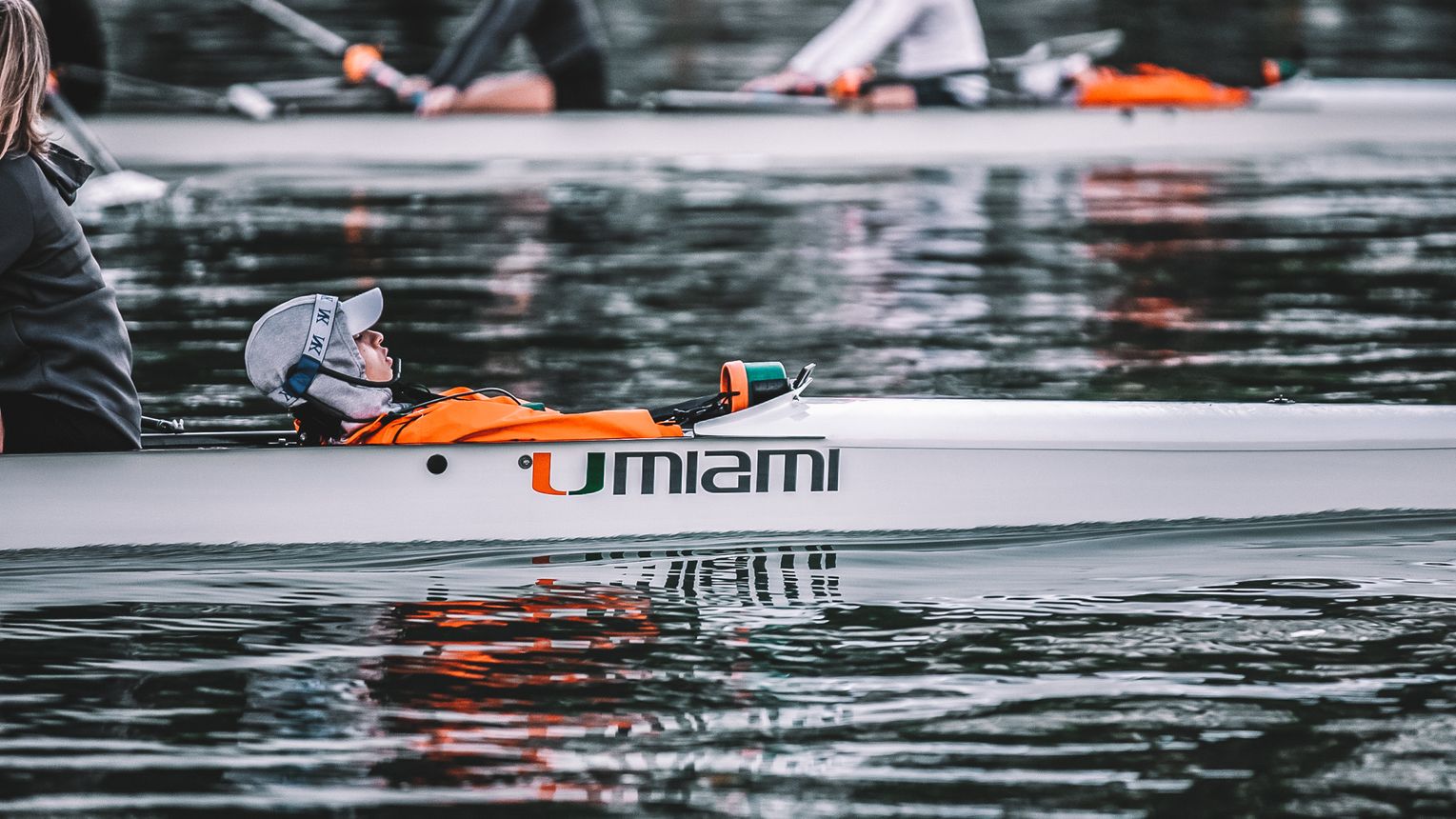 Aside from serving as a mini-coach, the coxswains have three main responsibilities when on the water: safety, boat control and encouragement.

“I would say the primary responsibility is safety, which includes steering and communicating with other boats on the water,” junior coxswain Abby Schwenger said.

From knowing where you are going to recognizing what other boats are doing around you, a coxswain must be cognizant of all factors that may impact the safety of the boat and the rowers in it.

Along with safety comes boat control. This refers not only to the actual movement of the boat through steering, but also organizing the rowers and correcting technique to keep the boat moving efficiently.

“We work to keep all of the rowers unified and have to be able to give individual rowers specific feedback to improve their technique that will then improve the unity of the boat,” Schwenger said.

The final core responsibility of a coxswain is encouragement. The coxswains serve as motivators for the boat, knowing what to say and how to say it to pull the best physical response from the rowers. 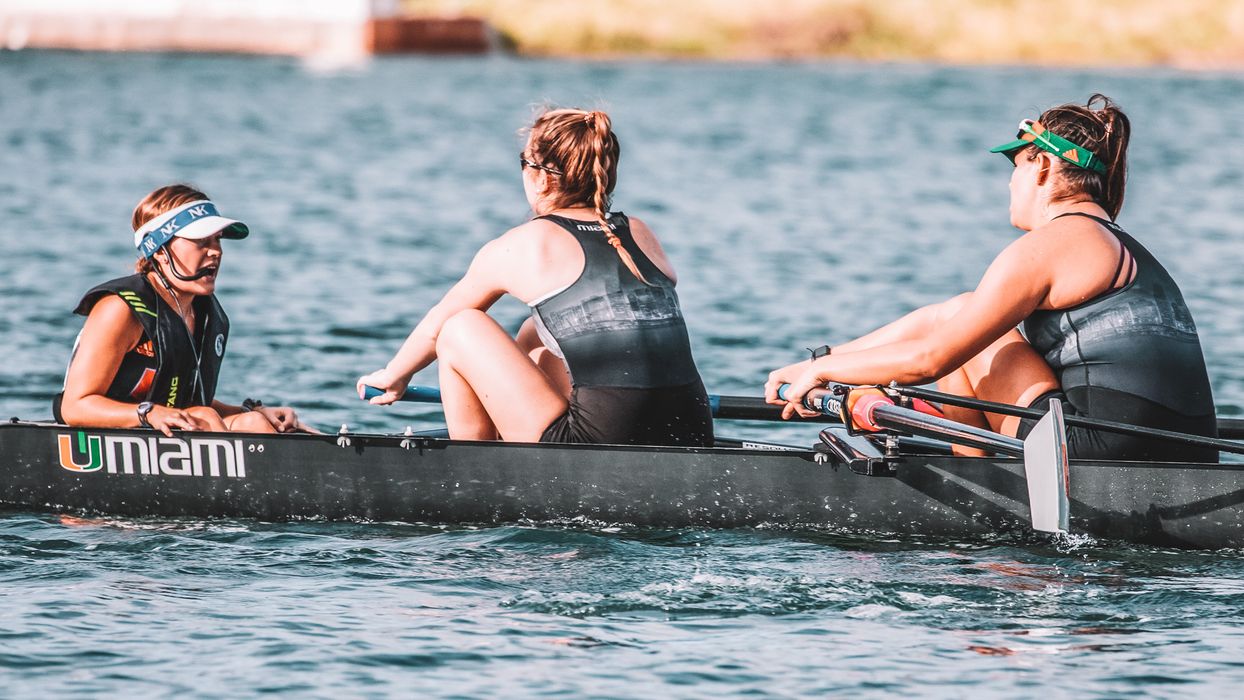 There is an underlying trust between the rowers, who are physically driving the boat forward, and the coxswains, who are steering the boat and motivating the team. That trust is established not only on the water during practice, but also during land training.

“Our coaches are awesome about allowing the coxswains to be a part of a lot of the workouts and to be in the weight room, so that we can build credibility with the rowers,” Stickley explains. “I think that is a huge part in the respect that is built up between the rowers and coxswains. The rowers can see the coxswains not just telling them what to do, but also putting work in to physically know how they’re feeling.”

The coxswains participate in every run and lift alongside the rowers. When the rowers are working on the ergometers, the coxswains are often leading the drills and getting to know the individual rowers.

It is the latter part, developing familiarity with each rower on the team, that is vital to helping a coxswain succeed, as she is not always with the same group each time out on the water. By paying attention to each individual’s rowing style, the coxswains are able to reach a level of comfort with the boat no matter who is rowing with them that day.

“Whatever boat we are in for the day, our job is to make that boat faster and the pairings of coxswains and rowers come however they come, and the coaches decide that,” Schwenger said. “It’s about knowing everybody and getting in the boat with an attitude that that boat is going to be better by the end of the day.”

A certain level of leadership is required of the coxswains in order to work with a team of over 60 student-athletes.

Do they have the respect of their teammates? Do they walk into a room and command a presence?

Those are the types of questions the coaching staff asks to identify a good coxswain. In addition to innate leadership qualities, assistant coach Claire Frenkel says the coaches also look at the coachability of a coxswain.

“They are a direct reflection of the coaches in the boat,” Frenkel said. “Especially during races, they have the most responsibility of any of the people within the boat.”

All of the duties of a coxswain are amplified come race day. 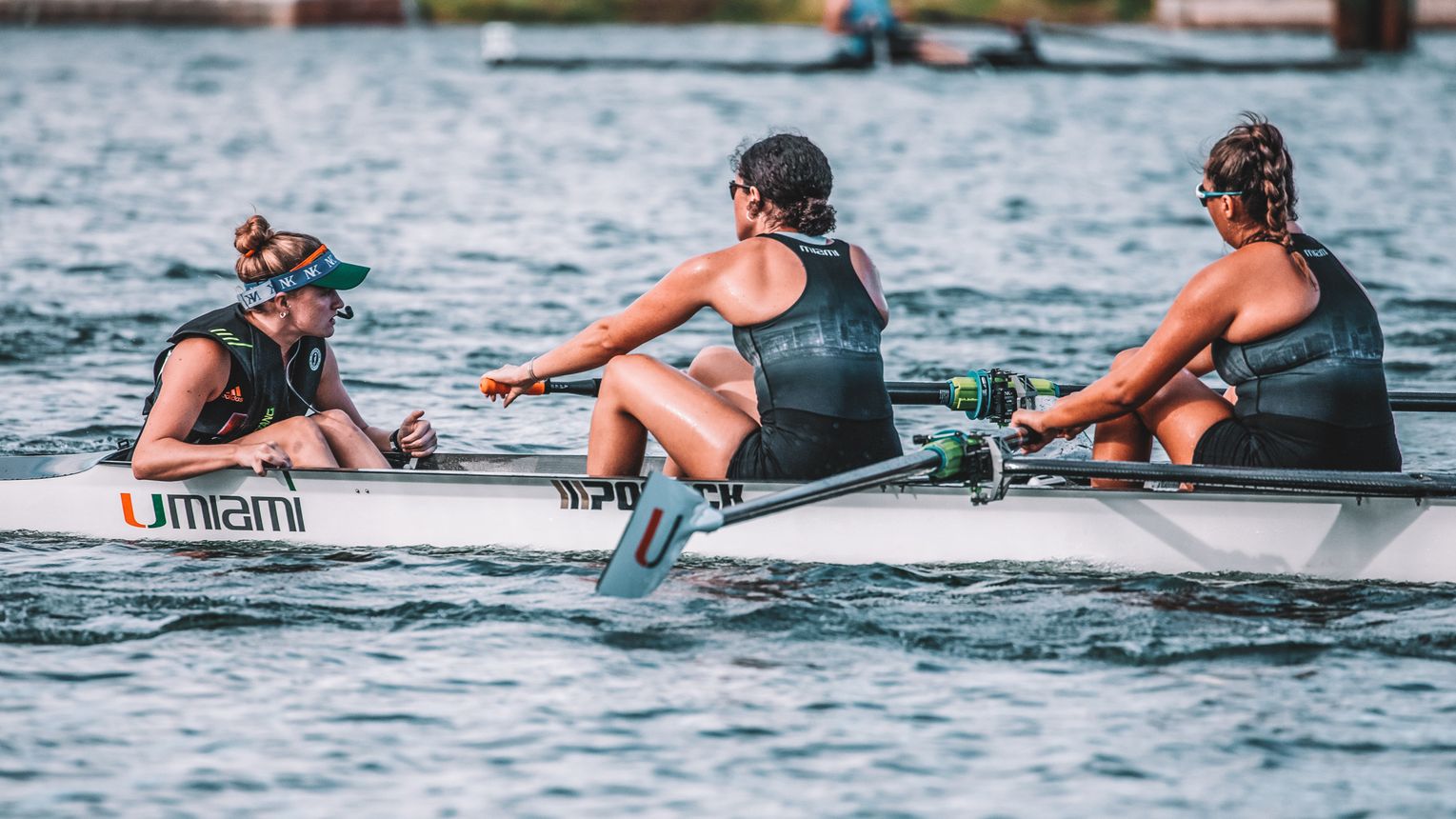 In the hours leading up to a race, the coxswains keep to a strict timeline to make sure the rowers are feeling the least amount of stress possible. From meeting with the racing officials to weighing in the boats to going over the race plans with the coaches, organization is key for the coxswains as they work to get their boats to the starting line in a timely, efficient manner.

Sometimes race days can be stressful, but the coaches remind the coxswains they train for this daily.

“We just want to make sure they are in a good headspace,” Frenkel said. “We just encourage them to rely on what they’ve done during the hours and hours of practice. It’s kind of a pep talk for them and then they give the pep talk for the rowers.”

During the actual race, along with encouraging the rowers, a coxswain is in charge of steering the boat in the right direction. It begins with “getting your point,” or making sure the bow of the boat is pointed to where they want to go.

As the race is occurring, the coxswain might occasionally move the rudder with a slight push or pull of a string to change the direction, but this is only when it as an absolute necessity.

“If someone starts coming into your lane, then sometimes you do need to adjust so that you don’t hit oars with them,” Stickley said. “But we try to touch the rudder as little as possible.” 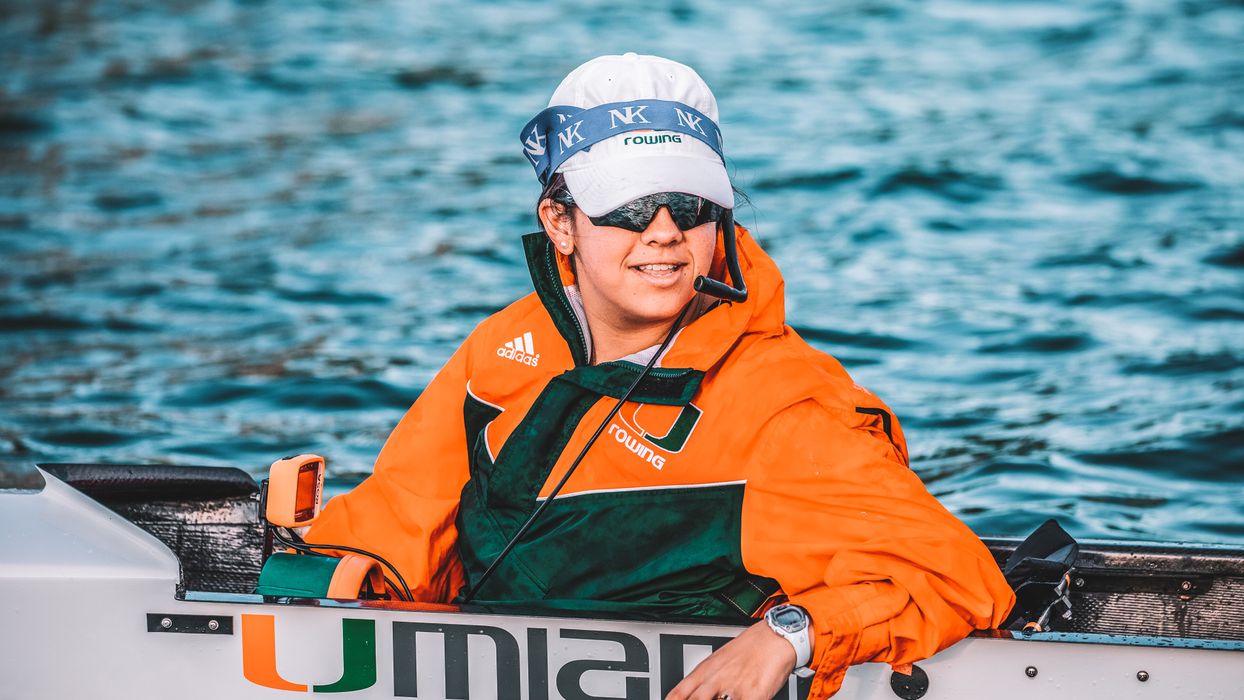 While they are not physically rowing, the coxswains’ roles in the boats are vital to the success of the team. Thus, it is important to see growth in the coxswains’ abilities as they continue to lead the team.

The development of a coxswain is often not as apparent as that of a rower, but instead more of a gradual change. It shows in her rapport with the rowers, in her tone as she communicates with the team and her work ethic at practice.

But for those coxswains that put in the work, the rewards are endless.

“Getting to the end of the season and feeling like we got to a place that we never saw ourselves at the beginning of the season is definitely the most rewarding part,” Schwenger said.

Stickley is of a similar mind, describing the most rewarding part of being a coxswain as being able to come off the water and know that they “left it all on the water in their best performance, period.” 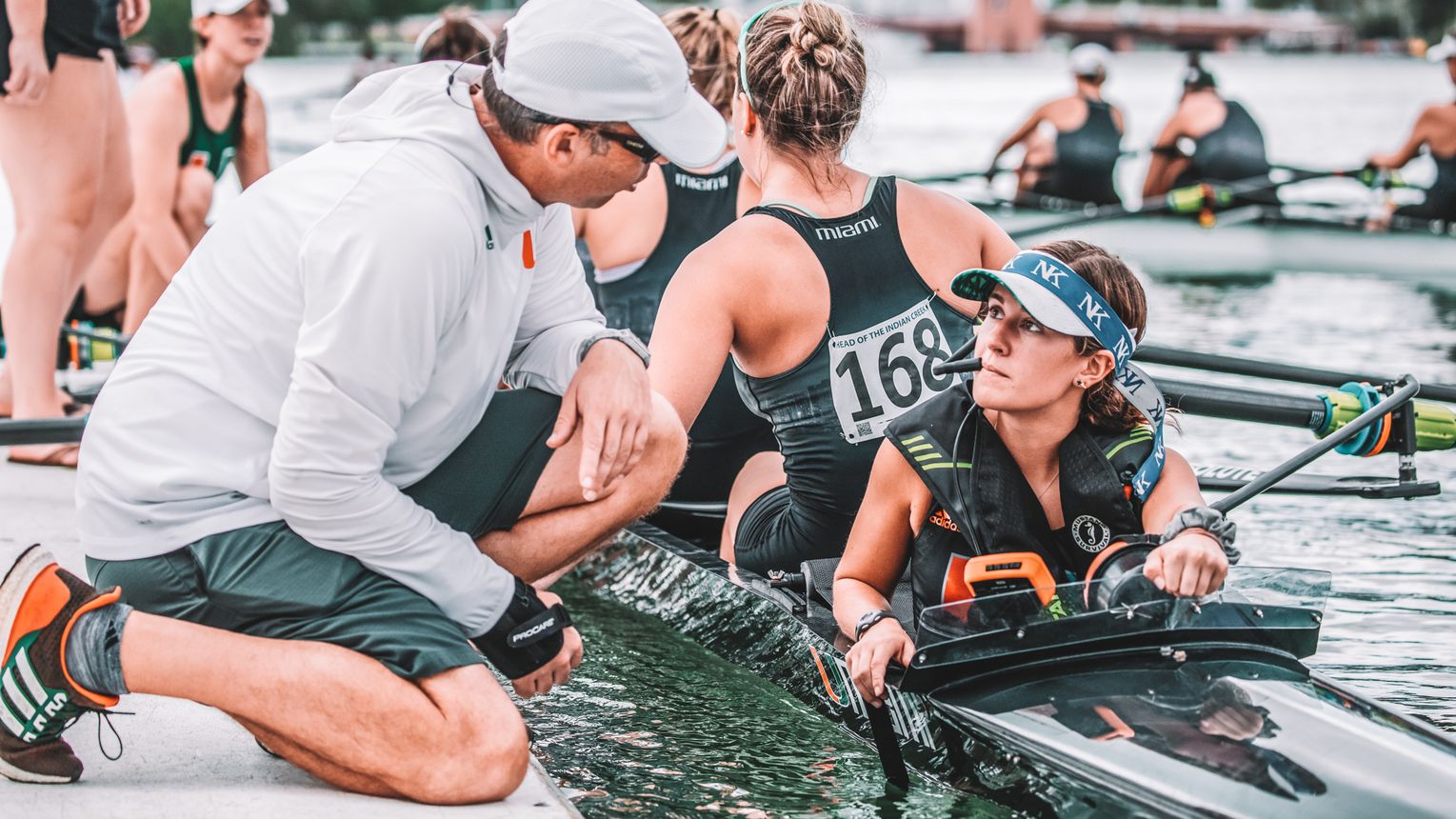 Even better than the rowing-related rewards are the skills coxswains learn that help them in daily life.

“The number one thing I have learned is how to stay poised under pressure or when you’re stressed out or when something goes wrong,” Stickley said. “That has translated to my life in school and just in general with staying calm under pressure or during stressful times, which obviously everyone is facing right now with the whole pandemic.”

A former coxswain herself, Frenkel knows just how rewarding the role can be.

“For me, it gave me the empowerment to coach,” Frenkel said. “For four years, I sat in front of a group of women and led them to a lot of wins. If I can do that for a certain group of women, why can’t I do that for an entire team? It definitely lit a fire for me to start coaching.”

While they may not truly be the embodiment of the term “rower,” coxswains are an integral part of the Miami team, propelling the program forward through their leadership and dedication.