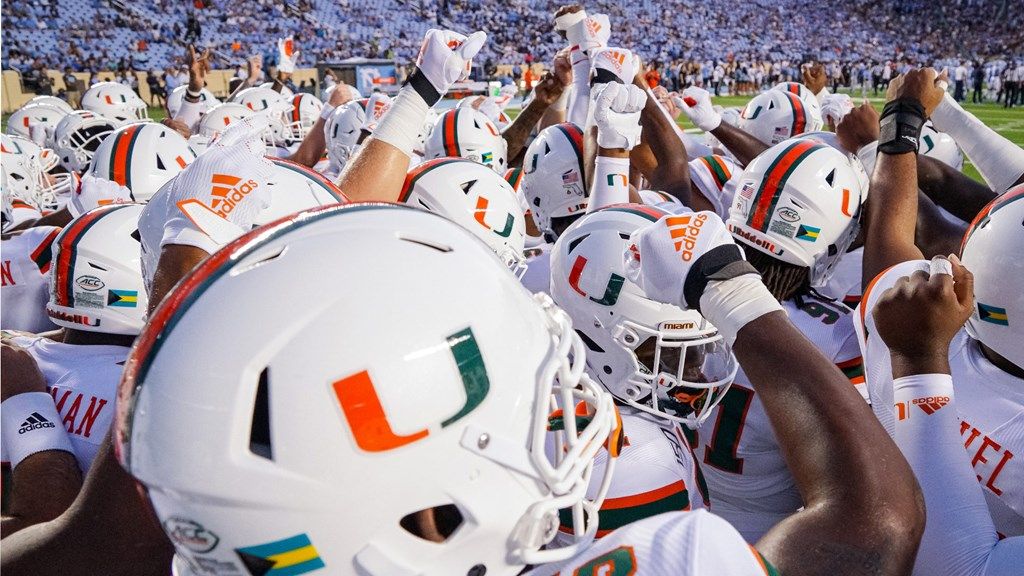 And then, as shelter-in-place orders were extended and the reality set in for many of Miami’s student-athletes that the fight against COVID-19 was going to continue impacting their lives a bit longer than they may have expected, Goldstein found himself getting busier and busier.

Student-athletes were getting worried and they needed someone to talk to.

“If you’re playing Fortnite every single day…what a blast – for three weeks. After a while, you never want to see that game or Call of Duty again,” said Goldstein, a sports psychologist who joined the Hurricanes athletic department in 2018. “What started happening is, the loss of identity really started hitting around that point, too. I think for all of us – whoever we are – who we are, in our minds, is based a lot in what we do. That’s probably accentuated for a high-level Division I athlete.”

That May happened to be Mental Health Awareness month only helped drive home the importance of their messages.

There have been individual phone and video chats. Online get togethers. The ability for student-athletes to communicate with Goldstein via text message and even some lighthearted programming, with Goldstein hosting an online video chat about the Netflix sensation “Tiger King” that made headlines earlier this year.

Even Miami’s Student-Athlete Advisory Committee has gotten involved, with members reaching out to teammates and friends to make sure they are weathering the current challenges in their lives as best they can.

“I think the athletic department made a conscious effort to promote mental health resources while we were on campus, which I think has translated well into this time while we are away from campus, classes and sport,” said Hurricanes swimmer Sydney Knapp. “We’ve been sent information about the continuing sports psychology availability remotely. I know through SAACH, we have been working to stay in contact with our members about communicating with one another and teammates because it’s awesome to have that interaction, even if it can’t happen in person. And we have been posting different mental health resources through the SAAC social media pages, which I hope people are using and engaging with.”

Some of Goldstein’s biggest allies in helping make sure student-athletes get any of the support they may need, he says, are Miami’s coaches.

Since UM’s campus closed in March after spring break, coaches across the athletic department have worked to stay connected with their players through frequent video chat and phone calls.

And along with organizing regular team and positional meetings during the spring semester, football coach Manny Diaz has spent the better part of the last few days meeting remotely with each of his players individually.

The conversations have given him a chance to not only talk about football with his players, but to gauge how they and their families are doing, see their faces and hear their voices.

“It’s important at all times for our student-athletes to have all those resources. And its significance won’t go away once we all eventually get back together on campus,” Diaz said of the work done by Dr. Goldstein and his colleagues. “But getting us through this time, being there for our players, that’s one of the best duties we can provide them.

“This week, I’ve been in the midst of 50 one-on-one sit-downs with our players, and for sure, one of the questions I want to know is not just ‘How are you?’ but ‘What are your feelings about when we all come back together again? What are you feelings about the first day we come back to practice? What are your feelings playing football with the virus still out there?’ It’s been fantastic to just see the guys, see their smiles and make that connection has been therapeutic for me. I imagine it has been for them, as well.”

As difficult as the past two months have been, Goldstein and the rest of the members of Miami’s Performance, Health and Wellness Department expect there will still be challenges the Hurricanes will face as they start moving forward and potentially return to campus.

Their goal, they say, is to continue to be there, providing guidance in any way they can.

“A lot of this really depends on what happens, but one of the things the coaches I’ve been hearing from are saying, is they’re approaching it by saying ‘Let’s go with the mindset that we’re going to be back. … There’s hope and that affects them emotionally and physiologically,” Goldstein said. “They believe, ‘When I get back, I’m going to get to work out, play sports, do my thing, the thing I have not been able to do.’ And there’s a part of me that really believes when these athletes come back, there’s going to be giddiness and happiness. But we don’t know what some of these student-athletes have been through when they’ve been at home. … I think some kids might have a tough time with adjustment and getting prepared for a new schedule when they come back. … We’re going past our second month of this. It’s been a significant time.

“I think, in general, the kids are going to be very happy to be getting back. But we have to be aware. … We’re going to have a lot of hands doing not just physical-physicals, but emotional physicals to make sure our kids are okay.”