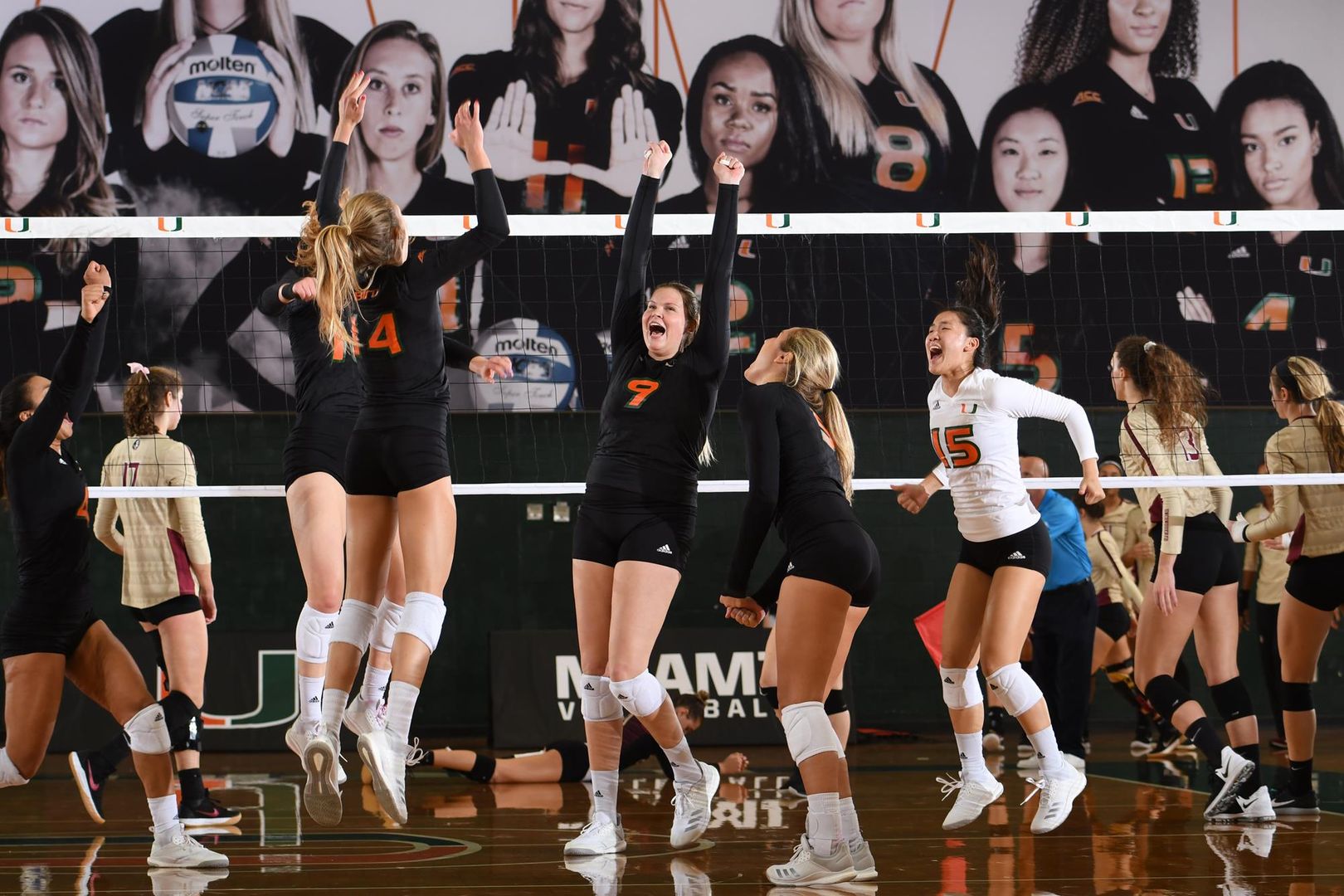 Bridget Wallenberger was perfect on offense for the Canes in the first set, converting all four of her attacks into kills. Freshman Chloe Brown led the Canes with seven kills, while Lukianova put together an impressive offensive effort with a .444 attack percentage, posting five kills.

“What you can’t see from the stands is the work Haley put in to follow tonight’s game plan,” head coach Jose “Keno” Gandara said. “We know the type of setter she is and how she’s able to set her hitters up was great to see from her tonight.”

Despite outhitting the Seminoles in the second, Miami dropped the set, 25-23. Lukianova tallied seven of Miami’s 15 kills in the set and Templeton recorded 14 of her 57 total assists. The Seminoles recorded four blocks and took advantage of five Miami service errors.

The third set saw both teams struggle on offense hitting under .200, and logging 11 kills. Florida State took the 2-1 lead with a 25-22 set win.

The fourth set belonged to the Canes, who jumped out to an early 6-2 lead before the Seminoles called timeout. Miami took control of the set courtesy of a 10-point run where the Noles recorded three attack errors, a Kolby Bird kill, Wallenberger’s three straight kills, an ace by Priscilla Hernandez, a block assist by Kolby Bird and Wallenberger and a Florida State error.

Hernandez finished with a career-high 15 digs and two aces, one of which set up the set point for the Canes in the fourth. Brown recorded her third-career double-double with 12 kills and 12 digs, including the block to send the match into the fifth set, in a 25-18 set win.

“Chloe’s a complete player for us,” Gandara said. “We’ve been challenging her as a defender and she’s continued to make improvements there.”

Miami went to the fifth set for just the second time this season. Despite trailing 12-8, Miami’s resilience paid off taking the next four points to tie the match at 12.

“To see this young group manage that 12-8 deficit in the fifth set and to have the composure to finish the match was very rewarding to see as a coach,” Gandara said.

Miami staved off three match points before Lukianova’s sixth kill of the set won the match, 19-17. Wallenberger recorded two of her seven blocks in final set and finished the match with a season-high 14 kills.

“It’s awesome to get this win because you can’t downplay the rivalry Miami and Florida State has,” Gandara said.