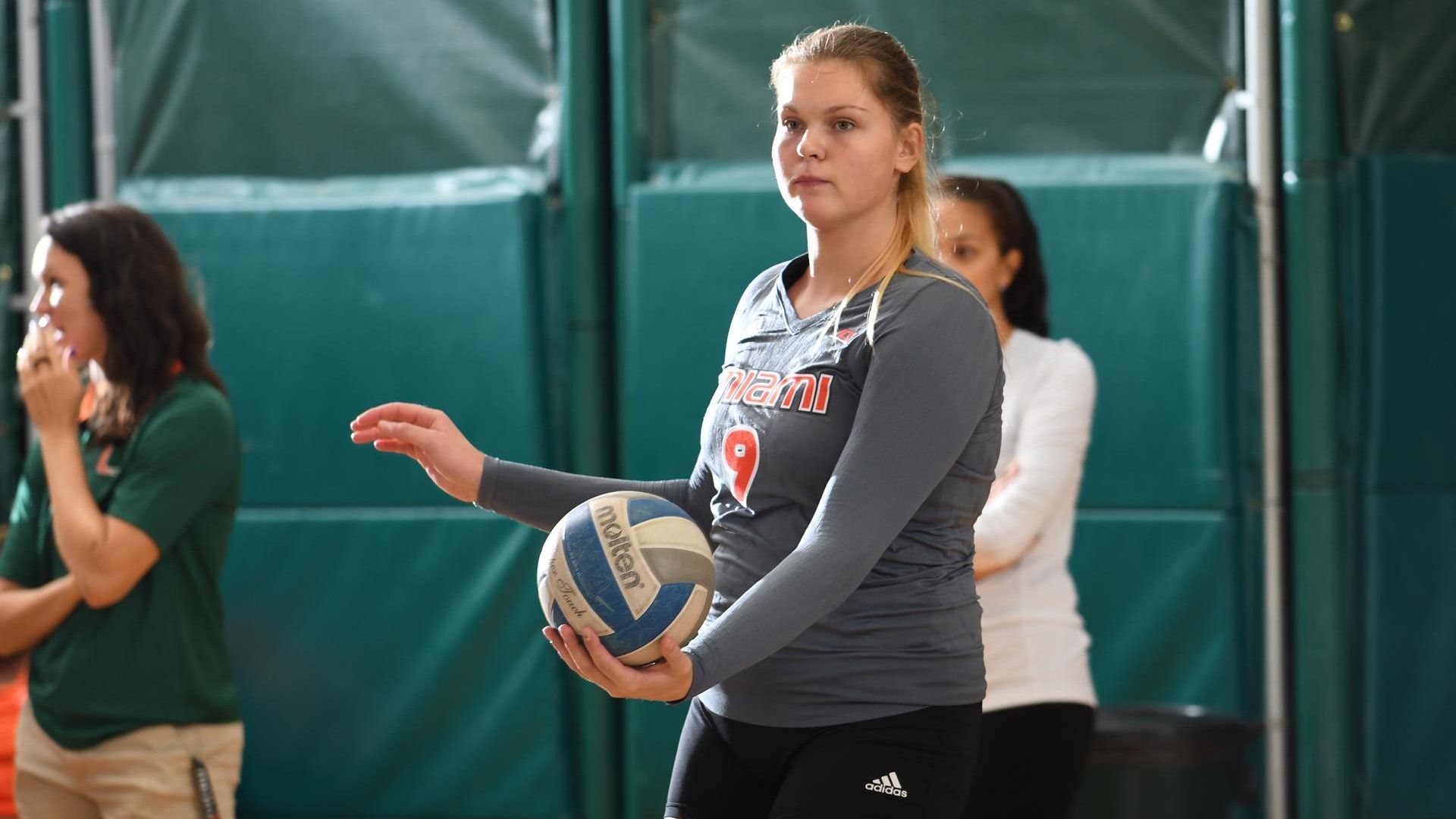 Career-best 17 kills from redshirt freshman outside hitter Elizaveta Lukianova – on a team-best .467 attack percentage – and three more double-digit offensive performances allowed the Hurricanes (18-5, 12-5 ACC) to prevent the ultimate comeback by the Cavaliers (7-21, 3-14 ACC) after going into the locker room with a two-set lead. The Canes finished the match on a 13-2 run for the 25-17, 25-17, 21-25, 25-27, 15-10 victory, which allowed them to improve to 6-1 in five-set contests and to sweep Virginia for fourth straight season.

“I am proud of the way we hung in there and battled back,” Miami head coach Jose “Keno” Gandara said. “I have to give UVA credit, they played well. We had several players contribute and that’s huge, as we are going to need everyone ready moving forward.”

Strantzali was one of the two Canes to pick up a double-double after picking up 12 digs on the defensive end. The other usual double-double suspect, redshirt junior setter Haley Templeton, achieved the feat with a match-high 55 assists and 13 digs. Templeton also tied her career-high of eight kills, which was achieved in Miami’s first 3-2 win over Virginia this season.

Alex Spencer tallied 14 kills and 10 digs to record a double-double for the home team. Sarah Billard and Kelsey Miller led UVA with 15 kills and 21 digs, respectively.

No player on either side of the net could match the defensive efforts by Miami’s senior libero Sylvia Hernandez, who contributed 24 digs.

Miami won the opening two sets in a convincing manner, closing each of them at 25-17. The first set featured runs from both teams, but the Hurricanes had the last word in it, ending the frame on a 15-6 run after Virginia led by one entering mid-set.
The momentum remained on the Canes’ side of the net for the beginning of the second set and they won the opening six points in it. Virginia put together a string of points to come within two at 11-9, but it was all Miami from there on, with the Canes hitting a combined .338 before the break for a total of 35 kills. Meanwhile, UVA was limited to a .115 attack efficiency with 18 kills to show for it.

A 4-0 run by the Cavaliers put the Hurricanes in a role of a chaser for the larger part of set three, but the Canes put together three straight points to tie the score at 19-19 with a block by Strantzali and Pampana. The Cavaliers responded well and finished the set on a 6-2 run to remain in the match.

Composed play from Bird, Pampana and Strantzali allowed Miami to erase three Virginia set points in the fourth set, but Spencer picked up a crucial kill  for 27-25 to take the match to a fifth set. The Hurricanes had their best attacking display namely in the fourth set, hitting .389 for 18 kills, but the Cavaliers did even better, hitting .419 for 21 of their 55 kills in the match.

The Canes had a nightmare start to the decisive sets and trailed 6-2 early on, but a crucial serving sequence by Strantzali led to a 6-0 Miami run – including two service aces – and set up the Canes for the important comeback. The Canes closed out several rally points to break Virginia, which was limited to .000 hitting in the final frame.
Miami completes its Virginia doubleheader against Virginia Tech on Sunday at noon. Then, the Hurricanes head to Georgia Tech and Clemson for the final two matches of the regular season.