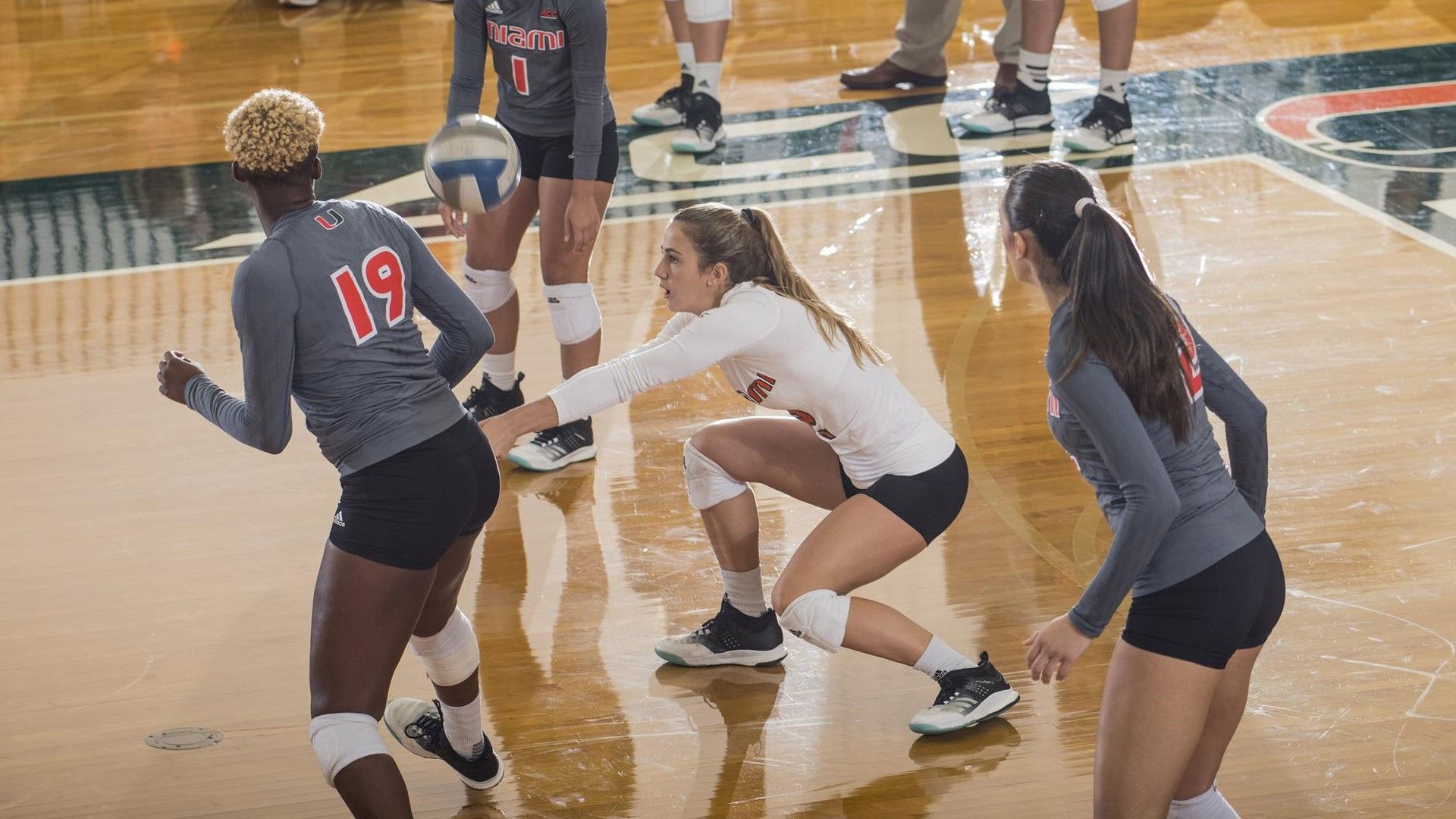 CORAL GABLES, Fla. – The University of Miami volleyball team sent away its seniors in the best way possible Sunday after coming back from behind to defeat Syracuse 3-1 in a crucial Atlantic Coast Conference fixture at the James L. Knight Sports Complex.

The Hurricanes (17-5, 11-5 ACC) fell to the Orange (17-12, 9-7) in the first set, but would not allow something to spoil the special day of Alyssa Basdavanos, Sylvia Hernandez, Brooke McDermott, Sakile Simmons and Olga Strantzali. They capitalized on every bit of momentum that came their way to grab an important ACC victory. After giving up 25 points in the first set alone, Miami tightened up defensively and gave up that many in the third and fourth sets combined for the final 21-25, 25-17, 25-13, 25-12 scoreline.

The triumph allows Miami to move two games ahead of the Orange in the battle for the fourth spot in the ACC standings, which ensured its holder a postseason berth a year ago.

“It was good to see the girls enjoy their last home match,” Miami head coach Jose “Keno” Gandara said after the win. “At this time of the year, every win is a big win. I liked that we played better as the match went on. I don’t think we had the best start. Syracuse is a physical team that challenged us in so many areas, but I thought we responded well.”

Strantzali notched her 11th double-double of the season by adding 11 digs to her match-high 19 kills. Syracuse had three players tied for the team-high feat with nine kills apiece.

“My dream came true, I was telling my teammates that I love the smoke, it was really fun,” a high-spirited Strantzali said. “First of all, I am going to miss our pregame meal and, of course, our fans. They are fantastic and our gym is just so unique to me.

“Syracuse is a physical team and they like to set the middle a lot. Stopping the middles was key for us. The coaches were happy, but they know that we can play a lot better than that and they told us that we may have met the standards today, but we can do a lot better next week.

The defense was key to the victory with Miami holding Syracuse to .078 hitting or worse in each of the sets the Hurricanes won. Senior libero Sylvia Hernandez went out on a high note after being the inspiration to the defensive display with a match-high 22 digs. This was Hernandez’s fourth 20-plus performance of the season. Syracuse’s only senior, Belle Sand, led the Orange with 19 digs.

“It’s been an honor to play for this school to always have my friends and family here to support me,” Hernandez said. “We did start off a little slow and energy was a little low, but once we started doing what we knew and what we’ve been practicing, things just turned around. We just looked at each other and knew that we wanted to win for each other in order to be able to go far this season.”

Syracuse ended the first set on a 9-5 run to take the lead in the match, 25-21. The Orange recorded five blocks in the frame, including a solo effort by Ella Saada to close the set. Bird and Strantzali had five kills apiece to combine for 10 of Miami’s 12 kills in the frame, with the junior picking hers on a much-higher hitting percentage, .455.

A 6-0 run, largely thanks to sophomore setter Hannah Sorensen’s serve, allowed Miami to take a 16-9 lead in set two, forcing two Orange timeouts in the process. The Hurricanes involved sophomore middle blocker Madison in the match more and back-to-back points from her increased Miami’s lead to nine at 21-12. Three straight from Syracuse did not have much effect on the set and the Canes ultimately tied it at 25-17 on an ace by sophomore defensive specialist Sara Duque. The teams went into the locker room, the Canes were outblocked 8-3 by Syracuse and outdug 30-23.

Miami dominated the third set and ran away with it, 25-13. The Hurricanes doubled Syracuse in kills, 14-7, and outblocked them 3-1 in the frame. The Canes hit .414 with only two errors, while the Orange were limited to .000 hitting.

Syracuse was well in the fourth set up until Miami hit double digits at 10-8, but then Strantzali picked up two momentum-amplifying kills that started the Hurricanes’ 15-5 run to the win.

“I am just thrilled and excited and really happy about the day we had today and I am really looking forward to the rest of the season, but this was definitely a bittersweet moment to have our last home match,” senior outside hitter Brooke McDermott said. “I am truly excited for what is to come and to playing out the rest of the season. I will miss playing in home gym and being able to represent my school and my city with this jersey on and the opportunity it has given me.”

Miami’s four-match road trip that will complete the regular season will begin at the University of Virginia and Virginia Tech next weekend. The match against the Cavaliers will be at 7 p.m. on Nov. 17   , followed by a 1 p.m., first serve at Tech on Nov. 19.