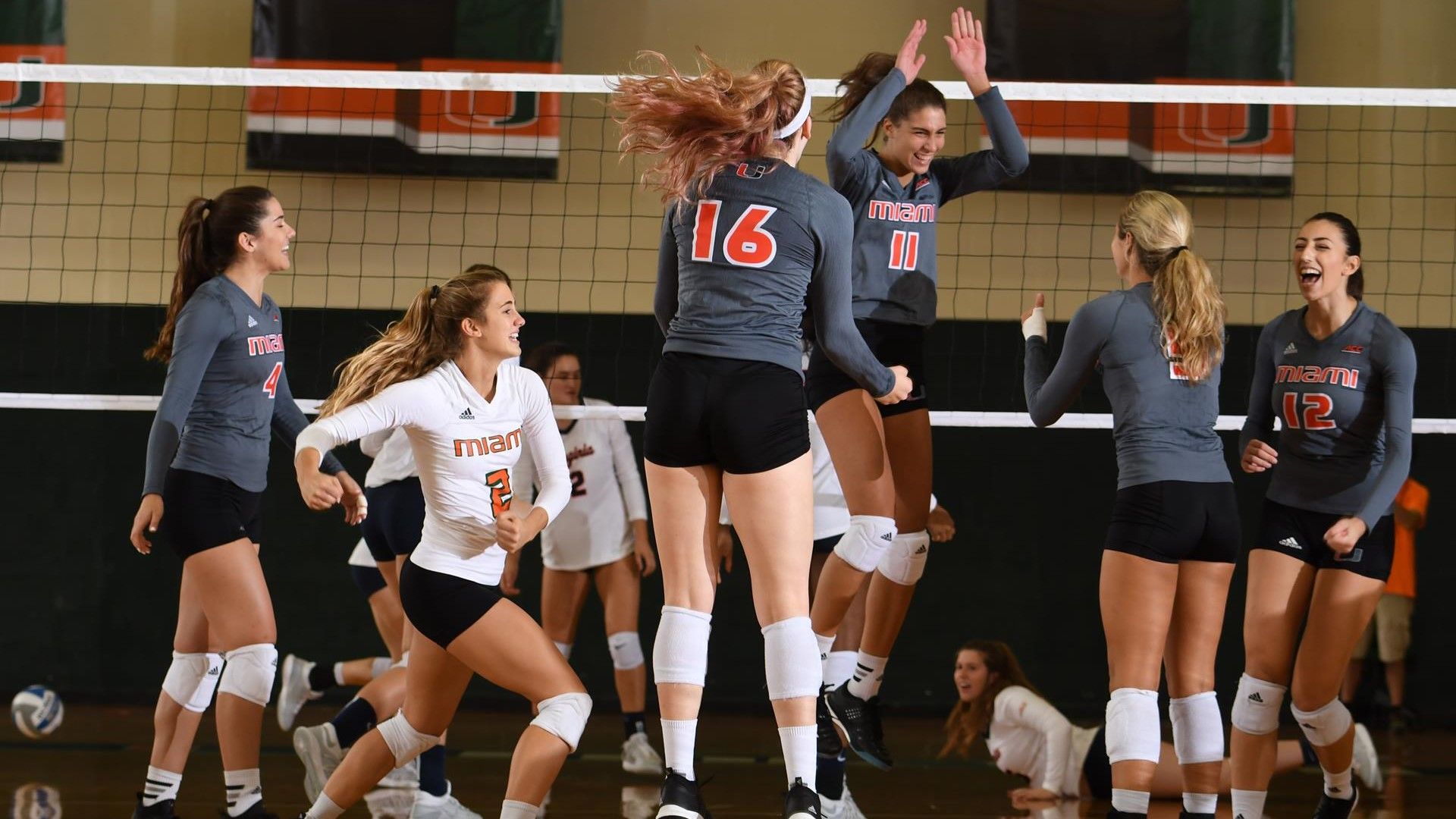 CORAL GABLES, Fla. – The University of Miami volleyball team got its week off to a great start by sweeping its in-state rival Florida State at the James L. Knight Sports Complex Wednesday night.

“It was my last match against FSU, so it means a lot that we beat them,” said senior outside hitter Olga Strantzali, who led the field offensively with 21 kills. “I knew we got much better since the last time we played them and I expected us to win, but I didn’t expect it to be like that. The way we all played made it easy.”

“When we played [in Tallahassee, Fla.], we probably played the worst we have this year,” she said. “Tonight, coming off of two sweeps already, we had a lot more confidence [than last time] and we knew that we could play at a high level and definitely win. We had beaten teams that they lost to, so that gave us an additional confidence boost. But overall, it’s [Miami vs.] Florida State and we are home, so that energy was awesome.”

Redshirt junior setter Haley Templeton, who leads the ACC in assists on the season, averaged a whopping 14.0 assists per set in the match to finish with 42. She picked up a double-double after being one of the two Hurricanes with team-high 10 digs. The other, senior libero Sylvia Hernandez, aided the offensive efforts with four assists and a service ace.

Miami got off to a hot start and never let up, winning the opening frame 25-19. The Hurricanes led by as many as nine and registered four of the last six points to kill the momentum of the Seminoles, who had come within four at 20-16 after a 4-0 run. Strantzali had nine early kills for a Miami offense that picked up 17 kills on .375 hitting.

The second started in similar fashion, but had some drama added to it late on before the Hurricanes wrapped it up at 25-21. Miami entered the final stage of the frame with a 20-12 lead, but the Seminoles went on a 9-3 run late on to eliminate four Canes set points, forcing Miami into a timeout in the process. Two points after play resumed, the Hurricanes benefitted from defensive miscommunication on Florida State’s part that allowed for a Strantzali kill that wrapped up the set.

The final set, which was closely contested from the get-go, went down to the wire. Miami had accumulated a somewhat comfortable lead, but the Seminoles went on to win five out of six points in a stretch that forced a Miami timeout at 24-23. When play resumed, FSU had the ball and a chance to take the set to extra points, but fantastic defense by Bird allowed Templeton to set up Strantzali for the winning kill.

Miami (.336) finished the match with a higher attack percentage than Florida State (.204), despite making 18 attempts more than the Seminoles.

“We played a lot better than the last time we played them and that helped us get a big win here at home,” Miami head coach Jose “Keno” Gandara said. “It’s just a special win. They are the Noles, you know?”

Next up for the Hurricanes is a tough road test at Pittsburgh on Friday. Tipoff in Steel City is at 7 p.m. The Canes are back home on Thursday, Nov. 9, when Boston College comes to the Knight Sports Complex for another ACC matchup.