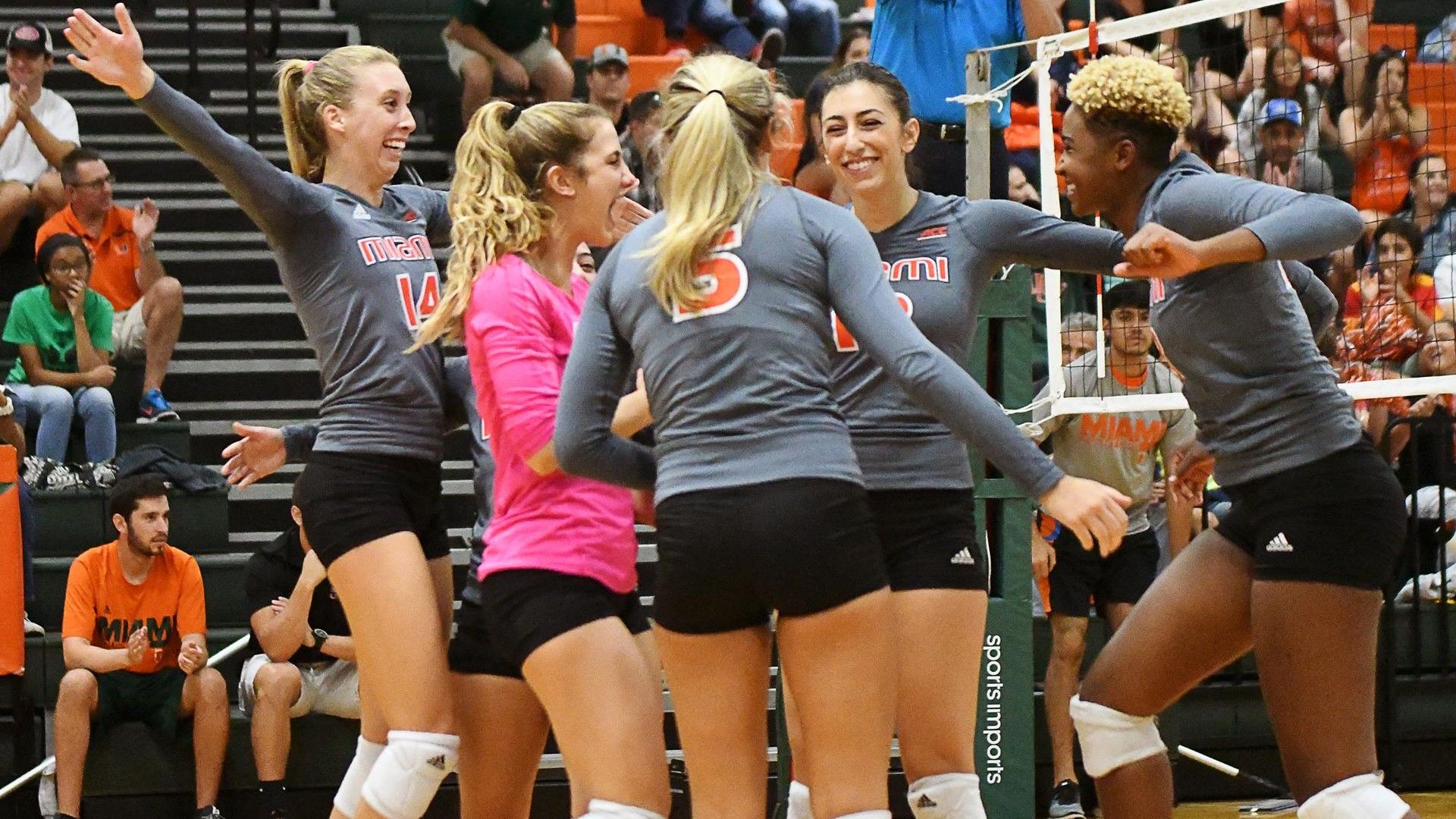 “UNC is a big physical team and they only blocked us four times, which was critical for the win,” Miami head coach Jose “Keno” Gandara said. “I also thought we served well and didn’t make a lot of hitting errors. In general, we got better as the match went on and that’s what we as a coaching staff look for.”

Senior outside hitter Olga Strantzali contributed match-highs on both ends of the ball with 15 kills and 10 digs, which were enough for her eighth double-double of the season. Junior outside hitter Kolby Bird finished in double figures as well with 11 kills. Strantzali and Bird combined for 26 kills, three short of UNC’s total in the match.

“Everything worked well for us today, not just for me,” Strantzali said. “We didn’t pass as well as we can, but we found some solutions for that. We took some good swings and that helped us a lot. Our block also made it easier for us to defend UNC.

“We watched film yesterday, so we knew where they hit, how they serve and how they block, so we were well-aware of what they do and came here prepared today.”

Redshirt junior setter Haley Templeton had seven kills on a .700 hitting display to add to her match-best 34 assists, while redshirt freshman outside hitter Elizaveta Lukianova tallied six kills, which was ACC-best for her and doubled her 1.00 kills average in conference action.

“It’s going to take a team effort to do what we want to do and, fortunately, I see it every week,” Gandara said. “I knew Liza has been getting better and better and Brooke [McDermott] has been doing well, so it’s healthy competition at that position, just like Kolby and [Cameron Dobbs] and [Madison Dill and Lucia Pampana] in the middle. I think we have some depth and on any given night we can call on them and they will be ready.”

Beth Nordhorn and Taylor Leath were UNC’s most productive attackers with eight kills apiece with the former achieving feat on team-best .500 hitting.

Miami had six players with at least four digs, culminated with Strantzali’s 10. Those included senior libero Sylvia Hernandez (9), Bird (8), Templeton (6), Lukianova and sophomore defensive specialist Sara Duque (both with four). Leath and Casey Jacobs both had nine for the Tar Heels.

Senior middle blocker Sakile Simmons and UNC’s Katharine Esterley shared the match-best achievement of three blocks, while the teams were also locked at 4-4 on the day.

With six occasions on which a team scored at least three points in a row, the first set was a story of runs, which had a happy end for Miami, 25-20. The Hurricanes picked up a five-point lead early on, but a 6-0 North Carolina run tied it at 14 in mid-set. An 8-1 run featuring multiple UNC attack errors swung the momentum back to Miami’s side of the net and the Hurricanes managed to close the set while holding the Tar Heels to .161 hitting. Strantzali accounted for five kills to lead a Miami team that hit .423 in the opening frame.

Miami started the second set by winning the first four points in it and enjoyed a 9-1 run later on to create a very comfortable cushion at 19-11. UNC put a string of five points together to come within three, but big plays from Bird, Templeton and Strantzali relieved the pressure and allowed the Canes to take the set 25-18. Going into the intermission, Miami had double-digit advantages in kills (30-20), assists (29-19) and digs (29-18).

The Canes came out of the intermission and the same way they went into it – as the better team on the court. Miami hit .344 in the frame to win it comfortably 25-18 for the first win over the Tar Heels since 2013. The teams were last tied at six apiece following a 5-1 UNC run, but the Hurricanes kept up their attacking efficiency to quickly jump back into the lead. Miami’s largest lead was eight and when that forced a Tar Heels timeout at 18-10, UNC was hitting in the red at -.062. The visitors increased improved their offensive efficiency after the resulting timeout, but never challenged the Canes, who improved to 6-2 in three-set matches.

“Playing at home really helps us a lot because all of our fans are here and it’s super awesome,” Bird said. “We realized after the three straight losses earlier this month and then the loss to Notre Dame that we have got to pick it up if we want to make it to the tournament. That is our final goal and we know what we have to do to achieve it, so I think that helped us this weekend.

“These two wins were huge for us and we need to keep it up for the rest of the season, but they definitely gave us more confidence going into next week.”

The Hurricanes close out their five-match homestand with a contest against in-state rival Florida State at 6 p.m. Wednesday night.