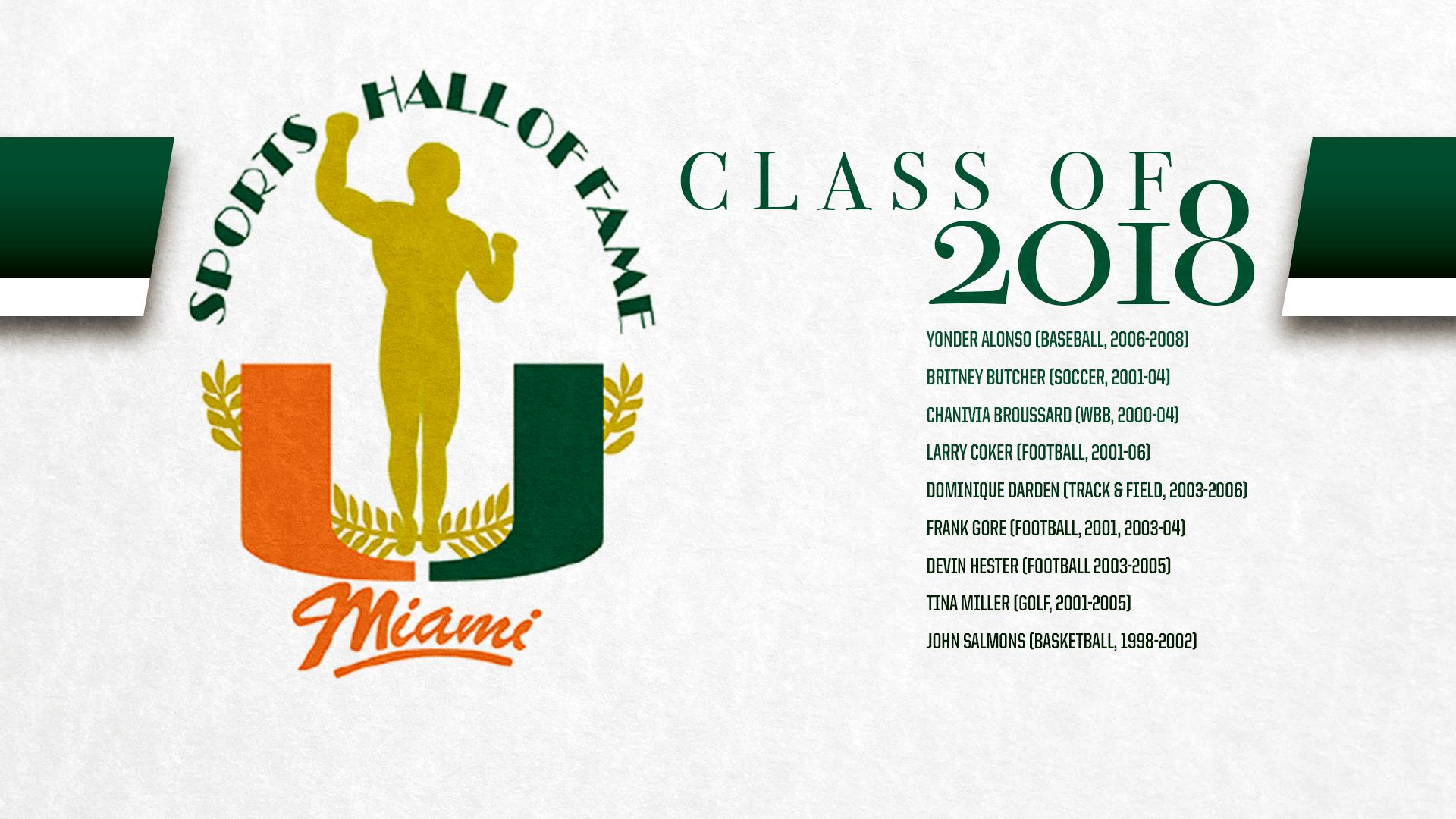 CORAL GABLES, Fla. — The University of Miami Sports Hall of Fame has announced the Class of 2018 inductees for the 50th Annual UMSHoF Induction Banquet this coming spring.

“As president, I’m pleased to introduce this great class of University of Miami Sports Hall of Famers for 2018,” said UMSHoF President Tracy Kerdyk.   “We invite all Hurricane fans to join us next spring at our 50th anniversary induction banquet, as we welcome the newest members into the Hall of Fame.”

This year’s class will be formally introduced during an on-field ceremony at the end of the first quarter of the Miami-Syracuse football game on Sat., Oct. 21 at Hard Rock Stadium, as part of the “Hall of Fame Game” ceremonies.

The 50th Annual UMSHoF Induction Banquet will be held in either late March or April 2018. For information, please contact the UMSHoF at 305-284-2775.

The University of Miami Sports Hall of Fame is a non-profit organization founded in 1966 by eight Dade County Circuit Court judges, all University of Miami alumni. The founders wanted to establish an organization that would recognize those student-athletes, coaches and administrators who excelled at their sport and brought acclaim to the University through their achievements and championships. With the addition of the Class of 2018, only 318 honorees have been inducted into the UM Sports Hall of Fame.

Chanivia Broussard      Basketball            2000-2004
A two-time All-BIG EAST selection, Chanivia Broussard ended her UM career with 1,482 points, which currently ranks 10th all-time.  She still ranks among the program’s best in field goals made (10th, 621), field goals attempted (10th, 1,398), and blocks (fourth, 132).  She was named to the BIG EAST Freshman team after leading the team in scoring (13.2 points per game). Broussard became the 15th Miami player to reach the plateau of 1,000 career points in her junior season, and led the Canes in scoring both as a freshman and a sophomore.

Larry Coker                    Coach                2001-2006
The head coach of the 2001 National Championship team, Coker had a six year record of 60 wins against 15 defeats…the 80% winning percentage ranks third all-time in Miami history behind only UMSHoF member coaches Dennis Erickson (.875) and Jimmy Johnson (.852).  Coker was the first coach to win his first 24 games since Walter Camp in 1888-1889, and was the second coach in NCAA history to win a National Championship in his first year of collegiate coaching.  The winner of the 2001 Bear Bryant Coach of the Year and the American Football Coaches Association Coach of the Year awards, he led Miami to three BIG EAST Championships and was 8-2 versus archrivals Florida and Florida State.  UM’s offense set school records for most points scored in both 2001 and 2002.  As offensive coordinator (1995-2000) and head coach (2001-2006), he helped recruit many of the amazing athletes that helped Miami regain its national prominence in the college football world, including 22 members of the UM Sports Hall of Fame and 23 All-Americans.

Dominique Darden        Track and Field                  2003-2006
Dominique Darden holds the distinction of being the Miami program’s most honored All-American, having been selected a career total of 15 times – 10 times as an outdoor All-American (highest in school history by four selections) and five times as an indoor All-American (second, just one behind the all-time leader).  She set the school record in the 400-meter outdoor hurdles in 2006, a mark that is currently second all-time, and set the indoor 400-meter record, now third all time.  Dominique holds the third-best time in the indoor 60-meter hurdles and is fourth in the indoor 55-meter hurdles.  She helped set school-record times in these events: outdoor 4 x 400, outdoor 4 x 200, outdoor 4 X 400, outdoor sprint medley relay, and the indoor 4 X 400.

Frank Gore                     Football            2001, 2003-2004
As a true freshman and backup to UMSHoF member Clinton Portis for the 2001 National Champions, Frank Gore totaled 820 yards on just 62 carries (a 9.3 average) with five touchdowns and was named The Sporting News BIG EAST Freshman of the Year.  After redshirting in 2002, he came back in 2003 to rush for 100 yards in each of the first three games, becoming the first UM back to accomplish the feat.  He gained 468 yards before suffering a season-ending injury in Miami’s fifth game.  Gore led the Canes in 2004 with 945 yards on 199 carries and rushed for eight touchdowns, and totaled 1,975 yards for his career.  His 5.68 yards per carry average is the sixth-highest average in school history.  Gore is in his 13th season in the NFL, currently with the Indianapolis Colts, and just recently became the league’s seventh leading rusher of all time with over 13,000 career yards.

Devin Hester                  Football            2003-2005
Devin Hester was one of the most electrifying and explosive all-purpose players in UM history as a three-way threat on offense, defense and special teams.  Named a 2004 All-American by Walter Camp, The Football Writers Association and The Sporting News, as he returned four kicks for touchdowns (three punts and one kickoff) and returned 19 punts for 326 yards, good a 17.2 yard average – the fifth-best in the country. He ranked third nationally with 15 kickoffs for 389 yards and a 26.9 yards-per-return average.  He was named first-team All-ACC in 2004 as a kick returner and even played as the nickel back on defense, leading the team with four interceptions.  In his career, he is tied for first with two career kicks returns for touchdowns and second all-time with four career punt returns for touchdowns, fifth in career punt return yards (638 on 41 attempts) and ninth in all-time career kick return yards.  Selected in the second round of the 2006 NFL Draft, Hester became the greatest return specialist in NFL history, setting records for most punt returns for touchdown (14) and total special teams returns for touchdown with 20 (five kickoffs, 14 punts, 1 missed field goal).