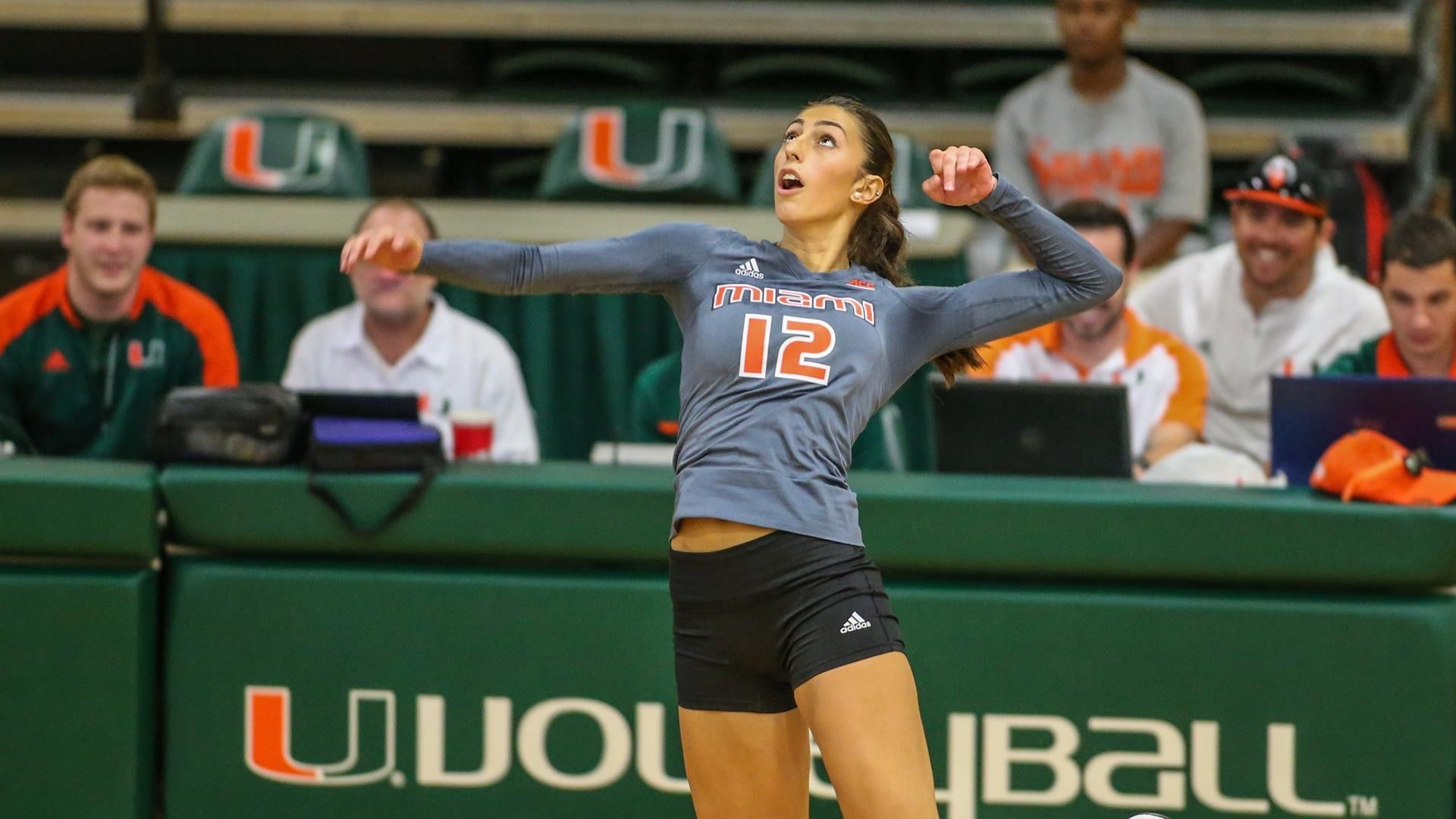 Canes Come Out on Top in Season Opener

CORAL GABLES, Fla. – The University of Miami volleyball team overcame a slow start for a 3-1 comeback win over Little Rock in its first match of the Southern Miss Invitational.

Strantzali was the only Hurricane with double-digit kills on the attacking end. Her 22 kills equaled a combination of the total of Little Rock’s leading scorers, Marina Avram and Veronica Marin, who had 11 apiece.

Freshman outside hitter Cameron Dobbs began her Miami career with nine kills and two service aces. In addition, her 14 digs made Dobbs one of the three Hurricane players who finished the match with double figures in digs. She was joined by senior libero Sylvia Hernandez, who had match-high 19 digs, and redshirt junior setter Haley Templeton with 10 digs. Templeton returned to the starting lineup to orchestrate the Canes’ attack and finished the contest with 39 assists and four kills, outdoing her counterpart Taylor Lindberg by seven and two, respectively.

Junior middle blocker Lucia Pampana led the team with six blocks, which was tied for most in the match. She and sophomore Madison Dill picked up the Hurricanes’ two solo blocks in the opener.

The Canes never led in the opening set of the season and were last on level terms in it at 2-2. The U went on a 3-0 run early on through kills by Strantzali and sophomore middle blocker Dill to half the Trojans’ six-point lead at 9-6, but a service ace by Little Rock’s Taylor Lindberg restored her team’s lead at 14-8. Junior middle blocker Pampana and sophomore outside hitter Elizaveta Lukianova teamed up for two blocks and Strantzali added an ace in a late run, but Miami could not erase the double-digit deficit it faced and dropped the set, 25-20.

Miami head coach Jose “Keno” Gandara made a change at the start of the second set, handing Dobbs her official debut as a Hurricane. Dobbs contributed three kills as Miami cruised to a 25-16 success in the set. With the teams tied at six apiece early on, the Hurricanes used strong serving to go on a 11-2 run to take control of the set. Hernandez contributed three service aces in the process. Eventually Miami fought its way to a double-digit lead at 21-11, setting the tone for the remainder of the set, which came to a close after another Strantzali kill.

Little Rock enjoyed a much better start to the third set, winning the first four points of it. Nevertheless, Miami managed to tie the score at 14 all on a handling error by the Trojans’ setter. The Trojans won the following two points to swing the momentum in their favor, but the Hurricanes responded once again and eventually earned their first lead on another block by Pampana and Templeton, 18-17. The set featured five additional tied scores – the latest at 22-22 – but the Canes came out on top 25-22 after Strantzali’s 17th kill and back-to-back points from Dobbs.

As in the first and third sets, the first point of the fourth set went to Little Rock and shortly after the Trojans had a two-point cushion, 3-1. Big plays from Strantzali tied the set and then gave Miami its first lead at 4-3 before a kill by Little Rock’s Daisha Gillard tied the score for the last time in the match at 4-4. Miami took the initiative, but struggled to pull away until a 7-0 run on Dobbs’ serving sequence gave the Hurricanes some cushion, 15-7. The Canes’ lead increased to 11 points on five occasions – incuding on kills by Dill, Lukianova, Dobbs and Pampana – before Miami’s only freshman completed the comeback with the team’s ninth ace of the match, 25-13.

Miami will not have long to enjoy the victory since the Hurricanes will play a second match Friday – against tournament host Southern Mississippi at 8 p.m. EST. The Canes will complete the opening weekend with a match against Nicholls State at 11 a.m. Saturday.