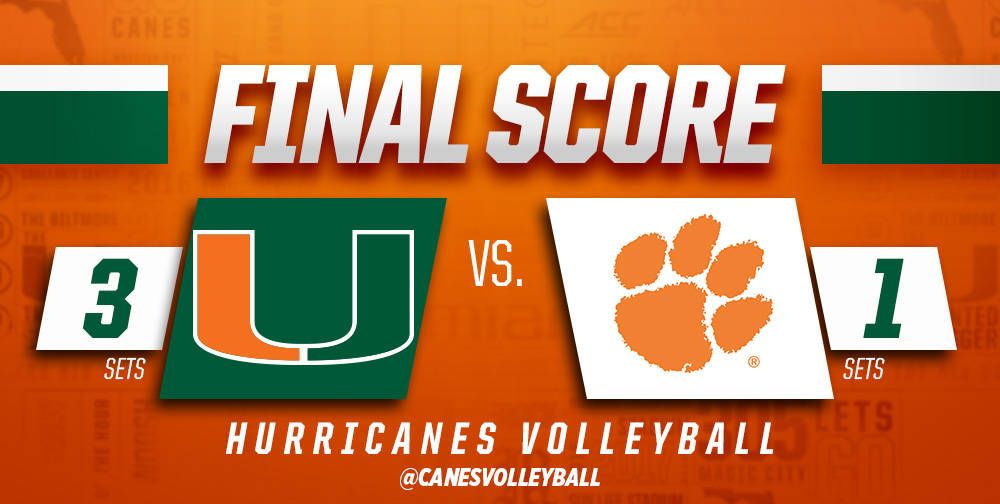 CORAL GABLES. Fla. – The University of Miami volleyball team earned a four-set win over Clemson on Friday afternoon to close out its 2016 schedule with a victory.

Miami responded in the second set, jumping to a 13-5 lead and forcing a Clemson timeout. The Canes kept pushing and extended their lead to 10, 21-11, and closed out the second set win, 25-14, to head into the break tied at one set apiece.

“It’s unusual to end the year with a win, but it sure was nice to see how they recovered from Game 1 and playing the way we expect them to play,” Miami head coach Jose “Keno” Gandara said. “To finish the season playing like that was, for sure, gratifying.”

Olga Strantzali led the way for Miami once again, tallying 23 kills, 14 digs, and two service aces. The double-double was Strantzali’s team-best 14th of the season. The junior finished the season with 586 kills, second most in a single-season at Miami.

Anna Haak notched her 10th double-double of the season, finishing with 16 kills, 10 digs and a service aces. Kolby Bird added eight kills, a career-high 15 digs, two assists, a block and a service ace.

“They showed maturity and an understanding of their role,” Gandara said. “They’re learning to do it in certain situations, particularly when things don’t start off the way you wanted and being able to recover and understand that every play and game is different. You always have the opportunity to correct and have a good day.”

Lucia Pampana and Madison Dill were forces in the middle for Miami. Pampana had eight kills and two digs, while Dill had four kills and a team-high four blocks.

Sylvia Hernandez had 13 digs as Miami’s libero, while Sara Duque had three digs and an assist. Carly Davey had a dig, an assist and tied her career-high with two service aces.

“It’s exciting to have this group come back and they’re a great group of girls,” Gandara said. “They learned a lot this year and we will get some time in the spring to continue to get better. We also add some new girls, too, so I am excited about the future.”