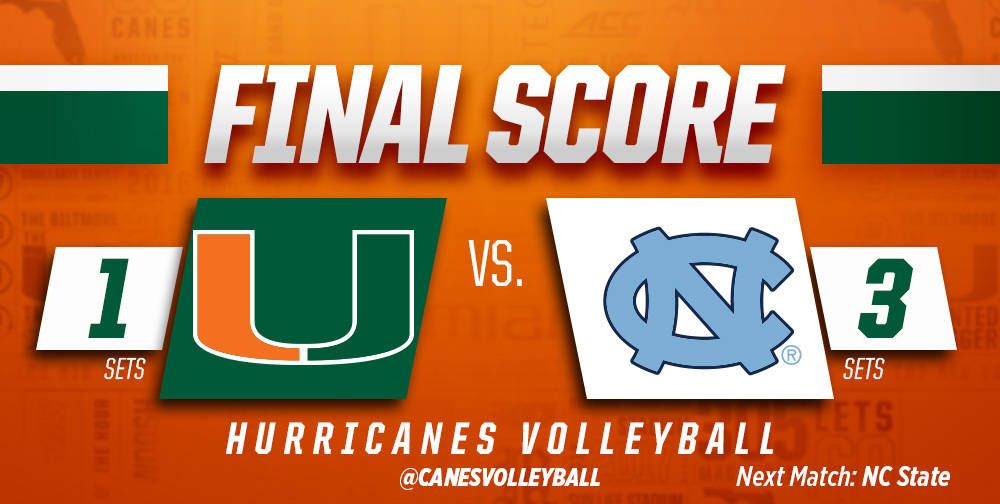 CORAL GABLES, Fla. – The University of Miami volleyball team dropped an exciting match to No. 12 North Carolina on Friday night.

“The numbers show that we are getting better and we made them play better, so we know that we are improving,” Gandara said. “Winning a game after losing the first two against a team that was under control gave us a lot of confidence and I think it showed most of the fourth game. Unfortunately, we couldn’t close it out.”

“I thought we played pretty well, at times, in Games 1 and 2, but we were playing a team that doesn’t give you many breaks,” Gandara said. “We started serving better and got a better sense of their lineup. We should have had that fourth game, but they’re a good team.”

Olga Strantzali led the Canes with 24 kills on a .352 attack percentage. The junior outside hitter also had 10 digs and a block to record her ninth double-double of the season.

“The team is getting better, so I am getting better,” Strantzali said. “The other teams are focusing on other players, too, so it makes it a little easier for me. I have kept working hard and things will only get better. I am excited for the future.”

Outside hitter Anna Haak recorded her sixth double-double of the season, finishing with 13 kills, 14 digs, two blocks and an assist. Kolby Bird had three kills, a block and a dig while playing opposite for the Canes.

Hannah Sorensen dished out 45 assists and added 10 digs to register her fifth double-double of the season. Miami libero Sylvia Hernandez had 11 digs, three asissts and a service ace, while defensive specialist Sara Duque had five digs and an assist.

Friday’s match also marked the beginning on Volleyball Alumni Weekend. Hurricanes from as far back as the 1974 season returned to Coral Gables for Friday night’s match and were recognized at the intermission for their contributions to the program.

Miami is back in action on Sunday, when it host NC State at 1 p.m., in a match that will be broadcast on ACC Network Extra. Following this weekend’s matches, the Hurricanes hit the road for a pair of road contests in the northeast. Miami will play at Syracuse at 7 p.m., on Nov. 11 and will take on Boston College at noon on Nov. 13.